Bulls remained in control of D-Street for the seventh consecutive day in a row on Friday, the longest winning streak seen so far in 2020, that pushed benchmark indices above crucial resistance levels.

The S&P BSE Sensex reclaimed mount 40K, while Nifty50 closed above 11900 levels and is on track to retest record highs by December 2020.

Even though broader market indices closed with a negative bias in a blockbuster week, the action was seen in individual stocks. There are over 20 stocks which bucked the trend and rose 10-40% in the same period.

“Markets during the week witnessed a remarkable upmove as there were gap up openings on many days and market closed higher every day. But, this week’s rally was somewhat non-participative in terms of stock participation from Nifty50 which was less than half,” Nirali Shah, Senior Research Analyst, Samco Securities told Moneycontrol.

“Mid and smallcap stocks too showed mellow interest in the rally. Moreover, DIIs were on a selling spree and dumped equities worth Rs. 2000 cr. The up-move was buoyed by FIIs who pumped in approximately Rs 5000 cr from the start of October,” she said.

Shah further added that it is safe to infer that the current rally is slowly ageing and is currently on life support due to the FPI inflows. Investors should approach the overall market in a cautiously optimistic manner on the back of weaker internal strength.

As many as 22 stocks in the S&P BSE 500 index that rose 10-40 percent for the week ended October 9 which include names like AU Small Finance Bank, Dr Lal Pathlabs, PNB Housing Finance, Alok Industries, and Throcare Technologies, among others. 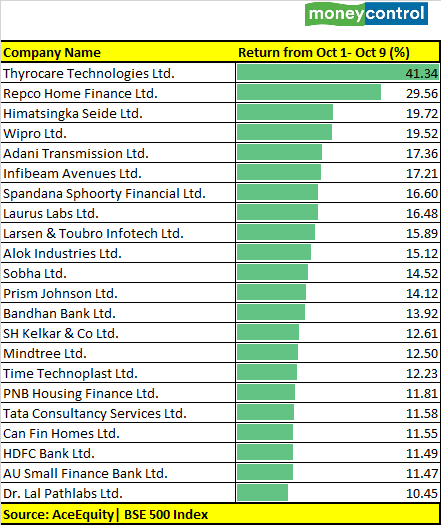 Markets are trading currently at their peak, aided by fast recovery of economic activities, robust Q2 results from India Inc., and expectations of stimulus from the US govt, as well as the Indian government ahead of the festival season.

The coming week will be dominated by Q2 results from India Inc. as well as microdata such as Industrial Production Data for August, September CPI inflation data on Monday, followed by September WPI numbers on Wednesday.

“Over the week, benchmark indices have ascended to new high supported by the restoration of industrial activity near pre-COVID level, a good start to Q2 result, in anticipation of stimulus in India and positive monetary measures by MPC,” Vinod Nair, Head of Research at Geojit Financial Services told Moneycontrol.

“Markets are expected to continue their rally in the short-term in anticipation of further measures from the Indian government to provide a bonanza of a stimulus. Upcoming hearing of moratorium is also expected to drive the domestic market next week,” he said.

The Nifty50 started the week with a positive gap (11417-11452) and continued to inch northward throughout the week. As a result, the index formed a bullish belt hold line candle, indicating the acceleration of upward momentum.

In the process, the index completely retraced the preceding four week’s corrective phase in just two weeks. Experts see Nifty50 retesting record highs by December 2020, and the crucial support is placed at 11500 levels.

"The index has rallied 1150 points in just 10 trading sessions during the ongoing up move (off September low 10790) which hauled daily stochastic oscillator in overbought territory (at 94). Thus, the possibility of a temporary breather at 12000-12100 range cannot be ruled out," he said.

Shah further added that such a breather should not be construed as negative as the broader structure remains positive. Instead, dips should be capitalized as an incremental buying opportunity in quality stocks amid the ongoing Q2FY21 result season.