There are as many as 49 stocks in the BSE500 index which rose 10-50 percent. These include HEG, Hindustan Copper, Parag Milk, Jindal Stainless, Shipping Corp of India, Coffee Day, Wockhardt, MMTC, and India Tourism, among others.

"Investors are overtaking the suffered mid and smallcap shares giving hopes to their cheaper valuations in position to their largecap combinations. During the last few sessions, the MidCap index has gained 3 percent and the SmallCap index has gained 4 percent," Mustafa Nadeem, CEO Epic Research said.

"At this point in time, no one would like to catch a falling Knife which is what Smallcaps and Midcaps are looking like. These indexes are under a correction mode and after having a bearish momentum for almost 7 quarters valuations are at very attractive levels. The long term view is still intact as this space offered returns in 4 digits in some of its stocks," he said. 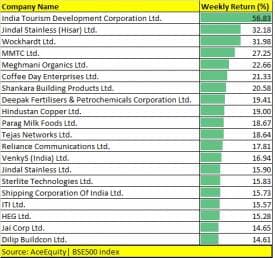 Ease in trade war tensions, expectations of dovish policy from the European Central Bank and US Federal Reserve, muted macro data lifted hopes of a bigger rate cut from the Reserve Bank of India, and, in turn, hopes for additional stimulus measure from the government lifted sentiment.

The Finance Minister will hold a press conference on September 14. She is expected to announce a sector-specific measure to boost faltering growth in Asia’s third-largest economy.“Markets this week had experienced a sentimental U-turn. Global and domestic macros are witnessing stability from all corners – Be it crude prices or the US-Sino trade war tensions or low-interest rates, good news coming from all corners. However, despite Government’s efforts to boost the economy, Mr. Market seems rather unhappy and is unwilling to move significantly higher,” Jimeet Modi, Founder & CEO, SAMCO Securities & StockNote said.“Market is waiting for the festive season to gauge how the consumer spends pans out and whether there is a change in sentiments at the bottom of the pyramid. Till then the bourses are expected to be largely sideways in a broad trading band,” he said.

The Nifty50 formed a bullish candle on the daily as well as weekly charts. It closed above its crucial short term moving averages such as 5-days exponential moving average (EMA0, 13-days EMA, and 20-EMA.It reclaimed 11,000-11,050 levels but failed to close above Thursday’s intraday high of 11,081 levels which suggests selling pressure at higher levels.

The bias for the coming week remains positive and with broader markets outperforming suggest that the momentum should sustain, experts suggest. India VIX fell by more than 5 percent on Friday to close at 14.12.

“The Nifty50 gained over a percent amid volatility and settled at 11,075.90. The bias remained positive almost for the entire week and the majority of sectoral indices contributed to the move. Besides, the broader indices too witnessed noticeable recovery and settled with decent gains,” Ajit Mishra, Vice President Research, Religare Broking told Moneycontrol.