Despite muted GDP growth hitting over a six-year low, and surprise pause from the Reserve Bank of India (RBI), the market remained resilient.

After hitting a record high in the last week of November, the Indian market started December on a muted note with benchmark indices testing their crucial support levels in the week ended December 6.

The Nifty closed in the red in four of the five trading sessions for the week ended December 6, but the big carnage was seen in the small and mid-cap stocks.

In the mid-cap space, as many as six stocks fell over 10 percent which include names such as Central Bank of India, NBCC, BHEL, Union Bank of India, Jindal Steel & Power, and HUDCO. 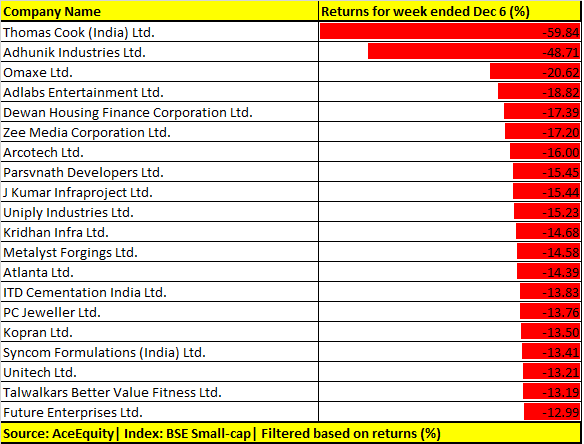 Despite muted GDP growth hitting over a six-year low, and surprise pause from the Reserve Bank of India (RBI), the market remained resilient. The Nifty closed above its crucial support at 11,900 levels for the week ended December 6 which is a positive sign.

“Markets stayed resilient in spite of GDP weakness and negative macros but by the end of the week, inflation became a scapegoat that caused the hammering in the markets,” Jimeet Modi, Founder & CEO, SAMCO Securities & StockNote told Moneycontrol.

“In fact, RBI’s status quo acted as a mood spoiler; an interest reduction was very much needed to kick start the economic engine but RBI threw the ball back into the Government’s court which actually cracked the whip on the market,” he said.

But, experts feel that consolidation in the market is likely to continue in the coming week as well, and the risk-to-reward is slightly in favour of going short on the Nifty in the near term.

Profit booking was evident across the board with indexes such as Energy, Midcap, Smallcap, Auto, and metals eroding a quarter to half of their last three months gain. The global cues were negative while domestic events added further concerns over the economy.

“Investor should be cautious at this point in time as a failure of Nifty to sustain at previous all-time-high gives a major bearish indication. A close below 11,850 in the coming days would completely reverse the trend in favour of the bears and lower targets can be seen towards 11,200 - 11,250. While 12,100 continues to be a resistance,” Mustafa Nadeem, CEO, Epic Research told Moneycontrol.

Mazhar Mohammad, Chief Strategist – Technical Research &amp; Trading Advisory, Chartviewindia.in said that for time being upsides shall remain capped around 12,081 levels and strength should not be expected unless it closes above the said level.

"Therefore positional traders can continue to remain short on the index with a stop above 12,000 levels on a closing basis and look for a bigger target placed around 11,730," he said.

Stock Recommendations with a time horizon of six months:

The stock has recently resolved out of the falling channel containing the entire decline seen in the last six months, indicating the termination of the secondary corrective phase and resumption of the primary uptrend.

The corrective decline from the all-time high of June 2019 (827) saw the stock forming a higher base at the previous major breakout area of Rs 625. This highlights the change of Polarity as previous resistance reverses its role and acts as a support.

Post the corporate tax cut announcement on September 20, the stock witnessed a faster retracement as 7-week’s decline (740-625) was completely retraced in just 2-weeks. A faster retracement of the last falling segment signals a positive price structure.

Based on the technical observations, we expect the stock to continue its current up move and head towards 870 levels as it is the 123.6 percent external retracement of the entire decline (827 to 625)

The share price recorded a faster retracement of the last leg of decline (1,519-1,130) as over the past 15 weeks, it entirely retraced preceding 28-week’s decline.

This structural improvement augurs well for the acceleration of an upward momentum towards our earmarked target of Rs 1,890 in the coming months.

A key point to highlight during the second phase is that the stock has corrected on the back of below 50-week average volume. In contrast, during the recent faster up move the volume has picked up and gone above twice the 50-Weeks average volume, indicating revived buying demand at elevated support base.