Laxmi Organic has already risen 223 per cent from its issue price of Rs 130 from the day of listing. Even after a stellar rally, experts largely feel it is a long-term bet and suggests a buy-on-dip strategy. In the near term, it can cross the Rs 500-mark soon.

Specialty chemical company Laxmi Organic Industries has staged a blockbuster performance among the IPOs that were listed in 2021. The stock has rallied 223 per cent from its issue price of Rs 130 in five months, from the day of listing.

In fact, even in comparison with the BSE500 stocks, it has been the biggest gainer in five months. This is largely due to its robust June quarter earnings and healthy order book.

In the same five months, the BSE Sensex has gained 19 percent, BSE Midcap index 18 percent and the Smallcap index 31 percent.

Laxmi Organic, a leading manufacturer of acetyl intermediates and specialty intermediates, enjoys a 30 percent market share in the segment. It reported superb Q1FY22 numbers, with a profit of Rs 102.3 crore, which is Rs 25 crore less than the profits reported for the entire FY21.

At the operating level, earnings before interest, tax, depreciation and amortisation (EBITDA) surged 246 percent YoY and 128 percent QoQ to Rs 145.3 crore in the quarter ended June 2021, while EBITDA margin stood at 19.73 percent in Q1FY22, expanding by 933 bps YoY and 747 bps QoQ.

"The strong growth in revenues was fuelled by a 102 percent and 126 percent YoY growth in acetyl intermediates (AI) and specialty intermediates (SI), respectively. The strong performance in the AI business is attributable to higher realisations, whereas the SI business was driven by both volumes and pricing. The SI business recorded the highest volumes this quarter and delivered 20 percent export revenue. The demand from end-user industries also remained strong," said Ravi Goenka, Chairman & Managing Director, in the company's BSE filing on August 10.

Even after a stellar rally, experts largely feel Laxmi Organic is a long-term bet and suggests a buy-on-dip strategy. In the near term, it can cross the Rs 500-mark soon. 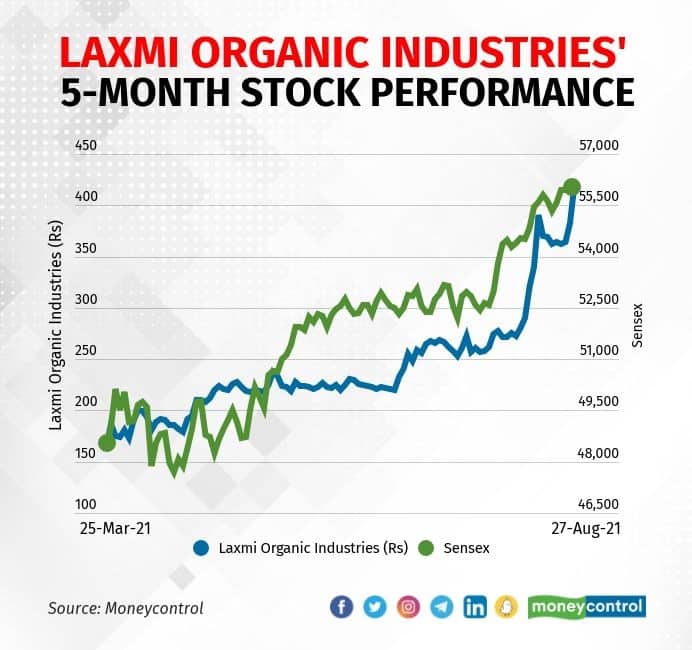 "The company's order book is full, compared to its capacity for the next 1-1.5 years, which means the company will continue delivering good numbers. Also, the company is fundamentally very strong with a return on equity (ROE) of 17.4 percent and return on capital employed (ROCE) of 20.2 percent. The company is almost debt-free with a debt-to-equity ratio of 0.14. So we consider Laxmi Organics a good bet for the long term," said Rahul Sharma, Co-Founder at Equity99.

However, "we don't recommend buying at current levels as the stock has rallied almost 52 percent in 12 sessions. We suggest a buy-on-dip strategy on this counter for good long-term returns," he added.

Ashis Biswas, Head of Technical Research at CapitalVia Global Research, said that very little impact of the results was seen on the company's business despite the lockdowns in the country.

"Although the company has kept a control on its borrowings and its debt-to-equity ratio is also good, we have observed an increase in its current liabilities which needs to be checked soon. Overall, the chemical industry has grown in the recent past and with demand for its products growing, Laxmi Organic looks to hold all the R&D and infrastructural quality to grow further," said Biswas.

On the charts, Laxmi Organic has given a breakout of an ascending channel. Although the stock can correct from a small-time perspective due to a sudden spike in price, he believes investors can hold the stock with a Rs 500 target for 3-6 months.

Laxmi Organic Industries launched its IPO in March 2021 and has raised Rs 600 crore through its public issue. The IPO had seen a stellar response from investors, subscribing 107 times.

It is the only manufacturer of diketene derivatives in India with a market share of approximately 55 percent of the Indian market. The acetyl intermediates segment includes ethyl acetate, acetaldehyde, fuel-grade ethanol and other proprietary solvents, while the specialty intermediates comprises ketene, diketene derivatives, namely esters, acetic anhydride, amides, arylides and other chemicals.

Its products find application in several industries, including pharmaceuticals, agrochemicals, dyes and pigments, inks and coatings, paints, printing and packaging, flavours and fragrances, adhesives and other industrial applications.

Disclaimer: The views and investment tips expressed by investment expert on Moneycontrol.com are his own and not that of the website or its management. Moneycontrol.com advises users to check with certified experts before taking any investment decisions.
Sunil Shankar Matkar
Tags: #Laxmi Organic Industries #Market Edge #Stocks Views
first published: Aug 31, 2021 01:46 pm