A strong week for Indian markets where benchmark indices closed above their crucial resistance levels. The S&P BSE Sensex reclaimed Mount 36K while the Nifty50 is now back above 10,553-10,600 levels while investors preferred to book profits in small and mid-caps.

The Nifty50 recorded its third consecutive week of gains. The index closed with gains of 2.1 percent while the S&P BSE Sensex rose 2.4 percent for the week ended July 3.

There are as many as 62 stocks in the S&P BSE Small-cap index that rose 10-30 percent for the week ended July 3 that include names like Andhra Paper, Responsive Industries, Reliance Communications, Ballarpur Industries, and Bharat Dynamics, etc. among others. 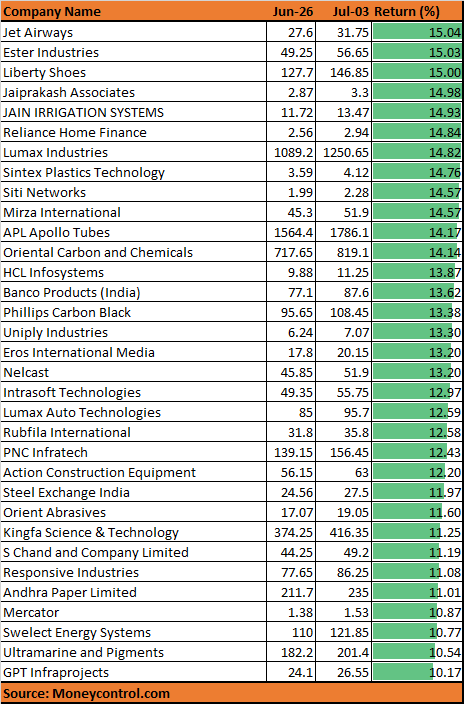 However, analysts suggest investors take the outperformance with a pinch of salt as the recent momentum could be news-driven as well as excess liquidity, and they could soon see a reversal.

Small and mid-cap stocks have not just outperformed in June but have also given double-digit returns so far in the year 2020.

"Anecdotally, it is seen that mean reversion plays its part in stock markets where prices tend to move to the average price over time," Umesh Mehta, Head of Research, Samco Securities told Moneycontrol.

"Since prices of small and mid-caps had moved higher fast just like the frontline stocks, it is expected that the fundamentals would not rise that fast and therefore will fall and revert to the average prices once the correction begins in Nifty. Hence, the outperformance in small and mid-caps may reverse over time," he said.

The Nifty50 rose for the third consecutive week in a row. Sectorally, auto, NBFC, and FMCG outshone during the week while metal, Pharma and PSU Banks underperformed.

Experts see the momentum to continue and Nifty50 could well rally towards 200-DMA or 10,900 levels. Crucial support for the Nifty50 is placed at 10,200 levels.

India VIX (which gauges market sentiment) extended its losses and settled below 200 days EMA for the first time since February 2020, indicating dwindling volatility, which signifies the continuance of risk-on sentiment.

“In the coming weeks, we expect the index to resolve higher and extend the ongoing up move towards 10,900 which is the confluence of 200-days SMA, placed at 10,890, coincided with negative gap seen during mid-March (10,827–10,752). We have turned constructive on the markets,” says Shah.