Indian markets closed in the red for the seventh consecutive week. The S&P BSE Sensex fell by over 7 percent while the Nifty50 was down by 6.6 percent for the week ended April 3, but broader markets relatively outperformed in the same period.

The S&P BSE Mid-cap index was down a little over 3 percent while the S&P BSE Small-cap index saw a dip of nearly a percent for the week ended April 3.

There are as many as 49 stocks in the S&P BSE 500 index which have outperformed in a truncated week. These include names such as Inox Wind, Sun Pharma, Ipca Laboratories, Lupin, Delta Corp, Sobha, Graphite India, and KRBL, data from AceEquity showed.

Sectors which saw buying interest were healthcare, pharma, consumption as well as oil & gas stocks thanks to steep fall in crude oil prices. Selling pressure was evident in financials including public and private banks, IT, and metal stocks. 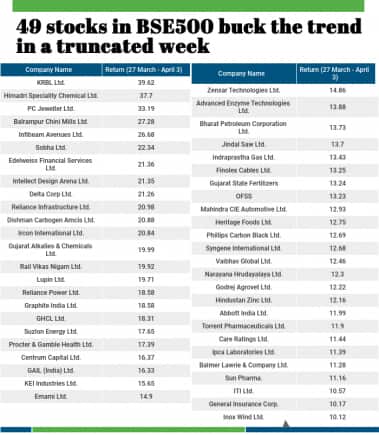 Institutional selling, rise in coronavirus (COVID-19) cases across the world, as well as financial stocks because an extended period of lockdown in India could lead to large non-performing asset (NPA) in the banking as well as non-banking financial companies (NBFC) space.

“In current volatility and stretched margin norms by SEBI, retailers are hardly able to participate. Many investors, mutual funds (MFs) and even many institutions are stuck with their longer-term holding which is bleeding more than 20-25 percent,” Vishal Wagh, Research Head, Bonanza Portfolio told Moneycontrol.

“Many margin calls are getting triggered. The fear factor in this market may lead to a further sell-off and liquidation of portfolio and redemption of MFs. Current lockdown scenario is also forcing many corporates to generate liquid cash for payment of overheads, and wages,” he said.

Volatility is likely to continue for the month of April as well, suggest experts. The coming week is a truncated one which has only three trading sessions. The market will remain shut on Monday (April 6) on account of Mahavir Jayanti, and on April 10 which is a Good Friday.

INDIA VIX cooled off considerably from a 12-year high, which is the only sign of relief. It indicates a possibility of volatility reducing and thereby shrinking the overall range in the market.

“Today, the market is clearly driven by fear and sentiments, and till the time, things with respect to coronavirus pandemic does not subside, the pain is likely to stay in the market,” Sameet Chavan, Chief Analyst-Technical and Derivatives, Angel Broking told Moneycontrol.

“Traders are advised not to create aggressive bets especially leveraged positions in such kind of environment. As far as levels are concerned, 8,000 followed by 7,800 would be seen as immediate supports; whereas on the higher side, if the market has to see some relief, the Nifty needs to surpass 8,300-8,400 convincingly,” he said.