As many as 32 stocks in the S&P BSE 500 index rose 50-100%. These include Info Edge, Titan Company, Vinati Organics, Muthoot Finance, and SpiceJet.

Dussehra, or Vijay Dashmi, marks the victory of good over evil. In equity markets, it is bulls that have beaten the bears convincingly in the last one year, giving investors a good reason to celebrate.

Amid a lot of volatility and fears of a slowdown in the domestic and global economy, investors beat fixed deposit (FD) returns in the last one year.

Investors’ wealth, as per average market capitalisation of BSE-listed companies, rose marginally by just over Rs 4 lakh crore in the last one year.

But at the index level, the Sensex has risen 8 percent, while the Nifty is up by around 7 percent from Dussehra 2018 to Dussehra 2019.

First, the good part: three BSE500 stocks were able to give returns over 100 percent. They are InterGlobe Aviation, CreditAccess Grameen, and Aavas Financiers .

As many as 32 stocks in the BSE 500 index rose 50-100%. Among them are Info Edge, Titan Company, Vinati Organics, Muthoot Finance, SpiceJet, Adani Power, Bajaj Finance, KEI Industries, and HDFC AMC. 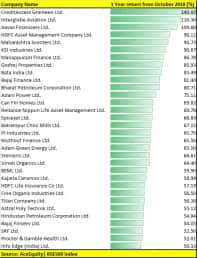 As many as 20 Nifty stocks gave double-digit returns in the last one year, with Bajaj Finance and BPCL rising 80 percent each.

Now for some not-so-good news. More than 50 percent, or 301 stocks, in the BSE 500 space gave negative returns in the last one year. Nearly 40 stocks of these 301 fell 50-90 percent. Among them are Wockhardt, Rain Industries, SAIL, Indiabulls Real Estate, Suzlon, Dish TV, Coffee Day, Reliance Power, and Reliance Communications.

All eyes will be on the September quarter results, which most experts feel are unlikely to deliver a surprise.

But, the measures introduced by the government in September will play out in the long term that should support the economy, which fell to a six-year low in the June quarter.

The government is on a stimulus drive to bring the economy back on the rails. It has undertaken several measures like rollback of FII surcharge, clarified on BS-VI transition, increased liquidity support for HFCs, merger and recapitalisation of PSU banks, has come up with exports-related incentives and above all, has rationalised corporate tax rates.

The repo rate has seen a cut of 110bps since February 2019, with an increased focus on the transmission of benefits to borrowers.

“Slowdown impact is deep and corporate profit growth estimates have not gone up despite tax cuts. In fact, initial euphoria post-tax cuts has died down for most stocks. With more and more number of banks, NBFCs coming under a cloud, pain in the real economy is evident,” Prabhudas Lilladher said in a report.

“We believe that festival season holds key to recovery, with normal monsoons and government stimulus acting as key drivers. The market is still largecap-centric, though a faint pickup in smallcap is evident. MSCI India premium over Asia is at 33% which is at a discount to LTA of 46%,” it said.

Analysts at Prabhudas Lilladher expect the near-term volatility to sustain given fears of rising corporate defaults and their impact spreading to more segments and sectors. “We retain our 12-month Nifty target of 12,488, which values markets at 19xFY21 EPS,” it said.