Index heavyweight Reliance Industries was a major contributor to the market rally as the stock hit a fresh record high of Rs 2,851 and became the most valued listed entity in India with market capitalisation of more than $250 billion.

The Nifty Midcap 100 index gained half a percent and Smallcap 100 index rose 0.3 percent. Market breadth was slightly positive as about 982 shares advanced against 933 declining scrips on the NSE.

The market recouped all its previous day's losses and gained more than one percent on April 28, as all the sectors participated in the rally despite consistent selling by FIIs. However, overall, the market has been rangebound for a couple of weeks.

The Nifty Midcap 100 index gained 0.6 percent and Smallcap 100 index rose 0.4 percent. Market breadth was slightly negative as about 1,014 shares declined against 922 advancing scrips on the NSE.

Here are the five factors that drove the market higher today

Most of its Asian counterparts traded higher with more than one percent gains after the Bank of Japan decided to hold rates steady in its monetary policy, which was largely on expected lines. Investors also closely monitored China's COVID situation and the Russia-Ukraine conflict.

Japan's Nikkei spiked 1.75 percent at the close, while South Korea's Kospi and Australia's ASX 200 gained more than 1 percent each.

European peers also traded higher following the corporate earnings scorecard. Germany's DAX and France's CAC rallied 2 percent each, while Britain's FTSE rose 0.84 percent at the time of writing this article. Investors continued to keep an eye on Russia's next move on its gas supplies to Europe. (as per a CNBC report)

Profitability in Q4FY22 increased by 8.6 percent year-on-year to Rs 2,327 crore with revenue growth of 11 percent to Rs 13,462 crore. The underlying volume growth remained flat against CNBC-TV18 poll estimates of 2-4 percent decline YoY. At the operating level, EBITDA (earnings before interest, tax, depreciation, and amortisation) jumped 9.7 percent, and the margin contracted by 30 bps to 24.1 percent in Q4 as compared to the year-ago period.

The management commentary was cautious but the numbers were on expected lines given the elevated commodity prices and recent palm oil ban by Indonesia.

Index heavyweight Reliance Industries was a major contributor to the market rally as the stock hit a fresh record high of Rs 2,851 and became the most valued listed entity in India with market capitalisation of more than $250 billion. The stock gained 1.5 percent at Rs 2,819.85.

The rally in Reliance comes ahead of March 2022 quarter earnings that are expected to be very strong due to a healthy refining margin. Telecom and retail businesses could also boost quarterly numbers.

"Reliance is expected to report improvement in earnings on account of stronger refining margins, offset partially by weaker petrochemical margins. The telecom segment is expected to benefit from higher average revenue per use (ARPU) realisation and retail segment from sales traction driven by growth in-network," Yes Securities said. 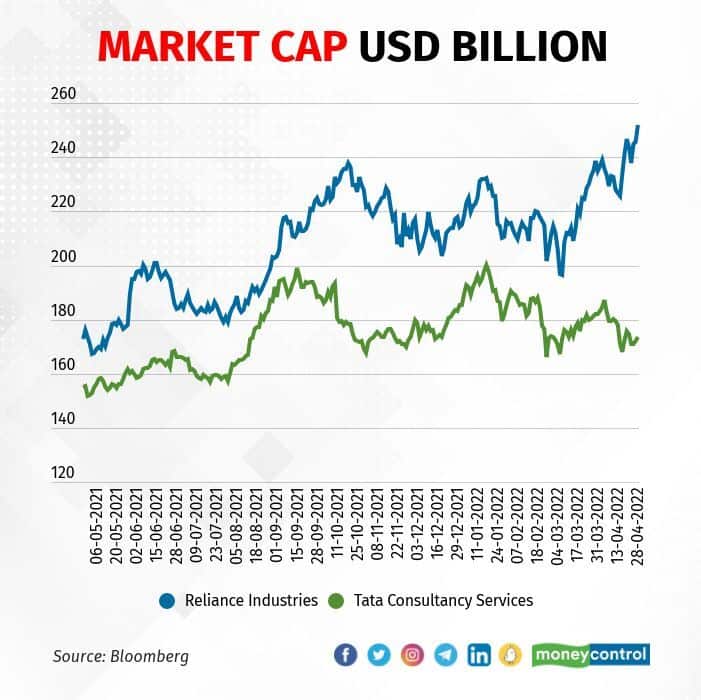 All sectors participated in the rally. The Nifty FMCG index was the biggest gainer with more than 2 percent gains led by HUL.

Nifty Bank, Financial Services, IT, Oil & Gas, and Pharma indices gained around a percent each, while Auto was up 0.3 percent.

The volatility index also cooled down below 20 levels, which also lent support to the market. Experts feel the same needs to fall to around 15-18 levels for stability in the market. India VIX was down more than 5.95 percent to 19.38 levels.