The average market capitalisation of the BSE-listed companies fell from Rs 156.14 lakh crore recorded on June 3 to Rs 148.23 lakh crore witnessed on July 8, which translates into a fall of nearly Rs 8 lakh crore

Sensex wiped out more than 1000 points in the last two sessions, extending its loss from its all-time high recorded in June to over 1,500 points. In the same period, the fall has cost investors more than Rs 8 lakh crore as the market cap of BSE listed companies has crashed.

The average market capitalisation of the BSE-listed companies fell from Rs 156.14 lakh crore recorded on June 3 to Rs 147.96 lakh crore on July 8.

The government proposal to increase taxes for foreign portfolio investors (FPIs) in the Budget 2019 dented sentiments. Additionally, the absence of any fiscal stimulus and proposal of 20 percent tax on share buybacks by companies resulted in a knee-jerk reaction on D-Street.

“The markets are reacting not only due to the reduced limit on promoter holdings but no visible action is stemming due to the current slowdown in the economy. Investors can look at quality stocks, however, don’t expect a V-shaped bounce back, unless there is more clarity on such issues,” Amnish Aggarwal, Head of Research, Prabhudas Lilladher told Moneycontrol. 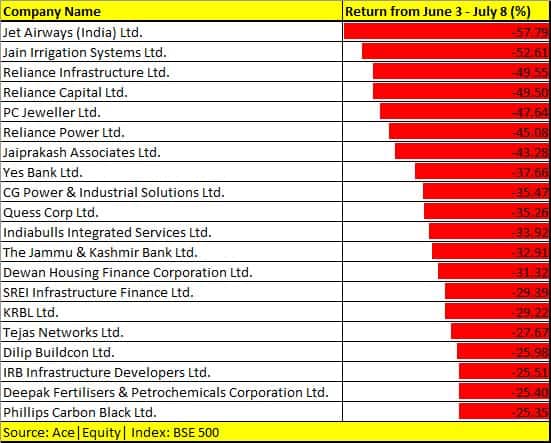 Among Nifty stocks, as many as 12 appear in the list. They include IOC, Tech Mahindra, Indiabulls Housing Finance, BPCL, Hero MotoCorp, GAIL India, Coal India and YES Bank, among others. Higher valuations could also be one big factor that must have weighed on markets as earnings recovery looks bleak in the June quarter result season as well.

“At 20.2x FY20 EPS, the Nifty is trading at rich valuations with no room for re-rating, in our view. However, reducing the cost of capital/10-year yields augurs well for equity valuations,” Motilal Oswal Financial Services said in a report.

“Q1FY20 earnings will kick start this week and we are expecting a slightly subdued quarter with 8/10 percent profit growth for MOSL/Nifty, predominantly led by financials,” said the note.