The benchmark indices outperformed the broader market in the week gone by as the S&P BSE Mid-cap index rose 2.4 percent while the S&P BSE Small-cap index was up 2.1 percent for the week ended March 15.

A blockbuster week for India markets as Sensex and Nifty50 surpassed their crucial resistance levels and closed with hefty gains for the week ended March 15. The S&P BSE Sensex rallied by 1,353 points or 3.69 percent while the Nifty50 rose 3.5 percent in just 5 trading sessions.

The benchmark indices outperformed the broader market in the week gone by as the S&P BSE Mid-cap index rose 2.4 percent while the S&P BSE Small-cap index was up 2.1 percent for the week ended March 15.

Among the top 500 companies, as many as 32 companies in the S&P BSE 500 index witnessed a rally of about 10-20 percent which includes names like DLF, Finolex Cables, IDFC, Jubilant Life Sciences, Adani Transmission, Allcargo Logistics. 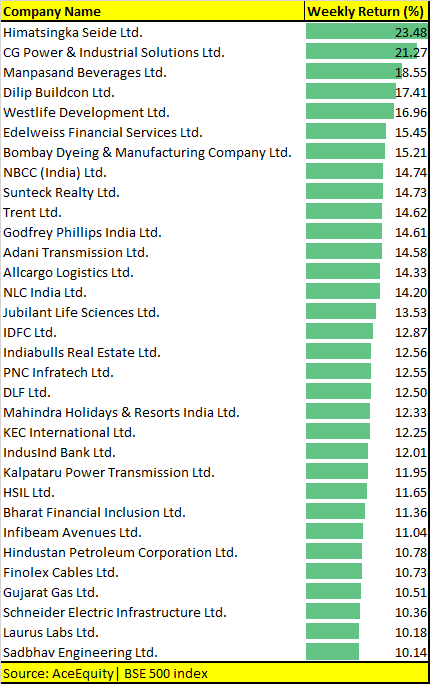 In the S&P BSE Mid-cap index, as many as five stocks rose 10-20 percent which include names like NLC India, Adani Transmission, NBCC India, Edelweiss Financial Services, and IIFL Holdings.

In the S&P BSE Small-cap index, as many as 69 companies rose 10-40 percent in just five days which include names like Indosolar, ABG Shipyard, Orchid Pharma, The Byke Hospitality, Indo Count Industries, and IIFL Holdings.

"Banking pack is leading from the front on the expected lines while others are playing a supportive part on a rotational basis," Jayant Manglik, President - Retail Distribution, Religare Broking told Moneycontrol.

The Nifty50 formed a bull candle which resembles a Shooting Star kind of formation which still needs confirmation. A bearish candle on March 18's sessions would suggest that the momentum is waning.

The Nifty as per weekly timeframe has witnessed a sharp upside breakout of larger range bound movement at 11K mark, with a formation of the long bull weekly candle.

The near-term uptrend of Nifty remains intact, but after a sharp rally, we could see some consolidation. The next immediate resistance level to watch out is 11,500 levels.

"Having moved up sharply recently, there is a possibility of a minor downward correction in the next week, but the expected weakness is unlikely to damage the uptrend status of the market. Immediate resistance to be watched for next week at 11,520 levels," Nagaraj Shetti - Technical Research Analyst, HDFC Securities said in a note.

Bank Nifty hit a fresh lifetime high of 29,520 mark and managed to hold above 29,000 zones towards the close which is a bullish sign.