There are as many as 24 stocks in the S&P BSE 500 index that fell 10-20 percent in the same period which include names like DLF, Oberoi Realty, Axis Bank, Indiabulls Housing Finance etc. among others.

Weak global cues, geopolitical tensions, muted macroeconomic data, loan restructuring weighed on the banking space are some of the factors which led to a near-3 percent drop in benchmark indices for the week ended September 4.

The S&P BSE Sensex fell 2.8 percent while the Nifty50 was down by 2.7 percent for the week ended September 4.

Broader markets fell in-line as the S&P BSE Small-cap index saw a fall of 2.6 percent while the S&P BSE Mid-cap index was down 2.7 percent in the same period.

There are as many as 24 stocks in the S&P BSE 500 index that fell 10-20 percent in the same period which include names like DLF, Oberoi Realty, Axis Bank, Indiabulls Housing Finance, Future Retail, and TCNS Clothing, etc. among others.

It seems like the market is facing headwinds from both local and global cues. The Nifty50 broke below crucial support levels placed at 11600, 11500, and 11400. The next major support for the index is placed at 11,050.

“Besides, muted macroeconomic data viz. PMI data fell for the sixth month in a row and GDP data contracted by 23.9% further dented the sentiment. Amid all, the SC verdict on AGR dues and better than expected auto sales numbers eased some pressure in the middle. However, a sharp sell-off in the global markets again changes the market tone in the final trading session,” he said. 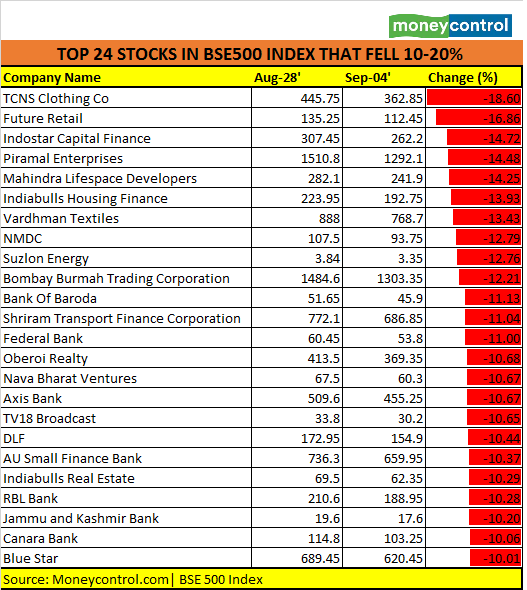 Amongst the sector, barring telecom, which ended with gains of 1.5 percent, all the other sectoral indices witnessed selling pressure where Banks, PSU, and Realty were the top losers and ended significantly lower by 5.4-6.3 percent.

Banking was the worst-performing sector in the week gone by. Experts are of the view that with the moratorium period coming to an end, loan restructuring is something that could weigh on the banking space.

“Loan restructuring will weigh on the banking space over the next one year or so in reminiscence of banks underperformance between 2012-14 weighed heavily by NPAs. However, this could pave the way for consolidation in the sector in favour of strong private names,” Paras Bothra, President of Equity Research, Ashika Stock Broking told Moneycontrol.

The price action for the week resulted in a sizeable bear candle that engulfed last weeks’ gains indicating profit booking after 650 points rally in the preceding six sessions which pushed prices into overbought territory.

The index held on to its 20-Day moving average which is currently placed at 11386 for the fifth occasion since May 2020. For the coming week, 20-DMA, and 11300 will be important levels to watch as a break below this level could lead to some more selling pressure, suggest experts.

“Since the beginning of May lows, Nifty has always attracted elevated buying demand in the vicinity of 20-day EMA. Only a decisive breach of this moving average would signal a change in market rhythm and extended profit booking,” Dharmesh Shah, Head – Technical, ICICI direct told Moneycontrol.

“Going ahead, sustainability above 20 days moving average and last week’s low (11303) on a closing basis would keep pull back options open. The absence of such sustainability would signal extended consolidation in the range of 11100-11600 amid stock-specific action,” he said.

Shah further added that lack of follow-through selling in global equities would be key monitorable for similar price action to pan out on domestic bourses. He expects Nifty to attract buying demand in the vicinity of 11100 levels.

Disclaimer: The views and investment tips expressed by experts on Moneycontrol.com are their own and not those of the website or its management. Moneycontrol.com advises users to check with certified experts before taking any investment decisions.
Tags: #Market Edge #MARKET OUTLOOK #Nifty #Sensex #Weekly data #Weekly Returns
first published: Sep 5, 2020 10:00 am