For India, the current account deficit is within the comfort zone although it has widened and the GDP growth is heading towards 7.5-7.7 percent,

As fears of a global trade war spook economies around the world, steel prices have taken a beating. However, US President said that he will exclude the North American Free Trade Agreement (NAFTA) countries like Canada and Mexico.

Ahya said currently they are working with a scenario where there could be temporary trade disputes arising due to levy of US tariffs. But if there is reciprocal tax imposed as mentioned by the US President, then it would result in a protectionist scenario, which could be worse than the trade dispute scenario.

According to him, the cumulative impact of the US measures so far haven’t been very meaningful.

President Donald Trump had earlier said that the US which has nearly USD 800 billion deficit with other countries is ready for a trade war with them, if they retaliated against his decision to impose 25 per cent import tariff on steel and 10 per cent on aluminum. 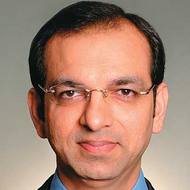 When asked if he expected a big slowdown in China this year, Ahya said China GDP growth could slow by 30 basis points to 6.5 percent this year. However, they are constructive on the ability of China to be able to rebalance the economy, he added.

The house is also constructive on emerging market growth outlook and the impact of Fed rate hike on them.

However, if the US 10-year bonds yields were to go up significantly in short term to the tune of 50 basis points or more, then it would temporarily affect the EM asset markets and growth confidence. But underlying fundamentals of the EMs would take charge, he said.

On India, he said the current account deficit is within the comfort zone although it has widened. The GDP growth for the economy is heading towards 7.5-7.7 percent.

When asked what he made of raised tariffs on number of India products in the recent Budget 2018, he said it is not a good idea to put in tariffs unless there is some major national security issue.

He is also of the view that the Reserve Bank of India will not hike rates as growth is recovering. Moreover, at the current juncture inflation is not a major concern for RBI.

However, they could hike in the second half of 2018.

Latha: We are beginning to see China rebar quoting lower and the impact been seen on Indian metal companies today whether it is Hindalco Industries, Vedanta or whether it is more importantly steel companies there is pressure on them. How do you think this trade war is going to impact and are we going to see actually a trade war? Will there be retaliation?

A: I will address this in two sets of points. The first is how do we see this whether this will transition into something more bad. So we classify this into three scenarios. One is de facto status scenario which is a more benign outcome. Second is temporary trade dispute scenario and third is protectionist push which is basically that there is more actions taken by other trade partners in response to the US and this goes a bit out of control. So currently what we are seeing is that the benign scenario is out of question because the US has levied tariff on steel and aluminium which is bringing us to the second scenario of temporary trade dispute and to watch whether this transition into the third scenario which is protectionist push, we are tracking whether they go ahead with something more serious in form of tariff against China on a full fledge basis, something like 20 percent tariff or a 10 percent tariff across the board on all imports from China under section 301. Similarly we are watching whether they are going to do something on reciprocal tax that is the other thing that the President has mentioned in his tweets that he is considering reciprocal tax then it would evolve into this protectionist push scenario which is definitely worse than the temporary trade dispute scenario.

Latha: If you are working with temporary trade scenario, your second scenario as your base case then what do you expect. Will there be pressure on prices or will there be a reduction in trade and therefore will you have to rework even growth figures?

A: Not really because if you think of the way the numbers are positioned right now, the products which have been taken under tariff review are about 4 percent of US total imports and they are also very small if you take up steel, aluminium they are relatively small as a proportion of global trade for those respective products and it is about 0.5 percent of US GDP. So it is not meaningful enough, the cumulative impact of all the measures that they have taken so far. So the more important question is what happens next and that is where we are watching the effort or the announcement on section 301 and also the reciprocal taxation comment that the administration had given.

Sonia: I also wanted to ask you about China. Are you forecasting a big slowdown in China this year and what are your thoughts on rebalancing that the Chinese economy has spoken about in terms of reducing their investments etc? Will that benefit the rest of the world?

A: We think so. If you have seen, we have put out a big report on China in early last year on our confidence that they will be able to rebalance the economy and transition to high income status. So with that picture in mind we are constructive on the way they will be able to rebalance the economy and in terms of growth numbers we have, we are expecting GDP growth to slow a bit this year by 30 bps to 6.5 percent which is not going to be a big concern for the rest of the region in terms of its impact on deceleration in growth rate.

A: Not really, we are quite constructive on EM growth outlook and the impact of the Fed rate hike on EMs. The way we approach this is – look at two sets of numbers. First is what is a real rate differential between emerging markets and the US. Second is, what is the state of their macro stability indicators, for example what happened during taper tantrum is India which is one of the worst affected during taper tantrum was running a current account deficit of 6 percent; 10 percent inflation and 200 bps negative real rate differential versus Fed whereas the whole situation has changed for emerging market as a group and India now where they are having adequate real rate buffers, current account balance is up back to 2009 levels and inflation is also very much in control. So we think they will be able to absorb these Fed rate hikes. Having said that what happens is if US 10-year bond yield were to go up in a meaningful manner in the short period of the magnitude of 50 bps or more. It does affect EM asset markets and EM growth confidence for a temporary period but underlying fundamentals will eventually take charge which we think are in a good shape. So we kind of maintain our constructive view on EM growth outlook.

Latha: Coming to India. You referred to all those buffers; higher real interest rates, lower fiscal deficit, lower current account but the current account deficit has again started to rear its head up. The January numbers were USD 17 billion or at least USD 16.5 billion in terms of monthly trade deficit tally. You see any danger there?

A: So far the current account deficit yes, has widen but it is still well within the comfort zone. I think the magic number for India is 2.5 percent that is what RBI has highlighted. So as long as we do on a 12 month trailing basis, quarterly numbers can be vitiated by seasonality and sometimes what happens to the country like when we were implementing goods and services tax (GST) there was some kind of supply problem for exports and so it got hit. So if underlying trend is reflecting to the magnitude of 2.5 percent of GDP or above then we should be concerned but at this point of time we do not think we have reached that stage where it is a concern.

Latha: We speak about everyone’s protectionism. What about ours. The current Budget also raised tariffs on a number of Indian products. Your comment on that as well growth forecast for FY19?

I was reading a media comment from the UK Prime Minister and she said that Britain had tried this in the 1960s and 70s and all what happened is Britain lost out in its market share of exports for some of the goods because they actually lost competitiveness with the effort on protectionism and tariff.

Sonia: So in terms of growth what are you forecasting? Just to come back to Latha’s next question and what are we looking at from the RBI now? There is one thought in the market that we are inching towards a rate hike but would you concur with that view?

A: For India we think growth continues to pick up. We think we are heading towards 7.5-7.7 range going forward. For RBI’s action at this point of time we think RBI does not have the confidence to take up rate hike because growth has just taken hold in terms of recovery particularly the most important growth component that RBI should be watching is capex cycle and that has yet not even shown full recovery. We think it would be a bit premature for RBI to take up rate hikes right now but they have to keep track on inflation. Our view is that inflation is in control. Core inflation is the new terminology now we are using for core inflation because we have to take out the housing component to understand what is happening underlying and that is running at around 4.3 percent. So we think that at this point of time inflation is not a concern for RBI to jump in with a rate hike but we expect them to take it up in the second half of the calendar year.
CNBC-TV18
Tags: #Current Afairs #FII View #trade war #US President Donal Trump
first published: Mar 9, 2018 12:14 pm