172@29@17@248!~!172@29@0@53!~!|news|business|markets|see-fresh-highs-before-budget-like-maruti-kotak-inst-1394687.html!~!news|moneycontrol|com!~!|controller|infinite_scroll_article.php!~!is_mobile=false
Watch experts decode 'The rise of ESG investing' on October 29 at 4pm. Register Now!
you are here: HomeNewsBusinessMarkets

Given that Indian equities are in a sweet spot, market should hold steady at current levels, says Sandeep Bhatia, Executive Director and Head of Sales at Kotak Institutional Equities.

Going ahead, market may witness fresh highs before the Budget, he says in an interview to CNBC-TV18.

According to him, autos space will be one of the biggest beneficiaries of the GST rollout. Although real benefits of GST will come after 2 years, it will mainly influence simplification of taxation, he adds.

Even though legislative changes will be fast if NDA gets majority in Rajya Sabha, Bhatia is confident of receiving positive news on electoral front. 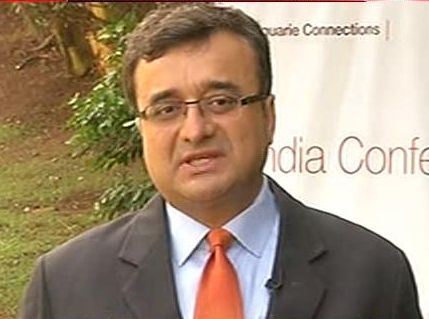 Ahead of the Budget, he advises investors to buy interest rate sensitive and consumer durable stocks. Onto specifics, he is upbeat on Max India and Maruti.

Q: What is the immediate shorter term call, do you think the correction we saw in both the global markets and the Indian markets is over for now, it was just a routine end of year profit taking?

A: I would think so. I don’t think that I would expect any major fall in the markets in the next two weeks; that should not be the case. As Uday has been saying for the last couple of weeks that God is an Indian so a lot of things which have happened for India have been very positive in the global macro economic scenario. So, we have seen major corrections in oil prices, even if the Reserve Bank of India has not cut rates we have seen our 10-year bond yields come off.

The broader economic pickup is still to happen but that as I have been saying for sometime is six months away. So, on the whole I think India is in a much better spot as end of 2014 then most of the world; we can look around ourselves and we will see that fact. So, I would think market should hold steady here.

Q: The biggest positive for the next say couple of weeks or months could be the rollout of GST at least that is the indication you get from various experts that you speak to. In your mind how does one play that, what are the sectors or stocks that could benefit from GST?

A: There are a lot of issues on GST which need to be known before we make any broad or specific statements in terms of sectors. First, we still have to see what is the timeline of this, it will probably be April 16 is the assumption. However, if that happens the first one year is just ironing out the differences. Maybe we will start at a higher tax rate because there is a risk and there is an outlook that the state governments need to be compensated. So, I don’t think there will be a significant decline in taxes paid by businesses at all, it only will first simply matters, it will allow the movement of goods to take place. The real impact of GST in the first one year would be to give simplicity to the entire taxation process and make the movement of goods better across the economy.

Only when we see state governments getting more assured that there is no big decline especially even Octroi is supposed to be clubbed in, so, if we see that also the local bodies, municipal bodies also get their share of taxes, only then will tax rate start falling that will probably be after the second year. So, the first couple of years is just simplification and I would think therefore the entire economy benefits.

If at all there is any sector that benefits potentially it is the car sector because higher end cars probably have taxes which are in excess of 45 percent. In the GST regime, they will be in the region of 24-27 percent. So, there are some benefits in top end cars but broadly it is a macro economic benefit and the real benefit will flow in after two years if tax rates fall.

Q: Is there a general rerating possible now? Oil has been and the impact of that on India has kind of been factored in, we have been seeing our markets move positively except until the recent correction, what about positives like actually the GST Amendment Bill has gotten passed perhaps the Insurance Bill as well before the winter session wraps up, we are ahead of a Budget where a lot is expected. Is there a possible fresh record high that we can set pre-Budget?

A: Any kind of rerating always is temporary unless it is accompanied by fundamental improvement in earnings prospects of the corporate sector. So, in the short-term you will see good outcomes on elections, you will see the Jharkhand as per exit polls BJP being the majority party, even in Jammu and Kashmir, they would have the best performance, in Delhi the opinion polls which are coming through are saying that they seem to be in the lead. So, the clearly the electoral cycle will continue to give good news.

Does the economic cycle follow? One would expect that to happen in the second half but fresh highs can happen around the Budget, most likely it will happen before the Budget and after the Budget because market always runs ahead of itself and continues to build expectations to an extent at which finally not all these expectations eventually comes through immediately. So, clearly there could be fresh highs before the Budget and after the Budget we all would be discussing that it was good but not as good as what we wanted. So, anyway this is just a cycle of building expectations that the market always does.

The real issue still is that we need to see bigger momentum pickup and one thing which is now coming through in what we have been reading in the newspapers for the last one weeks is that now the government realises that actually the government itself will need to start raising its spending for the capex and investment cycle to pickup. I think this is something which in banks a lot of people know that it is not that a lot of big corporates have the balance sheets now to take even more leverage and to start building even more capacity. So, in fact capacity utilisation in the economy is very low and in fact fresh capacities if at all will get added from the corporate sector after three to five years so actually the government needs to now start spending.

Q: As we head into the Budget, apart from government spending what are the other one or two crucial factors that you would watch out for that would be make or break for the Budget this time?

A: I would say again that the markets have a tendency to put everything in the Budget. We should not do that. In the Budget, what one needs to see is a clear roadmap of how the entire economic cycle whether coming from government side or whether coming from further liberalisation in foreign direct investment can kick-start the investment cycle. I think that is the only thing I would fundamentally expect from the Budget.

Other than that, it is all in the realm of legislative changes and once we see the upper house, Rajya Sabha also reflects the majority of the NDA then legislative changes would be much faster. That would be a two year time. So in the Budget it is more about the capex cycle picking up and allowing greater investments coming through both from government side and the foreigners.

Q: One, can the government monkey around with the deficit or will the foreign investor opinion be fairly serious about even the qualitative aspects of how the deficit number is arrived at and two, off and on we get this disturbing news about the RBI Governor and the BRICS bank idea. How would the financial markets react, the finance ministry and the government sources scotched it completely but if this bogie were to win again how would the financial markets take it?

A: I think the markets like the work that RBI has done and also the way the Governor is a steady hand. So, clearly if there is any midway leadership change there could be jitters in the market. I think that is not on the cards so that is a great thing. I also think that to say that the government will give the fiscal deficit numbers a go by would be actually too aggressive way of putting it.

We have seen a big compression of spending. As far as the government is concerned in GST, tax rates will most likely go up in the near term as I have tried to hint in the beginning of this conversation. So, in terms of taxes government would be very well placed if the cycle picks up, from June onwards that will also show up in tax collections. So, it is important that the government identifies couple of key projects and targets investments in those areas which can basically kick start the investment cycle rather than broad brush spending or maybe salary increases or that kind of consumption spending which the government can do.

Q: What about the stocks and the sectors itself, now that the global fears are out of the way at least for now what are the stocks or sectors that you would advise accumulating ahead of the Budget?

One other stock that one can look at is Max India. That is a business which has significant potential; we have seen interest build up in the insurance sector so Max India is something which we initiated on just two weeks ago. We see good potential for the insurance business of Max India. It is a high quality play and that is one name in the financial sector that one can look at.

If you step outside of the NBFCs and the banks then I would look at Maruti. This is both an interest rate sensitive and also a very well entrenched player in the car business. We expect new models to come through on 2015; market share should remain steady if not inch up. The fact that Japanese yen has corrected, it would give a big fillip to margins as far as Maruti is concerned. So, we like that stock.