See equity rally extend in 2018 but ride could be bumpy: JP Morgan

Mixo Das of JPMorgan in an interview to CNBC-TV18 talks about the fine print of their Asia strategy and their call on India.

He said in their country allocation model, they still have a small underweight on India, which has been there for the last few months but some of the drivers are starting to look better for India. GDP growth is improving and  there is some broad based recovery in earnings, which will help improve the outlook on India in next few months.

He said for them to change their stance on India, the focus would be entirely on earnings. India in the last five years saw a consistent downgrades in earnings and once those show an improvement, they would look at the outlook again.

Investors, he said are still generally positive on the long-term India story. 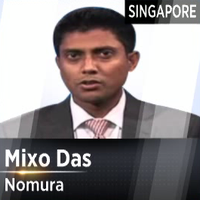 When asked what they were advising their clients to do -- continue investing into consumers or sectors that have done well or look at industrials or sectors that have not done well so far on back of capex recovery, he said it would be more towards the later, where across the region they are looking for rotation of growth and out performance.

He said, this is in line with what they see globally in terms of economic growth, where there seems to be rotation or broadening out from what used to be narrow drivers focused on trade, on technology and commodities and into more domestic demand-driven, more capex driven or credit growth driven recovery. That will be the theme in terms of sector and stock recommendations, he said.

When asked if sees the equity rally seen in 2017 extending to 2018, he said yes but there are several risks on the way and could be a bumpier road than seen in 2017.