Sectoral report card FY22: The leaders and the laggards

Power, metals, utilities, telecom and IT indexes outperformed the benchmarks, while FMCG, banks, finance and auto lagged behind.

The financial year 2021-22 has been full of ups and downs, higher highs and lower lows, giving investors a taste of both the bull run as well as bearishness, accompanied by extreme volatility.

The liberal monetary policy, low interest rates and unprecedented retail participation flooded the markets with liquidity, which resulted in the strong bull run getting extended to more than 18 months.

The benchmark Indian stock indices hit their historical highs on October 19, 2021 – that’s when the markets changed direction and started declining. The hawkish stance of the US Federal Reserve on impending interest rate hikes, rising US Treasury yields, the increase in crude oil prices as economies opened up and demand climbed, and the impact of the Omicron variant of the Covid-19 virus were some of the factors that made wary investors start booking profit.

Just when things seemed to settle down and the markets tried to price in higher US interest rates, the flare up between Russia and Ukraine spoiled sentiment. When Russia invaded Ukraine on February 24, the markets witnessed their biggest intra-day decline in 2022. Billions of dollars of investor wealth across global markets were washed away in a single day.

The Ukraine conflict brought challenges in terms of rising energy prices, which led crude oil to scale a 14-year high, metal and commodity prices going through the roof, and a surge in food prices, given that Russia and Ukraine are among the biggest suppliers of wheat, corn, edible oils and barley. These factors skewed returns, benefitting sectors that were favourably impacted by the war.

A look at some sectors that generated substantial returns during FY22 while others lagged behind. 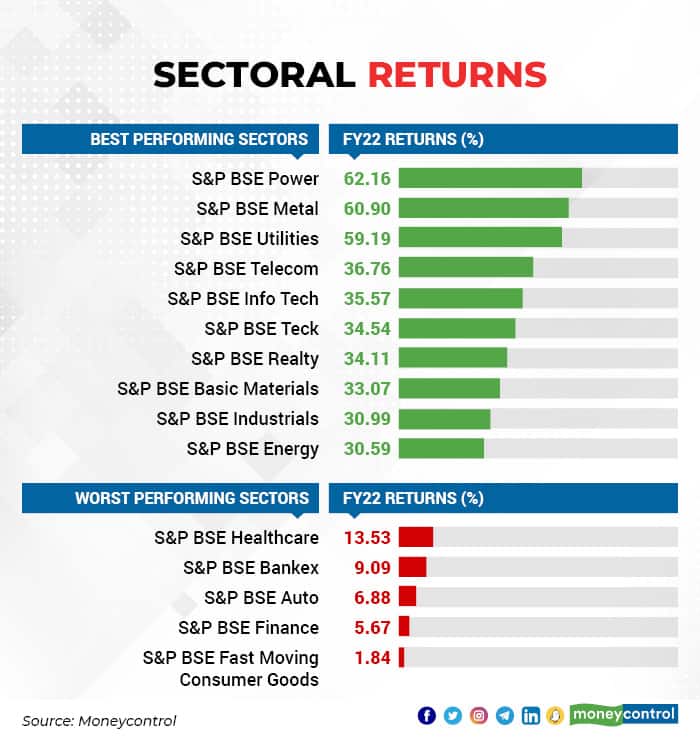 BSE Power was the top sector, generating the highest returns of ~62 percent during the current financial year. Incremental demand and anticipated favourable regulations were the reasons for the sector’s outperformance.

“Reforms such as the Revamped Distribution Sector Scheme and the Electricity Amendment Bill seem to be revolutionary,” said Sonam Srivastava, founder of Wright Research.

The measures aim to de-license electricity distribution and lower entry barriers for private businesses, allowing consumers to select from a variety of providers.

“The huge growth opportunity due to the green energy push and the attractive valuations proved to be catalysts, leading to the stellar outperformance of this sector,” said Yesha Shah, head of equity research at Samco Securities.

The BSE Metals index gained ~61 percent during FY22, aided by the rise in commodity prices, first due to supply disruptions caused by the pandemic and more recently due to the conflict in Eastern Europe.

“Metal prices are at a multi-decade high due to supply constraints from China and high demand post-unlocking of economies across the globe and the sanctions from the US on Russia have further disturbed the supply chain, leading to high prices of metals,” said Sudeep Shah, head of technical and derivatives research at SBI Securities.

Also, regained traction in capital investments led to a price upsurge in many commodity prices, which resulted in metal stocks witnessing a multi-year breakout, Shah added.

BSE Utilities was third with returns of over 60 percent, riding on investor preference for safe options amid increased volatility.

“Utility stocks can generate consistent dividends, making them a safe income-generating option for investors. Thus, given the volatility, the utilities sector was bound to rise,” said Srivastava.

BSE Telecom appreciated ~37 percent during the financial year as the sector’s performance improved with increased data usage and tariff increases. There was huge demand for data as more people worked from home.

“Improvement in ARPU (average revenue per user) in the past year aided the financial health of telecom companies,” said Shah of SBI Securities.

Consolidation in the sector led to an oligopolistic market with three private operators, unlike a few years ago, and this benefited the telecom companies.

The BSE IT Index, which gained 35 percent, outperformed the benchmark indices by around 20 percent in the past year.

“Indian IT companies reported their best quarterly revenue growth in the past few quarters after several years, margins remained resilient despite supply-side challenges, and discretionary spending on technology continues to rise across industries,” added Sanjeev Hota, Head of Research, Sharekhan by BNP Paribas.

The strong revenue growth momentum is expected to continue in FY23 and FY24, led by higher spending on digital and cloud initiatives by enterprises.

Other sectors that generated 30-35 percent returns during the current financial year included BSE Teck, which was up 35 percent on the back of sturdy growth of both IT and Telecom companies.

BSE Realty (+34 percent) outperformed the broader markets. The real estate market saw a 91 percent rise in sales from a year earlier and a doubling of launches during the first nine months of FY22, according to Anarock Property Consultants. Unsold inventory reduced by 41 percent by the end of calendar year 2021.

However, Shah of Samco Securities cautioned that “considering the spikes in construction costs, price hikes across real estate companies are likely. This may, to some extent, lead to a moderation in demand.”

BSE Bankex, BSE Auto, BSE Finance and BSE FMCG were the laggards of the year, generating single-digit returns (2 to 9 percent) for investors.

“The banking & finance sector has done well in terms of results. However, it’s been a casualty of relentless foreign institutional investor selling,” said Vishad Turakhia, director-securities at Equirus.

“When we look at those 12 months since 2017 where FII outflows have been the highest, the Bank Nifty underperformed the benchmark index two-thirds of the time, implying a high correlation between the selloff by FIIs and the Bank Nifty’s underperformance,” said Shah of Samco Securities.

The Indian auto sector is under immense pressure due to the shortage of semiconductor chips, while numerous price increases induced by higher commodity prices have dampened sentiment.

“Factors such as Covid-led uncertainties, slowdown in rural demand (especially in the second half of FY22) and sustained high input cost inflation affected the earnings growth of FMCG companies,” said Hota.

The other reason for the sector’s underperformance, as pointed out by Shah, is the fact that FMCG tends to underperform during periods of high economic growth, when other deeply cyclical sectors re-rate.