After a slew of relaxations announced on March 19 for listed companies, the market regulator on March 26 gave further relaxation from compliance with certain provisions of the Listing Obligations and Disclosure Requirements (LODR).

The markets regulator Securities and Exchange Board of India said, for FY19-20, the top 100 companies by market capitalisation are allowed to hold their annual general meetings (AGM) in September 2020 instead of August earlier, an extension of one month.

Generally, a company has to hold its AGM within a period of five months from the date of closing of the financial year.

As per the Regulations 19(3A), 20(3A) and 21(3A), the nomination and remuneration committee, stakeholders relationship committee, and risk management committee of a company, respectively, have to meet at least once in a year separately.

The due date for the above meetings is March 31, 2020, but now SEBI said these meetings can be held by the end of June 30, 2020, giving an extension of three months.

On a regular basis, companies have to get a certificate from a Practicing Company Secretary on the timely issue of share certificates twice in a year i.e. by October-end and April-end. Now SEBI has extended the same by one month to May 31, 2020, from April 30, 2020 earlier. 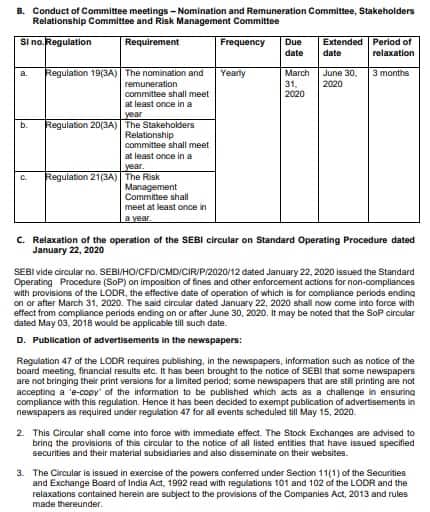 The regulator, in its circular dated January 22 this year, had issued the Standard Operating Procedure (SoP) on the imposition of fines and other enforcement actions for non-compliances with provisions of the LODR.

SEBI has also decided to exempt publication of advertisements in newspapers for all events scheduled (including information such as notice of the board meeting, financial results etc.) till May 15, 2020.

This circular will come into force with immediate effect, said the regulator.

SEBI has been providing relaxation in several regulatory norms due to nationwide lockdown announced by the government to control the spread of novel coronavirus. The lockdown has forced all companies to shut their offices and plants for a period of 21 days.
Moneycontrol News
Tags: #Market news
first published: Mar 26, 2020 04:41 pm