Flat moving averages curve and RSI in sideways zone is indicating that trading range is likely to maintain in the coming trading sessions.

As expected, the pull back has been extended in USD/INR and limited upside till resistance level was witnessed. Bulls have shown mild strength and the currency pair closed with nominal gain of 10 paisa approximately last week.

Taking the current scenario into consideration, the currency pair is trading near important resistance level and we could go through mild correction in the coming days. The 61.8 percent retracement level of the latest swing move is placed at 71.60 per US dollar which will provide direction to the currency pair in an upcoming week. Previous week, the resistance level was breached on an upside but failed to close above it and now any fall from current level could result in mild correction till 71.20.

The short-term base is still intact at 71.10, where major medium-term moving averages are placed. On the contrary, any close above 71.60 could strengthen the bulls further till 71.85 but looking at the current scenario it’s prudent to go for contra trade instead of trading the breakout.

The broader range for the week is expected to be 71.10 to 71.85 and contra trade can be initiated in the currency pair on either side of the range. Flat moving averages curve and RSI in sideways zone is indicating that trading range is likely to maintain in the coming trading sessions.

Market is offering two shorting opportunities at present. Firstly, short positions can be initiated at current levels in anticipation that 71.60 will not be taken out and mild fall can be expected. Secondly, shorts can be entered in the range of 71.75 and 71.80 with the closing basis stop loss of 71.85. On the other hand, buying in the currency pair can only be considered on corrections, until the support level of 71.1 holds. 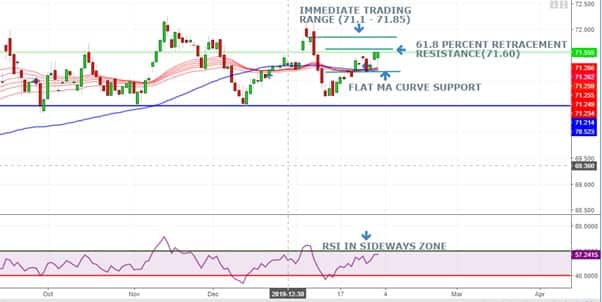 Looking at the overall scenario where the currency pair seems to be locked in the specific trading range and slightly negative bias is expected, traders can go short in futures at 71.56 and simultaneously 2 lots of 71 strike price put option can be sold at 0.0675. Strategy would provide decent risk reward to capture the expected correction.

Note - Options premium mentioned is based on closing price of 7th Feb contract as on January 31.