172@29@17@101!~!172@29@0@53!~!|news|business|markets|rise-in-crude-price-could-push-inflation-higher-defer-rbi-rate-cut-4786551.html?utm_source=MC_OpeninApp!~!news|moneycontrol|com!~!|controller|infinite_scroll_article.php!~!is_mobile=false
Subscribe to PRO at just Rs.33 per month. Use code SUPERPRO
you are here: HomeNewsBusinessMarkets

The trend continued to remain on the upside and we continue to maintain our bullish stance. One should use this correctives action as a buying opportunity for the upside target of 12,400-12,450 in the near term

In the wake of hardening domestic inflation, a rise in crude oil price will push it further, thus deferring the rate cut by RBI in CY2020, which market was factoring in, Rajesh Palviya, Head Technical & Derivative Research at Axis Securities, said in an interview with Moneycontrol’s Kshitij Anand.

The market is likely to remain volatile going ahead due to the risk of possible retaliation from Iran. Crude oil is likely to be on the boil. It is bad news for large oil-importing countries, especially India, which run large trade and current account deficits.

However, on the positive side, the market would be looking ahead for the signing of the US-China trade deal along with the quarterly results and developments before the Union Budget. 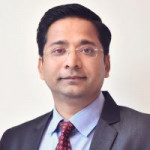 Overall, the trend continued to remain on the upside and we continue to maintain our bullish stance. One should use this corrective action as a buying opportunity for the upside target of 12,400-12,450 in the near term.

We expect mid and smallcaps to outperform going ahead and IT, pharma as well as the metal sector to outperform.

What are the important levels which one should watch out for in the coming week?

On the weekly chart, the index has formed a small bearish candle forming higher high-low compared to the previous week indicating positive bias.

The index is consolidating in the range of 12300 on the upside, and 12,130 on the downside indicating short-term sideways movement. Hence, any breakout on either side will indicate further direction.

The chart pattern suggests that if Nifty crosses and sustains above 12,300 levels it would witness buying which would lead the index towards 12,360-12,450 levels.

The Nifty50 is trading above 20, 50 and 100-Day SMA's that are important short-term moving average, indicating positive bias in the short to medium term.

The Nifty50 continues to remain in an uptrend in the medium term, so buying on dips continues to be our preferred strategy. For the week, we expect Nifty to trade in the range of 12,300-12,000 with mixed bias.

The weekly strength indicator RSI and momentum oscillator Stochastic have both turned positive and are above their respective reference lines indicating positive bias.

Crude prices jumped in the last trading session. Which are the stocks that are likely to benefit or impact the most from the rise?

Other sectors that use crude oil as a raw material would have a negative impact of this surge in crude prices namely automobiles, OMCs, paints, Plastics and packaging material.

Any important event which one should watch out for in the coming week?

Escalation of geopolitical tension between the US and Iran would have a lasting impact on the market. In the wake of hardening domestic inflation, the rise in crude oil price will push it further thus deferring the rate cut by the Reserve Bank of India (RBI) in CY2020 which market was factoring in.

Earnings season would drive the market in the near term starting with IT bellwethers.

What are your expectations from the Budget 2020 from an investor point of view?

So far the government has taken some good measures to address the supply side concerns like corporate tax cut, capital infusion in PSBs, allocation of fund towards affordable housing, etc. and to address the demand side concern market is expecting rationalisation of personal income tax which would put more money in hands of consumers, thus urging them to spend .

This would drive the consumption of discretionary items which is reflected in stock price movement in consumer durable goods.

Investors are also keen on the reversal of long term capital gains (LTCG) tax which was imposed in the 2018 budget which may boost the investor sentiments.

To invigorate the housing sector, some additional benefits for the home buyers would be more than welcome.