Rahul Sharma, Head, Technical and Derivatives Research, JM Financial Services, says the small and mid-cap stocks are driving the market rally.Higher risk appetite among retail investors and high net worth individuals’ participants along with ample liquidity from the domestic funds has been powering the segment, which is not even halfway done.

In an interview to Moneycontrol’s Kshitij Anand, Sharma says a look at the long-term ratio charts of small and midcap indices and the Nifty shows there is still a long way to go. Edited excerpts:

It was a historic week for Indian markets as the Nifty surpassed the crucial 15,700 level intraday. What led to the price action?

Markets have moved from resilience to exuberance in the last three-four weeks. Heavyweights coming to the Nifty party was the reason enough for the index to propel to new all-time highs above the 15,700-mark. 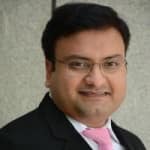 Reliance Industries led from the front extending its rally and breaching the 2,200-mark, while financials, too, played their part led by Bajaj Twins—Bajaj Finance & Bajaj Finserv—and heavyweight HDFC coming into the grip of the Bulls.

On the derivatives front, we saw a good amount of longs being rolled over to the June series, which helped the market rally through the previous week with base shifting higher and higher in Put writers.

After hitting a record high of 15,733 on June 4, the Nifty saw profit-booking after the RBI policy announcement. Have we hit a top? Are there any signs on the chart?

Globally, there were a few concerns with the US markets slowing down but Friday’s strong close has soothed the nerves of the bulls.

Asia continues to remain neutral to positive and this should bode well for Indian markets. While overall activity in the domestic market has slowed down in the last three-four trading sessions, and the Nifty has hit the 15,700 mark, there are no real bearish indications on the daily and weekly charts.

Sector rotation has helped the Nifty stay higher and make newer highs in the last two weeks. Options concentration now stands at 15,500 Puts and 15,700 Calls and suggest we may see some more consolidation before breaking out higher.

Sectorally, BSE realty and consumer durable rallied over 6 percent till June 3. What led to the price action?

The realty index saw a golden cross over around three weeks back and we have witnessed good bullish action in realty stocks since then. The best part was that this rally was fuelled by strong volumes and derivatives data along with broad-based action seen in the sector.

On the consumer durables front, Titan and Voltas were the performing stocks of the week. Both stocks rallied on massive volumes. The re-opening theme along with the pent-up demand and the low-interest rate environment helped realty and consumer durable stocks come out of around 10 weeks of underperformance.

Which are the important levels to track this week on the Nifty?

The Nifty continues to remain bullish above 15,470, while the options data is suggesting 15,700 as the pain point for Call writers.

We expect more upside if this level is crossed and we may see the Nifty testing the next resistance area of 15,900-16,000.

Dips, if any, can be utilised as buying opportunities with intermediate support placed at 15,595.

Small & midcaps have outperformed. What is fuelling the rally in the broader market space?

Smallcaps and midcaps have been doing well despite the underperformance seen in the Nifty50 over the last two months. This ensured that market breadth remained strong even though the index fell all the way down to 14,150 level.

If you see the long-term ratio charts of small and midcap indices with the Nifty, we still have a long way to go. The current rally is still halfway done as we are playing catch-up with the Nifty.

Higher risk appetite amongst retail/HNI participants along with ample liquidity from the domestic funds have ensured that this segment of the market is also doing well.

Top three-five trading strategies for the next three-four weeks?

From the auto space, Tata Motors looks promising for targets of 380 and 400 this month. One can look to add the Nifty long futures near the above-mentioned support levels for a positional target of 15,900-16,000 and stop-loss placed at 15,400 on a closing basis.