172@29@17@240!~!172@29@0@53!~!|news|business|markets|retail-hnis-corporates-raise-stake-in-yes-bank-in-q2-mfs-foreign-investors-reduce-5961551.html!~!news|moneycontrol|com!~!|controller|infinite_scroll_article.php!~!is_mobile=false
Watch experts decode 'The rise of ESG investing' on October 29 at 4pm. Register Now!
you are here: HomeNewsBusinessMarkets

Retail investors, HNIs and corporates increased their stake in Yes Bank during the September quarter, according to the shareholding pattern released on October 13, 2020.

Meanwhile, mutual funds and foreign portfolio investors reduced their shareholding during the quarter.

Mutual funds reduced their stake in the bank to 0.37 percent at the end of September quarter, from 1.70 percent in July. Alternate investment funds cut their stake to 0.71 percent from 0.96 percent in the same period.

FPIs lowered shareholding in the bank to 11.16 percent from 13.72 percent.

Elara India Opportunities Fund and BNP Paribas Arbitrage - ODI seem to have exited the company by selling 1.24 percent and 1 percent stake in the bank. 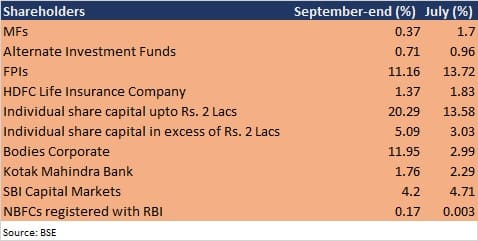 Generally, the shareholding pattern published on the exchanges disclose names of all shareholders holding more than 1 percent of total number of shares.

FPIs reduced their stake by 2.56 percent at the end of September quarter, while Elara and BNP's total shareholding stood at 2.24 percent. That means other FPIs also cut their stake and their names were not available due to the above minimum 1 percent shareholding rule.

SBI Capital Markets was the underwriter in Yes Bank FPO which was subscribed 95 percent in July. Its name appeared in the shareholding pattern only after Yes Bank FPO.

However, retail investors (which comes under the category of "individual having share capital upto Rs 2 lakh") increased stake in the bank significantly to 20.29 percent at the end of September, from 13.58 percent in July and high networth individuals (category - "Individual share capital in excess of Rs 2 lakh") raised to 5.09 percent from 3.03 percent.

Among others who retained their shareholding, Bay Tree India Holdings and Amansa Holdings, which had acquired 7.48 percent and 1.24 percent stake via anchor portion of FPO on July 14, retained their stake at the end of September.

The Reserve Bank of India had restructured the bank and its shareholding in April after the fraud by founder Rana Kapoor who had once proudly described Yes Bank shares as "diamonds" that are forever.