Realty, telecom among 6 sectors that gave double-digit returns in Q3; IT lags behind

BSE Telecom and Realty gained the most, rising more than 15% each, followed by metal index, which rose nearly 15 percent.

After the government cut corporate tax rate in 2019 to boost the slowing economy, the Street has started to build in expectations of more such measures in the Budget 2020.

Nifty rallied 6 percent during the December quarter after gaining 7 percent in last two weeks of September (when the corporate tax cut was announced). The up move is appreciated given the bearish trend in global market given the US-Iran tensions and US-China trade deal.

Six sectors that drove the overall rally in the market in the third quarter gave double-digit returns.

BSE Telecom and BSE Realty gained the most, up more than 15 percent each, followed by metal index (amid easing US-China trade deal worries) which rose nearly 15 percent.

The rally in telecom stocks was largely after tariff hikes and two-year moratorium on spectrum payments, while the boost to housing sector by several measures lifted realty sector sentiment.

Bank and Finance were two other sectors that gained more than 11 percent during the quarter on hopes of strong growth in earnings after easing of NPA concerns and low base. Auto index also gained 10 percent. 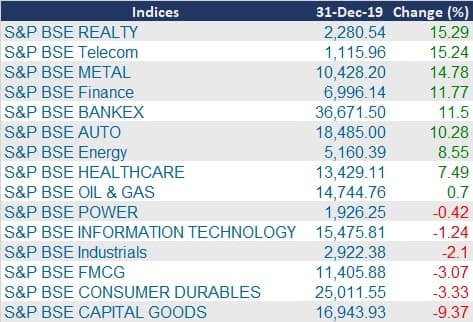 Energy index gained 8.5 percent and Healthcare was up 7.5 percent.

Technology index was down largely due to Infosys, which fell over 9 percent during the quarter due to whistleblower complaint.

For the quarter ended December 2019, most brokerages feel earnings (ex-BFSI) could be tepid or muted, but with the help of banking and financials sector, results season is likely to be better.

Analysts expect double-digit earnings growth in FY21, driven by financials on easing NPA crisis. As a result, the rally may broaden in coming quarters, they feel.