Rakesh Jhunjhunwala, also known as the Big Bull of D-Street, has raised stake in as many as five companies and made fresh investments in two, data collated from AceEquity, as of April 25, showed.

Jhunjhunwala is widely followed by retail investors in India and is known for his Midas touch while picking multibaggers.

The Nifty50 is up over 4 per cent so far in 2021, but 3 out of 5 companies in which Jhunjhunwala raised stake have fallen down by up to 15 per cent in the same period, which suggests value buying on dips.

Note: The table is for reference only and not buy or sell ideas 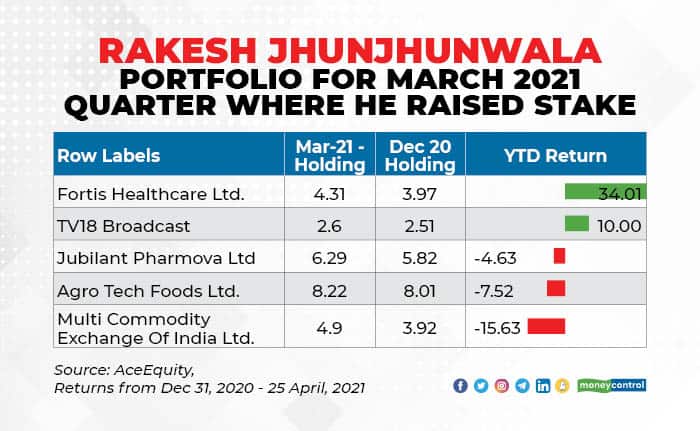 Fortis Healthcare is a play on the healthcare industry. Fortis has a network of more than 36 healthcare facilities (including projects under development), 4,000 operational beds, and over 400 diagnostics centres (including JVs) across India.

Not just Jhunjhunwala, many mutual funds have also increased their holding in Fortis from 10.74 percent to 12.25 percent in the March quarter while foreign investors preferred to book profits.

TV18 Broadcast, which is part of the Network18 Group, delivered stellar earnings for the quarter that ended in March 2021. The media firm reported a 77.03 percent rise in its consolidated net profit to Rs 251.08 crore for the quarter. The company had posted a net profit of Rs 141.83 crore in the year-ago period.

which is down by about 5 percent so far in 2021, is a company with strong fundamentals.

The company has high TTM EPS (earnings per share) growth, and has shown an increase in profits for the past two quarters, according to Trendlyne data. The company has zero promoter pledge.

Prabhudas Lilladher has an ‘accumulate’ rating on the stock with a target price of Rs 1,088.

“We increase our earnings estimate by 5%/28%/21% for the pharma segment as the management guided benefit from COVID-related products (CMO of vaccine, Remdesivir) would continue for next 18-24 months and Rubyfil in Europe would do well from FY22E,” said the report.

Agro Tech Foods is engaged in the business of manufacturing, marketing and selling food and food ingredients to consumers and institutional customers. The stock has fallen a little over 7 percent so far in 2021.

The company, with a market capitalisation of more than Rs 2,000 crore, has a very low debt on books, which is a positive sign. The company has zero promoter pledge, and mutual funds were seen raising stake in the March quarter to 3.06 percent from 2.9 percent earlier, Trendlyne data showed.

In Multi Commodity Exchange (MCX), Jhunjhunala raised stake by about 1 percent. He has kept his holding constant for the past 8 quarters, according to data available on Trendlyne.

There are two new entrants in Jhunjhunwala’s portfolio – Nazara Technologies and Jubilant Ingrevia.

He holds over a 10 percent stake in Nazara Technologies, which is a leading India-based diversified gaming and sports media platform with a big presence in the domestic market and across emerging and developed markets, offering interactive gaming, eSports, and gamified early learning ecosystems.

The mobile gaming company delivered an 84 percent year-on-year (YoY) growth in revenue to Rs 454.2 crore for 2020-21, backed by a healthy performance at the operating levels.

Jubilant Ingrevia serves the pharmaceutical, nutrition, agrochemical and consumer industries. The stock has rallied by about 30 percent so far in 2021.