Promoters share pledging at a 3-year high in August; 29 cos see 100% holding pledged

A high pledge is not considered a good sign by the investors as a downturn in the market price can lead to invocation and change in management.

Surprisingly, there were as many as 29 companies in which the complete holding (100 percent) of the promoters was under pledge. These include names like Ankit Metal, Bajaj Hindustan, DQ Entertainment, Diamond Power, and Kwality, among others.

A high pledge is not considered a good sign by the investors as a downturn in the market price can lead to invocation and change in management. Hindustan Zinc and Vedanta were the two companies where pledged shares of promoters went from zero percent to almost 100 percent in August on a month-on-month basis.
There were about 13 companies that saw promoters increasing their pledge in August compared to July. These include names like M&M, Adani Ports, and JSW Energy.There were 2 companies in which pledged shares were brought down to zero in August 2020 - Tirupati Forge (from 47.92) and Jyothy Labs (from 6.58), data showed. 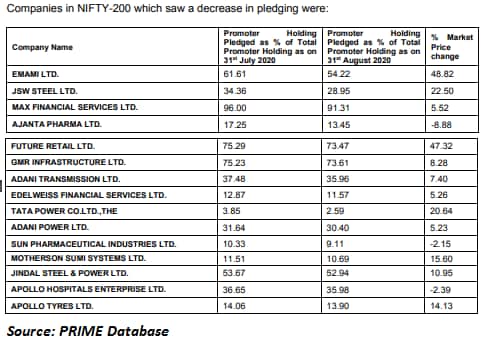 Overall, there were 51 companies in which the percentage of promoter holding pledged decreased in August 2020 including Emami, JSW Steel, Max Financial Services, Ajanta Pharma, and GMR Infra, among others.

Disclaimer: The above article is for reference only and not buy or sell recommendations. The views and investment tips expressed by investment experts on Moneycontrol.com are their own and not that of the website or its management. Moneycontrol.com advises users to check with certified experts before taking any investment decisions