Promoters of 30 BSE500 firms increased pledged holdings in Q4; do you own any?

Promoters' holdings in BSE-500 companies that are pledged fell in the March quarter as compared to the December quarter, a report showed.

The total percentage of pledged promoter holdings in these firms declined to 2.83 percent in the March 2019 quarter compared to 2.98 percent in December 2018 quarter, Kotak Institutional Equities said in a report.

In total, the value of promoter pledged shares stood at Rs 1.95 lakh crore in March 2019. This is about 1.38 percent of the BSE-500 index’s total market capitalization.

But a different trend was seen in some individual companies where about 30 firms saw a rise in pledged shares by promoters in the same period, as per the report.

Pledging of shares essentially means promoters take a loan against the shares held and use the proceeds for personal as well as business purposes.

Essel group stocks such as Zee Entertainment fell nearly 5 percent and Dish TV plunged by about 9 percent on May 7. "Essel Group stocks also have a majority component of their promoter’s shares pledged and it is this sale of pledged shares that is causing the stock price to decline," Umesh Mehta, Head of Research, Samco Securities said.

"Companies with high promoter pledged shares are considered to be extremely risky especially during tightening liquidity conditions. Hence, investors should study other qualitative aspects before getting into such stocks," he said. 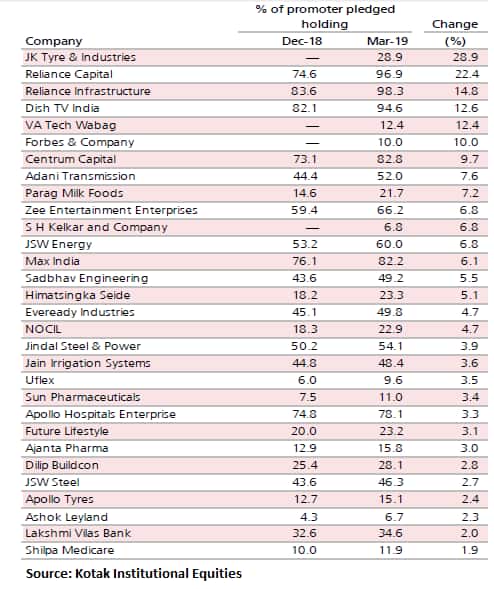 Although pledging of shares by promoters has created trouble for stocks like Zee Entertainment and Essel Group lately, the practice does not necessarily imply that a company or a promoter is under financial stress.

Banks (lenders) can sometimes seek additional security in the form of promoter shares.

Note: The above report is for information only and not necessarily buy or sell ideas