Pound party to continue as Brexit deal gets inked

At this moment the overall scenario looks much in favour of the Pound and will help Pound to scale higher heights.

Since the inception of 2018, Pound had been under severe pressure on account of pressures surrounding a hard Brexit as well continuous slack in the domestic economy hampering the growth in UK. This led to a fall in GBP/USD by nearly 8 percent. In line with its international counterpart GBP/INR appreciated by nearly 2 percent. The same story continued in the 1st half of 2019 as well.

However, since the start of Sep’19 both GBP/USD and GBP/INR has sky rocketed. In that time frame, GBP/USD has gained by nearly 7.8 percent while GBP/INR has depreciated by 8 percent. This rise in pound is on account of hard Brexit jitters fading away. To the delight of many market anticipates across the globe the Brexit drama seemed to coming to an end when the UK stopped being an EU member on 31st Jan’2020. 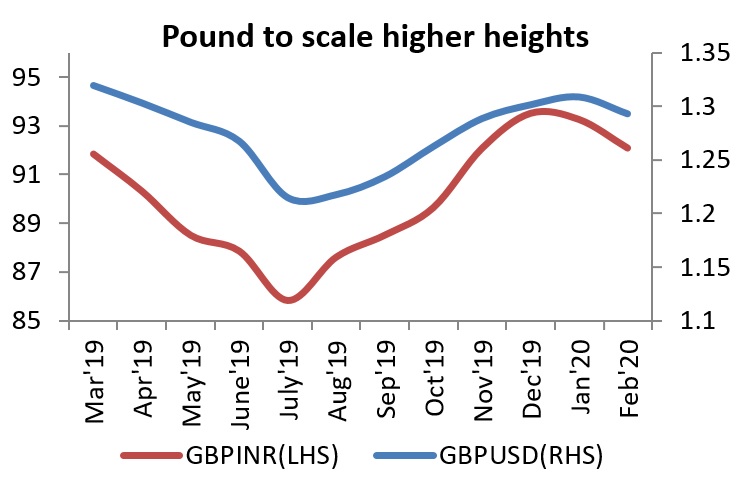 The Saga of Brexit drama

The UK parliament had rejected the Brexit deal in Dec’18 which was secured by Theresa May from EU.

PM Boris Johnson secured a Brexit deal with the EU on October 17, 2019. This deal also got consent from the Parliament but the UK ministers disapproved the PM’s hush hush time table to leave the Union before October 31, 2019.

This compelled the UK PM to request the EU leaders for an extension of the Brexit deadline till 31st Jan’20. Following the request from the UK’s PM the EU leaders were ready to provide and extension as well.

However, when everyone felt the drama has ended PM Boris Johnson decided to raise snap elections on the 12th Dec’19 just a month before the new Brexit deadline. But this time Boris Johnson won the UK elections with a thumping majority and with his win the fate of the Brexit deal got sealed.

Once Boris Johnson resumed the Parliamentary session he had enough support in both the houses to get the deal passed. Hence as expected the Brexit deal got passed by both the houses of the UK Parliament and UK finally left the EU on 31st January 2020.

Global factors in support of Sterling

US FED had increased interest rates by four times in 2018. However, in its in Oct’19 meeting Jerome Powell decided to cut interest rates by 25 bps amid slowdown in exports and business investment scenario. This rate cut by US FED was the third for the current year. The earlier rate cuts happened in Sep’19 and July’19 meeting.

Trade tensions between US and China have always remained in centre stage of the global factors since its inception in 2018. However, on 15th Jan’20 US and China signed the phase one of the impending trade deal.

Under the agreement, China has promised to buy an additional $12.5 billion in US agricultural products in year one, and then $19.5 billion in year two. The signing of the phase one of the trade deal provided major boost to the sentiments of global capital markets

Going ahead the Brexit transition period will continue to provide certain volatility in Pound. Headwinds for UK had subsided in the last couple of months. But the next 11 months remain crucial for UK as it would determine its fate for future relations with the EU.

With the Brexit deal inked but an uncertainty regarding the transition period still remains. Boris Johnson needs to get the trade deal with EU inked within this period for smooth future trade relations with the European Bloc.

On the global front with US FED trimming down its interest rates and the phase one of the trade deal signed, these factors should likely help in the strengthening of pound.

However, at this moment the overall scenario looks much in favour of the Pound and will help Pound to scale higher heights.

(The author is Research Associate - Currencies at Angel Broking.)