Over 6% of promoter holdings in BSE 500 companies pledged

The percentage of pledged promoter (by majority shareholder) holdings in BSE 500 companies was steady overall in the December 2018 quarter in comparison to the September quarter, showed a Kotak Institutional Equities report.

The percentage of pledged promoter holdings was at 6.7 percent in the December quarter similar to that of September 2018. Outstanding promoters pledged shares worth Rs 1.96 trillion, which is about 1.47 percent of the total BSE-500 index’s market capitalization in December 2018, said the report.

Promoters of 116 companies pledged their holdings in the BSE-500 index compared to 114 in September 2018 quarter. Out of 116, 30 companies saw an increase in pledge holdings by 2-21 percent in the December quarter (QoQ). 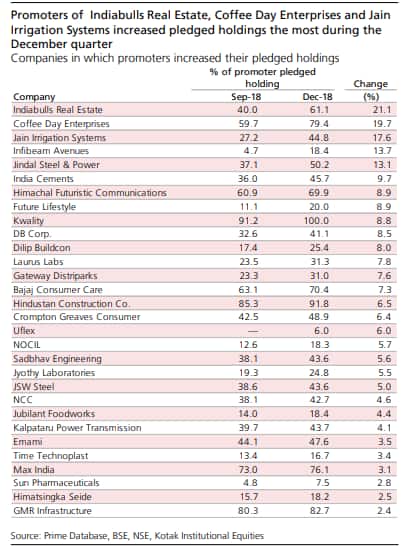 (Note: Stocks mentioned are for information only and not buy or sell ideas)

Kotak in the note clarified that pledging of shares does not necessarily imply that a company or a promoter is under financial stress; it could also be that banks (lenders) could have sought additional security in the form of promoter shares.

Fresh promoter pledges were seen in Texmaco Rail, Uflex and Wockhardt, while promoters who revoked their entire pledged holdings was seen in Sonata Software.