The December quarter earnings were largely in-line as the number of beats (16) and miss (17) are equally balanced in the NIFTY50 index.

The December quarter earnings were largely in-line with estimates. The economic slowdown led to a demand slowdown which impacted the earnings, but there were more than 50 stocks that managed to double their bottom line on a year-on-year basis.

As many 53 stocks more than doubled net profit on a YoY basis in the December quarter and eight of them recorded a rise of more than 1,000 percent, data from AceEquity showed.

Companies in the BSE 500 index which witnessed an exponential rise in their bottom line in the December quarter include names like Uflex, Deepak Fertilisers, JM Financial, Cholamandalam Financial Holdings, UPL, APL Apollo, Godrej Properties, and ITI.

At a time when the demand environment is slowing down, a select group of stocks managed to buck the trend and could well remain the choice of traders. But, investors should also note that the rise is also supported by external factors, and not pure fundamentals, suggest experts.

“These companies which have doubled their PAT on YoY basis and increased more than 1000% are going to be the prime choice of traders. We can see that the companies which have achieved this feat are from different industries and across sectors,” Gaurav Garg, Head of Research at CapitalVia Global Research Limited- Investment Advisor told Moneycontrol.

“Some external reasons may also have aided these companies e.g. Corporate tax cut, strong financial results. Another reason is that Budget 2020 had economy stimulating elements and we can expect growth in all major sectors, therefore, positive sentiments at both macro (economic) and micro (company) level can aid these companies to become emerging stars of December quarter,” he said. 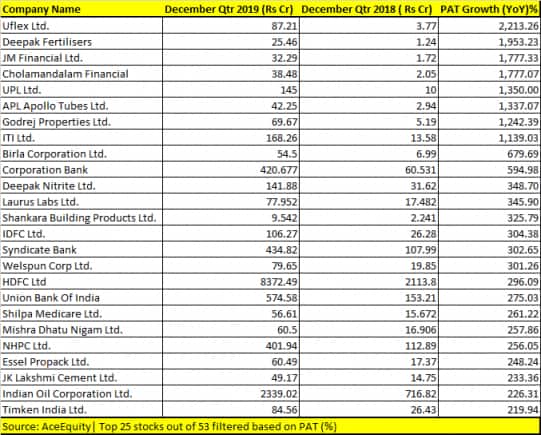 Santosh Meena, Senior Analyst, TradingBells told Moneycontrol that some of the companies did very well while there is the impact of a one-off in some of the stocks with the benefit of the corporate tax cut.

“Stocks like Deepak Nitrite, Mishra Dhatu Nigam Ltd, APL apollo ltd and Rallis India beat the street estimates both on profit and margin front amid worries of economic slowdown and they may continue to do well in coming days,” he said.

The December quarter earnings failed to lift investor sentiment, and looking at the results there is a higher possibility that demand environment is likely to remain muted in the March quarter as well largely on account of Coronavirus concerns.

Investors must carefully look at overall stock valuations and balance sheets as well as should compare on a quarter on quarter basis, suggest experts.

“The above-mentioned stocks have strong fundamentals for the long run and can give 20-30% returns here onward. Until and unless we find some fundamental changes which might hamper the performance of the company we are keeping the optimistic view on the mentioned stocks,” he said.

Asher is of the view that all the stocks look fundamentally strong if we look at the long term horizon and the companies have also shown a very bold performance quarter on quarter and also the year on year results have been quite impressive.

For the Nifty (including financials), the topline was nearly flat YoY with the bottom line outperforming with the growth of 9.8 percent YoY basis, ICICIDirect said in a note.

The December quarter earnings were largely in-line as the number of beats (16) and miss (17) are equally balanced in the NIFTY50 index, said a brokerage note. However, at the broader market level misses exceeded beats by ~30 percent.

The key outlier on the sectoral front in Q3FY20 was the banking space with improving asset quality and recovery of stressed loan accounts. But, hardly there were any green shoots which were visible, suggest experts.

“The Nifty50 as a barometer has shown healthy PAT growth of 21% on a YoY basis supported by a cut in tax, it is the marginally below the expectation of 26% growth. From the 49 companies (Excluding YES BANK), 12 was above expectation, 12 inline and 25 below the expectation,” Vinod Nair, Head of Research at Geojit Financial Services told Moneycontrol.

“The best performing sectors were NBFCs due to improvement in liquidity which reduced the cost of funds and lower provisioning. FMCG did well in line with the expectation while IT was muted but marginally above the expectation,” he said.

Nair further added that the weak performers were Auto due to weak demand, Oil and Gas due to lower GRMs (gross refinery margin) and higher prices, cement due to low demand and lower cement prices, Pharma due to fall in demand & pricing power in global market and Metals due to lower international prices and demand.