On the list: Mutual funds bought and sold these 30 stocks in May

After falling sharply in March to a low, the market recovered some ground in April on hopes of stimulus package to cope with the economic impact of coronavirus outbreak. But in May, indices once again turned negative despite boost from RBI and the goverment.

Sensex lost nearly 4 percent and the Nifty50 corrected close to 3 percent in May. The decline was less in broader markets (Midcap/Smallcap down 1.4/1.8 percent) compared to benchmarks.

The stimulus package of around Rs 21 lakh crore announced by Prime Minister Narendra Modi and Finance Minister Nirmala Sitharaman failed to cheer the market as it focussed more on supply side than demand.

FII inflow into equity in May was better than inflow from mutual funds and DIIs. FIIs net bought Rs 13,914.49 crore in cash market during May, while DIIs bought equities worth Rs 12,293.19 crore and mutual funds purchased Rs 4,977.37 crore worth of shares (though better than outflow of Rs 7,153.91 crore in April).

The inflow of funds into equity mutual funds declined further in May to Rs 5,257 crore from Rs 6,213 crore in April 2020. The inflow in March, when benchmark indices crashed 23 percent each, was at Rs 11,723 crore.

But the inflow through Systematic Investment Plans (SIPs) remained consistent at over Rs 8,000 crore. SIP inflows were at Rs 8,123 crore in May against Rs 8,376 crore in April.

Job losses and negative market outlook has prompted a lot of people to pause or stop their SIPs, which could be the reason for decline in SIP inflow, said Narnolia Financial Services.

The mutual fund's equity segment has seen most of the buying towards funds that  have a largecap bias in them. Large Cap funds witnessed inflows to the tune of Rs 1,555 crore, which was higher compared to Mid Cap funds & Small Cap funds which saw muted inflows at Rs 279 crore and Rs 293 crore, respectively.

On the other hand, highest selling by AMCs was seen in Piramal Enterprises, Biocon, Torrent Pharma, ABB and Hindustan Zinc, ICICI Direct said. 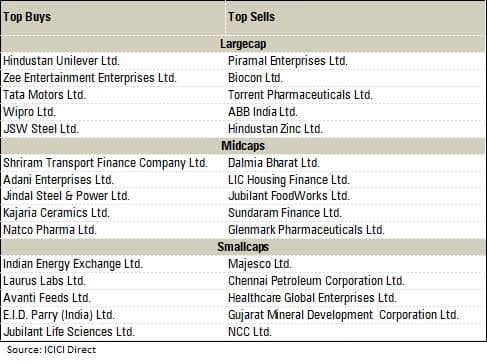 Jindal Steel & Power continued to be in the top five buying list in May as well, while Shriram Transport was under the selling list by AMCs in April.

However, stocks, which saw selling by AMCs were Majesco, Chennai Petroleum, Healthcare Global, GMDC and NCC, the brokerage added.

In April too, Chennai Petroleum was in the selling list.

Overall net assets under management (AUM) of the mutual fund industry rose by 2.6 percent to more than Rs 24.54 lakh crore May against April, but it declined 5.4 percent year-on-year.

In the June so far, the market has been in a positive territory with benchmark indices rising 4 percent but underperformed broader markets as the BSE Midcap index was up over 6 percent and Smallcap gained nearly 9 percent.

Experts feel the market needs confirmation on the vaccine and growth numbers in coming months, till then it is expected to consolidate going forward, while the trend of buying in quality stocks than others will continue.

"It is just one factor that is important, that is the trajectory of growth, employment, and prices. The earnings growth and the level of interest rates, that is the cost of money, would depend on this one factor. However, any undue negative influences can be mitigated by investing in quality stocks and portfolios," Bhavesh Sanghvi, Chief Executive Officer at Emkay Wealth Management told Moneycontrol.

"Since 2017-18, there is a perceptible change in the way equity investments are made, that is, there is an inherent focus on quality stocks despite attractive valuations. In recent times, this trend has become stronger, and appreciable price performance is seen mainly in quality stocks. And quality is not something that is confined to any particular market cap, but one is bound to find most of the quality companies in the largecap space, and less sparingly in the midcap space," he said.

Disclaimer: The views and investment tips expressed by investment expert on Moneycontrol.com are his own and not that of the website or its management. Moneycontrol.com advises users to check with certified experts before taking any investment decisions.
Sunil Shankar Matkar
TAGS: #Market Edge #Nifty #Sensex
first published: Jun 15, 2020 10:29 am