The Nifty is relatively more insulated from the supply shock and probably gained market share from unorganised sector, the brokerage says.

The Q1FY21 earnings, so far, have turned out better and have not given any shock or negative surprises, brokerage firm ICICI Securities has said in a note.

"The early birds from Q1FY21 earnings season within the Nifty50 index contracted their top line by nearly 6 percent, which does not reflect any ‘shock and awe’ in terms of negative surprises and, in fact, have provided a higher number of earnings beat so far," said ICICI Securities.

None of the Nifty50 companies which reported Q1FY21 earnings thus far have had a big negative surprise, while most either beat estimates or were in the neutral zone, it said. 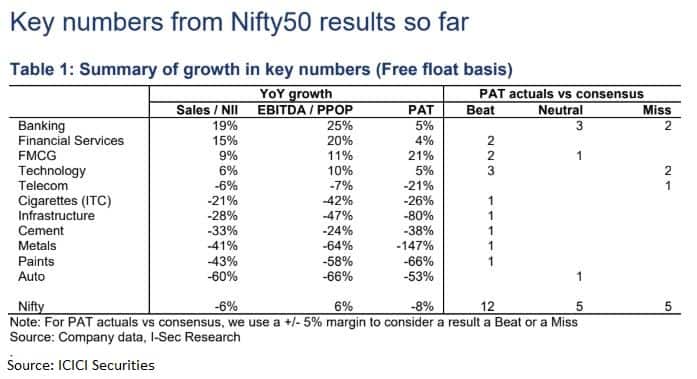 "This reading makes us more confident of our earlier argument that given the sharpest cut to forward earnings since the GFC due to COVID-19, the over-estimation in earnings seen since FY14 will reduce going ahead, especially if we see an economic recovery in FY22," ICICI Securities said.

As per the brokerage, economic activities that contracted the most in terms of top-line are the usual suspects: auto (down 60 percent YoY), infrastructure, cement and paints (down 30 percent YoY), metal (down 41 percent YoY), cigarettes (down 29 percent YoY) and hotels (largely closed).

The Nifty's operating income (EBITDA and PPOP for financials) has expanded by 6 percent, driven by control on operating costs, while the free float PAT contracted 8 percent, so far, largely driven by a sharp jump in provision for losses by banks and NBFCs, the brokerage said.

ICICI Securities is of the view that financials are still a case of "Schrodinger’s cat" paradox.

"Like the Schrodinger’s cat paradox, we will not know if the cat is dead or alive (NPA outcome of COVID-19) unless the box is opened (moratorium is over). While the leading banks have provided comforting narrative so far, the NPA situation will only unravel once the moratorium period is over," it said.

ICICI Securities is of the view that the Nifty is relatively more insulated from the supply shock and probably gained market share from unorganised sector.