The Nifty50 finally clocked a historic high on November 26 as bulls were finally able to take control of the D-Street after a three-week power struggle with the bears.

The positive sentiment came in the light of progress in US-China trade deal, easing fiscal concerns and pick up in credit disbursement along with strong consumer demand across segments

"Cues that US & China will conclude a deal by next month lifted the sentiment across the globe. Reconstruction of Sensex indices & new developments over divestment to curb fiscal deficit provided confidence in the Indian market. Expectations of a further cut in interest rate by RBI, gave the advantage to rate-sensitive stocks," Vinod Nair, Head of Research at Geojit Financial Services told Moneycontrol.

The bull run which started on September 20, after the corporate tax cut, added nearly 13 percent to the benchmark indices.

It took Nifty50 116 sessions to reach the record high. Data suggests that more than 30 percent Nifty500 stocks participated in the rally, with the top 100 clocking double-digit returns. 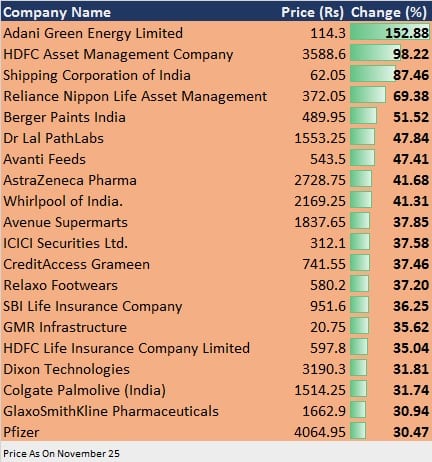 Note: Above stocks are just an information and not recommendations

The above list includes most of the insurance and AMC stocks which rallied due to strong earnings growth and high under-penetration in sectors. Consumer stocks also saw buying interest during this period. Foreign institutional investors continued to provide strong support to the market from the last month. They net bought Rs 17,683.31 crore worth of shares during October-November, especially after government measures and a continuous bond-buying program by the ECB and US Federal Reserve.

Experts expect the momentum to continue along with intermittent consolidation as they feel the economic recovery is likely to be seen from the second half of FY20 onwards and trade deal between US and China is seen happening in the coming month.

"The prolonged trade war between US & China was weighing heavily on Indian indices. Positive Statements made by both officials last week indicating that a trade pact is likely by the end of December 2019 are being welcomed. Moreover, FIIs are preferring Emerging Markets such as India as the recent easy monetary stance of Fed & ECB has improved liquidity in world markets," Sandeep Nayak, ED & CEO of Centrum Broking told Moneycontrol.

"Whereas, India's economy is seeing a demand revival especially in the sectors of auto and consumer durables. The government providing relief to telecom companies over spectrum-related dues and impending price increase planned by players has also revived interest in the sector," he said.