Nifty witnesses best quarter in 11 years even as COVID-19 cases spike; 16 stocks that rose more than 100%

Even though most investors might be seeing a drawdown of more than 10 percent in their portfolios, the party is not over for equity markets, not yet, say experts.

From just 1,200 on March 31 to more than 5,66, 840 cases on June 30, India is seeing a sharp rise in known coronavirus infections but that hasn’t deterred Nifty50, which has rallied about 20 percent in the same period. It is the index’s best performance since the June quarter of 2009 when both the Sensex and the Nifty rallied over 40 percent.

The worldwide spread of the coronavirus resulted in lockdown, hampering economic activities. The IMF has said the global economy will contract by 4.9 percent in 2020, almost 2 percentage points below the April forecast.

Broader markets have outperformed the benchmark index during the period. The S&P BSE Midcap index rallied 23 percent while the S&P BSE Smallcap index witnessed a surge of 29 percent in the June quarter, AceEquity data showed. There are more than 100 stocks in the S&P BSE 500 index that rallied more than 50 percent. Hindustan Copper, DCM Shriram, Hindalco, Cipla, M&M, Avanti Feeds, Adani Gas, Sterlite Technologies, SPARC, BHEL, and Hero MotoCorp are some of the gainers.

Equity markets across the globe have rallied on liquidity infusion by central banks. FIIs, which were net sellers in the cash market in March and pulled out another Rs 5000 crore in April, are net buyers in June, so far, and have poured in more than Rs 7000 crore.

“The G4 central banks came together to salvage the situation by pumping in massive liquidity of ~USD 6tn. This unparalleled liquidity injection has led to pullback rally across world markets,” Centrum said in a report.

The Indian market has come up in line with global equity markets and been almost in line with EMs from the bottom levels of March-2020, said Sunil Tirumalai, Head of Research & Strategist at Emkay Global. "This is on the back of unprecedented monetary policy support from global central banks, and signs of the peak of COVID infections count in many developed countries," he said.

Sectorally, the action was seen in the energy space that has rallied more than 45 percent in the last three months followed by the S&P BSE Auto index that gained 40 percent. The S&P BSE telecom and healthcare indexes are up 35 percent each. 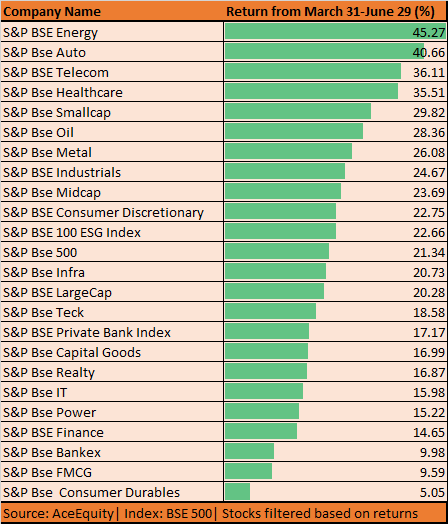 Every crisis is an opportunity. Even though most investors may be seeing a drawdown of more than 10 percent in their portfolios, the party is not over for equity markets, not yet, say experts.

The current situation has been compared to the one in 2008 but every crisis is different and investors should act accordingly because the sectors perform differently from crisis to crisis.

“Every crisis has a different flavor and style of its own. This time rather than being a financial crisis, it is a health crisis and worrying. Whether the aggregate Mcap rise or fall, identifying individual sectors which have its own bull and bear phase with changing fundamentals needs to be closely studied,” Paras Bothra, President of Equity Research, Ashika Stock Broking told Moneycontrol.

Identifying companies and emerging leaders likely to benefit from the tailwind of a sector is a reliable way to make sustainable wealth. "Whether the overall market is in a bear or a bull market, there will be sectors which are always having a bull or a bear phase of its own for reasons mentioned above,” he said.

Vinay Paharia, Chief Investment Officer of Union Asset Management Company Private Ltd, said he was overweight on sectors like healthcare, IT, and telecom and underweight on consumer discretionary and financials.

As India begins Unlock 2 phase from July 1, analysts are of the view that there is plenty of pent-up demand in consumption and capital goods stocks. Some of the beaten-down sectors could also see buying.

“As the lockdown unwinds and the economy stabilises, analysts see a lot of opportunity in the consumer discretionary companies, which will see a revival in demand and also share prices in certain consumer segment have been beaten down considerably,” said Gaurav Dua, SVP, Head-Capital Market Strategy & Investments, Sharekhan by BNP Paribas.

“The pandemic has a relatively lower impact on rural and agri economy, consequently, we also see rural demand-driven stocks outperforming in the near term. On the other hand, consumer staples (FMCG), capital goods and IT services companies could underperform over the next six months,” he said.