Nifty rejig: D-Mart, HDFC Life and SBI Life among front runners that could be included

Stocks which are likely to be excluded from the Nifty50 are Bharti Infratel, Vedanta, Zee Entertainment, Tata Motors and GAIL India, ICICI Direct feels.

Four stocks in Nifty could see a rejig in the upcoming September review.

"We believe the upcoming Nifty review in September 2020 will be the biggest reshuffle seen in recent history. Perhaps we may witness a change in four stocks in the upcoming review," ICICI Direct said in its latest report.

The Nifty has shed almost 40 percent in just two months from its January highs amid global weakness. The sharp decline is more profound in stocks with a few of them having fallen more than 50 percent.

In fact, the fall was across sectors and indices due to weakness in corporate earnings and economic growth worries after the novel coronavirus or COVID-19 pandemic forced te biggest nations to come to a standstill mode.

The National Stock Exchange does a half-yearly review of indices in September and given the sharp fall in stock prices, there could be a major reshuffle in Nifty50 at least.

"The whole exercise is a bit interesting considering three months are still left before any announcement will be made regarding inclusion and exclusion from the index. However, considering the significant declines in some of the index stocks, we believe there will be some definite changes in the upcoming review," ICICI Direct said.

According to the brokerage, Avenue Supermarts (D-Mart), HDFC Life, SBI Life, Divis Labs, Dabur India and Pidilite Industries are likely stocks which could be included in the benchmark Nifty50 in September review. 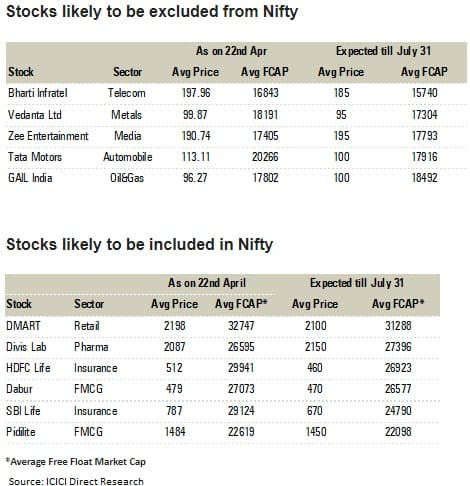 One of the criteria for inclusion in the Nifty is that security must have F&O contract, which means the stock must be traded in futures & options segment.

"As of now, D-Mart is not part of F&O segment. If it does not get included in F&O, then it will not be added in the Nifty. In such a scenario, despite being the largest among the replacement pool, it will not be a part of the Nifty," ICICI Direct said.

In such a scenario, Divis Lab, HDFC Life, Dabur and SBI Life could be part of the Nifty; and hence in case D-Mart remains without F&O contracts then these four stocks could be part of Nifty.

The brokerage feels the next close contender is Pidilite Industries, which could also be part albeit with a lower probability if it outperforms the rest in coming months.

In case D-Mart gets an F&O contract in the next couple of months, then along with it Divis Lab, HDFC Life should be part of the Nifty, it said. "Dabur and SBI Life are almost at par as per our calculation. Relative outperformance will be key."

Combined weights of upcoming stocks is likely to be 2.9 percent in the Nifty against outgoing stocks weightage of just 1.5 percent, according to the brokerage.

Stocks which are likely to be excluded from the Nifty50 are Bharti Infratel, Vedanta, Zee Entertainment, Tata Motors and GAIL India, ICICI Direct feels.

"In the above list, stocks with lowest free float market cap are shown. Maximum 10 percent of the index size (number of stocks in the index) may be changed in a calendar year. Hence in CY20, maximum of five stocks can be replaced from the pool of 50," it said.

In the first rebalancing of this year, already one stock Yes Bank was excluded. It was replaced with Shree Cement.

Hence, there is room for further changes up to four stocks in the next announcement expected in September 2020, said the brokerage.

As per its analysis, the average free float market cap of highlighted stocks is likely to remain low. Hence, they are likely to be excluded, it said.

ICICI Direct believes at least three out of the above five stocks could be replaced in the next rebalancing. "There may be four replacements if stocks from the replacement group remain resilient."

The likely average price has been arrived at considering the recent sharp decline in stocks along with expected recovery in the next couple of months, it said. 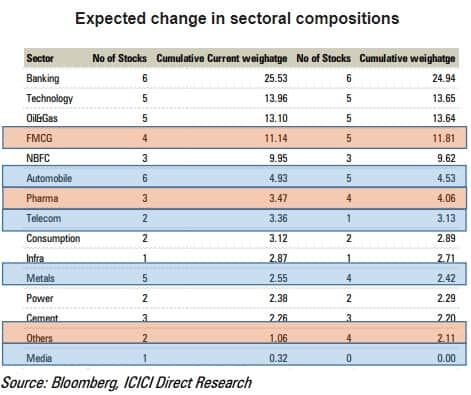 Disclaimer: The views and investment tips expressed by investment expert on Moneycontrol.com are his own and not that of the website or its management. Moneycontrol.com advises users to check with certified experts before taking any investment decisions.
Moneycontrol News
Tags: #Market Cues #Market Edge #Nifty
first published: Apr 27, 2020 11:31 am