The periodic rejig will be effected on September 30

Adani Enterprises could see the maximum inflow and Shree Cement the maximum outflow after the Nifty indices rejig takes effect on Friday, according to Edelweiss Alternative and Quantitative Research. The former is being included in the Nifty50 index and the latter is being excluded from the same index after the semi-annual exercise.

PSU stocks BEL, HAL and IRCTC, which are new entrants in the Nifty Next 50 index, could get inflows of $45 million, $29 million and $27 million each. 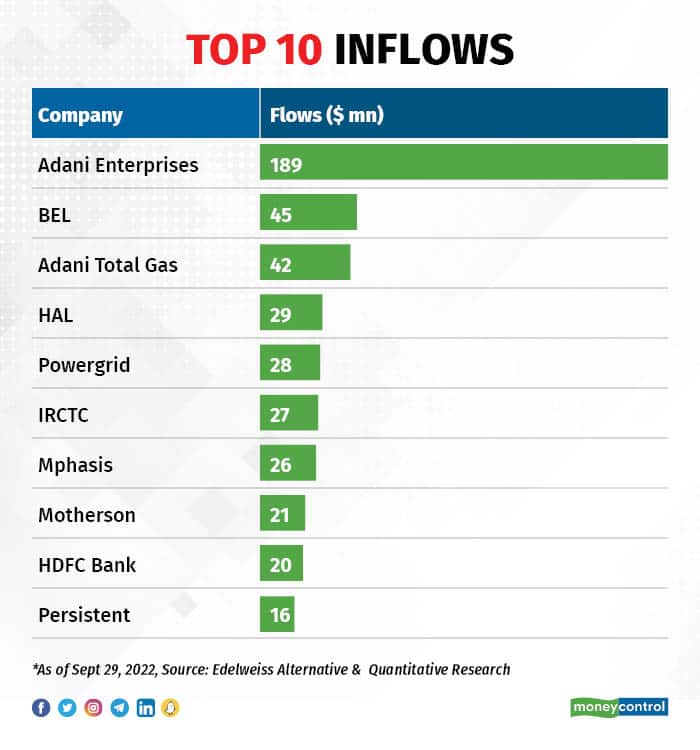 The indices are rejigged periodically, when stocks are included or excluded depending on the change in their average free-float market cap. When a stock is on the index, it automatically gets money from passive funds that track indices.

Adani Enterprises is part of indices of MSCI Enterprises and FTSE India Index. “Interesting, the only Adani Group stock missing in MSCI Standard Index is Adani Wilmar and the key deterrent is free float,” said Abhilash Pagaria, head of alternative and quantitative research at Edelweiss.

(Disclaimer: The views and investment tips expressed by experts on Moneycontrol.com are their own and not those of the website or its management. Moneycontrol.com advises users to check with certified experts before taking any investment decisions.)(Disclaimer: MoneyControl is a part of the Network18 group. Network18 is controlled by Independent Media Trust, of which Reliance Industries is the sole beneficiary.)
Asha Menon
Tags: #Adani Enterprises #Adani Group #Nifty rejig #Nifty50 #NSE Indices Ltd #Shree Cement
first published: Sep 29, 2022 12:57 pm