Foreign investors in July sold more than Rs 11,000 crore worth of shares after a denial to tweak surcharge on super rich by the government

Nifty fell from its record high of 12,103 (on June 3) to psychological 11,000-mark on July 31 plunging 9 percent in a span of two months, dragged majorly by auto, banking & financials, energy, infra and metals stocks.

Proposal to increase the surcharge on super rich was the main reason behind such a fall. A slowing economy, a slump in demand in certain sectors and geopolitical tensions didn't help the market sentiment either. 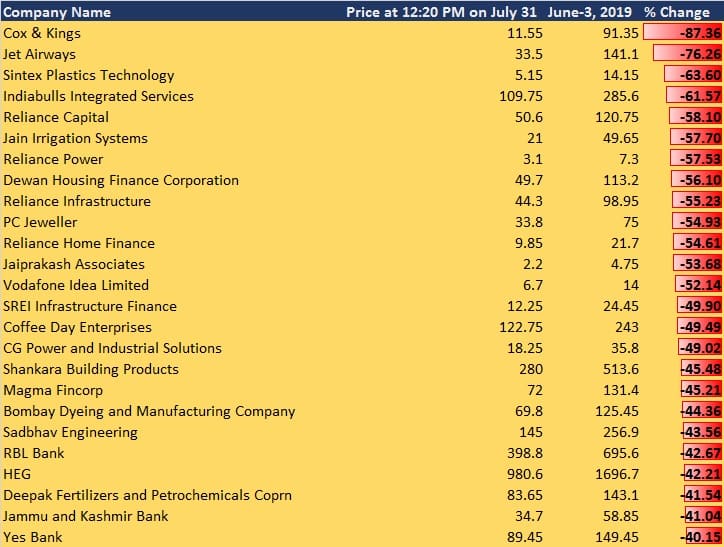 The sharp correction in most of above stocks is because of high debt and corporate governance concerns.

Foreign investors in July sold more than Rs 11,000 crore worth of shares after a denial to tweak surcharge on super rich by the government.

"Indian equities are passing through a tough phase, reflecting factors like weak economic growth and a weak corporate earnings growth environment. However this has been known for a while, so are fears of a global slowdown & a weak monsoon. The more recent slowdown, I believe, is on account of disappointment among FIIs over tax proposals," Rajiv Singh, CEO, Karvy Stock Broking told Moneycontrol.

He said in the near term, a rate cut by the Fed should be helpful for global equities, and boost sentiment for all emerging markets including India.

Also read: Fed cuts rates, signals it may not need to do more

But he feels Nifty may see a further fall but ruled out a sharp plunge of 5-10 percent in coming months.
Sunil Shankar Matkar
Tags: #Market Edge #Nifty #Sensex #video
first published: Aug 1, 2019 09:55 am