Nifty off record highs, but more than 20 Nifty500 stocks available at 50% discount

Most of the stocks which witnessed a huge selloff have some structural or fundamental reason attached to it hence, some of them might not qualify as a value buy.

The Nifty is down more than 10 percent from its record high of 12,103 recorded on June 3 but there at least 20 stocks trading at a steep discount of 50 percent or more in the Nifty500 index.

Most of the stocks which witnessed a huge selloff have some structural or fundamental reason attached to it hence, some of them might not qualify as a value buy, and will be best to avoid catching the falling knife.

“You may catch a falling knife but you should be doubly sure of that both the sides of the knife are not equally sharp. It hurts only if both the sides are sharp, and if only one side is sharp then you will be able to catch it comfortably with your experience,” Dr Joseph Thomas, Head of Research at Emkay Wealth Management, told Moneycontrol.

It was important to follow the market, identify value and growth and choose investments selectively, he said. “In a scenario of falling markets, during which time things become cheaper and cheaper still with each passing day, one needs to be more careful because everything would look the same and equally attractive,” Thomas said.

He added that higher tax surcharge on high-networth individuals (HNIs) and foreign investors and the absence stimulus package dented sentiment on D-Street after the budget. 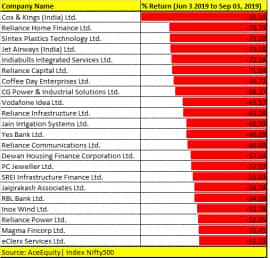 Markets have failed to hold on to crucial support levels since June, dragged down by a bruising trade war between the US and China, and a slowdown in economic growth and earnings of India Inc at home.

Recent measures announced by the government will improve the sentiments and help revive the economy, but there will be a lag effect.

Most experts are of the opinion that it could take two or more quarters for the measures to show results, but investors can start accumulating large and quality midcaps for their portfolios.

“We believe that as and when the economy rebounds, largecap will first move and small and midcaps will follow. Thus it makes sense to accumulate,” Atish Matlawala of SSJ Finance & Securities told Moneycontrol.

In terms of sectors, those related to economy are likely to do well. “Amongst the sectors, we believe auto, FMCG, PSU banks and infrastructure are likely to be key beneficiaries of the measures announced by the government along with RBI reserve transfer,” Ajit Mishra, Vice President, Research, Religare Broking, told Moneycontrol.

The sharp correction in midcap and small cap indices, heightens valuation concern among those companies. “Hence, we expect midcap and smallcap companies would also participate equally with the rally in large caps,” he said.

India’s GDP was at a six-year low for the June quarter and most of the macro numbers are pointing towards a slowdown. But, we are not alone. Most of the developed economies are also slowing down, which makes India a preferred investment destination.

The growth rate has come down from 8 percent in the year-ago period to 5 percent but is still faster than most of the other economies. The government has taken plenty of measure in recent days to boost consumer and investor sentiment, which is a positive sign.

Investors are advised to look at companies available at an attractive valuation, with low debt levels and consistent growth outlook.

“We believe that this is a cyclical downturn for the market. With a stable government, recently announced growth stimulus, liquidity surplus and slowly getting past the NPA and NBFC problems has now brought markets in a position from where they can give superior returns to investors,” Arun Thukral, MD & CEO, Axis Securities, said.

“The criteria for any long-term investor should be to pick good quality stocks that have overcorrected in last one and a half years but which have given a good set of numbers despite the slowdown, have strong and proven management, relatively low debt and the sector outlook of that stock is very good to achieve superior results over long term,” he said.

Dharmesh Kant, Head, Retail Research, IndiaNivesh said it was always wise to leave 10-15 percent gains on the table if chasing over 100 percent returns than to be caught on the wrong side and lose 50-70 percent of the capital. Smart research is the only criteria before picking stocks in a falling market.