Nifty may touch 12,400 in coming months; these 3 sectors can outperform

Going ahead, the brokerage expects Nifty Bank to continue its positive momentum and head towards 33,000 in coming months as it is the 123.6 percent retracement of the entire previous decline (31,783-26,642).

The Nifty50, after a three-week of consolidation, finally gained solid strength and hit a historical high of 12,132.45 on November 26, backed by hope of a US-China trade deal in the coming months, consistent FII inflow and likely strong earnings growth from FY21 onwards though on a low base.

Such strong strength with a breakout after a consolidation, seen since the start of November, has boosted sentiment and confidence of market experts to raise further target for the indices.

"The three week's consolidation breakout signifies acceleration of the upward momentum which makes us confident to revise our earmarked target towards 12,400 in coming months," ICICI Direct said.

Close
Structurally, the index has witnessed faster retracement as, over the past 44 sessions, it entirely retraced preceding 73 sessions decline (12,103–11,670), indicating a structural improvement, it added. In fact, the Nifty50 rallied more than 13 percent from September 20 when the government slashed corporate tax rate and announced several other measures to bring the sentiment back on track.

Even the technical charts from September indicated the positive vibes as the Nifty is heading towards the formation of bullish candle on monthly charts for the third consecutive month.

Therefore, ICICI advised a temporary breather from here on should be capitalised on to accumulate quality stocks.

According to the brokerage, metals, infra, pharma and capital goods stocks could be bargain buys now while banks, telecom and realty sectors are likely to be outperformers.

However, IT is the only sector that is expected to underperform market going ahead, ICICI Direct feels. 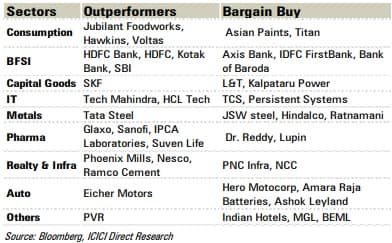 The brokerage expects midcap stocks to relatively outperform the benchmarks in the coming months, hence it recommended investors to buy quality midcap stocks as the broader market looks lucrative for participation in the impending up-move.

"The midcap index has formed a higher base above 200-day SMA, placed at 16,840, indicating inherent strength that augurs well to resolve out of long term falling trend line (drawn adjoining subsequent highs off January 2018 of 21,840 and 20,088), placed at 17,150. The falling trend line breakout would confirm the termination of long term corrective bias that would open the doors for next leg of up move (around 8 percent)," it said.

The Nifty Midcap 100 continued to underperform the benchmark index especially after the strong outperformance in 2016-2017, rising 9.6 percent since September 20 against 12.5 percent rally in Nifty50. 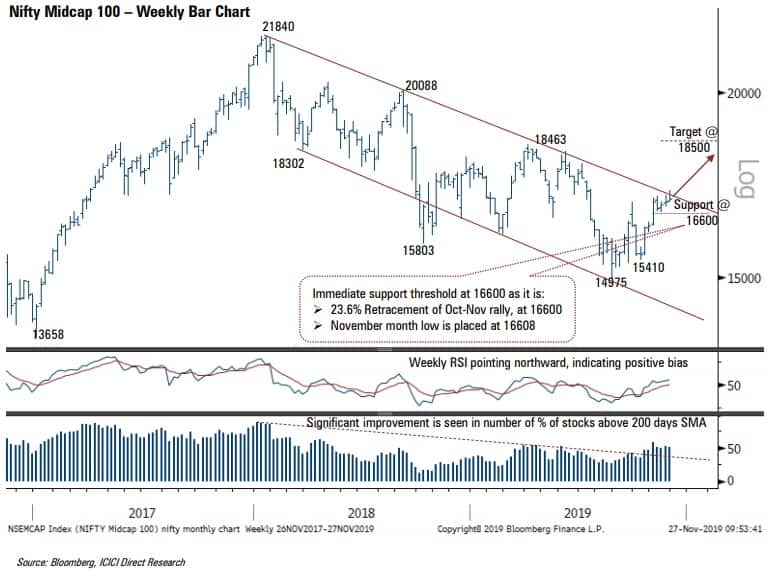 On expected lines, Nifty Bank surged amid broad based buying as the index closed higher for a third consecutive month, up 5.5 percent outperforming Nifty50 (up 1.35 percent.

Going ahead, the brokerage expects the index to continue its positive momentum and head towards 33,000 in coming months as it is the 123.6 percent retracement of the entire previous decline (31,783-26,642).

"We expect the index to maintain higher high-low on the monthly chart. We do not foresee the index breaching the crucial support area of 30,000-30,300 in the short-term," it said.