Following this relentless upmove both the small & midcap Indices seem to be losing a bit of the momentum as they are approaching rising channel resistances, says Agarwala.

A breakout in Nifty post a long phase of consolidation usually has a strong extended follow-on moves. The index has been consolidating for two-and-a-half months. Any temporary declines may be used as an opportunity to go long on the index for targets of 15,780-16,220, Aditya Agarwala, Senior Technical Analyst, YES SECURITIES said in an interview with Moneycontrol’s Kshitij Anand.

Q) In May, Nifty hit fresh record high. What led to the price action in the week gone by?

A) “Sell in May and Go away” was not true this year and the price action in May month trade suggested there was little chance of Nifty-50 Index declining in a big way, if anything.

Markets were due for a decent rally following two and a half months of long consolidation while its peers continued to head north. 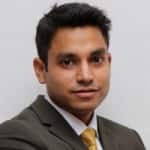 Moreover, strict restrictions imposed in several states led to a steady decline in the Covid-19 cases which could, in turn, lead to the reopening of the economic activity faster than expected.

Q) What is your outlook on markets post record highs?

A) Indian markets have successfully climbed the wall of worry and are now on course to continue their uptrend in the month of June as well.

Technical indicators, especially RSI, is still quite a distance away from reaching overbought territory which suggests that the rally has more legs on the upside and can test levels of 15,780-16,220 in the coming sessions.

Moreover, this breakout following long two-and-a-half months of consolidation usually has strong extended follow-on moves. Therefore, any temporary declines may be used as an opportunity to go long on the index for targets of 15,780-16,220.

A) Small & Midcap Indices have continued to outperform the benchmark indices in the month of May as well with gains of 8% & 6%, respectively.

However, following this relentless up move both the Indices seem to be losing a bit of the momentum as they are approaching rising channel resistances.

Therefore, minor profit booking and underperformance cannot be ruled out in the coming trading sessions.

Q) Sectorally, IT, Realty index were top sectoral gainers. What is fuelling the rally in IT and Realty stocks? Telecom and Metal have seen some profit-taking in the week gone by down over 1%.

A) Nifty IT Index though was up 4% in the week gone by but it is still oscillating in a broad trading range and is now approaching the upper end of the range placed at 27,750 which would act as a stiff resistance.

Any significant move in the IT Index and stocks will be witnessed on a successful breakout from the upper end of the trading range.

Another concern for IT stocks could be the appreciating INR against the US Dollar which doesn’t bode well for the IT stocks.

The Nifty Realty Index has outperformed with gains of 7% in the month so far and 3.4% in the week gone by. Chart patterns and the price structure on the higher time chart are encouraging and look set to break out of the multi-year resistance at 370-375 levels.

Technical Indicator RSI has turned upwards from the previous support zone of 47 which suggests there is strength in the uptrend and is likely to continue in the month of June.

Q) What should be the strategy – should one book profits as indices touch record highs or hold for more gains?

A) Indices that are hitting fresh 52-highs or record highs after a long consolidation phase is a sign of strength and indicates that there is room for more upside and they are the ones that should be held for more gains in the coming sessions.

Q) Taking cues from May expiry – how do you see the June series panning out. What is the kind of levels you foresee for Nifty?

A) The Nifty50 Index ended the May expiry on a strong note and a strong rollover suggests that the June series should play out well for the bulls.

Further, the index has broken out of a long consolidation hitting new highs which confirms more strength and higher levels should be seen in the month of June.

Q) Your 3-5 stocks for investors for the June series?

The stock has turned upwards after making a double bottom at levels of 990 and is now on the verge of a breakout from a consolidation pattern.

Further, RSI has turned upwards after taking support at the 60-level which happens to be the upper end of the bear zone confirming the bullishness. Volumes have also picked up in the breakout candle suggesting higher levels.

The stock is on the verge of a breakout from a bullish Flag pattern suggesting bullishness building up. A sustained trade beyond 1230 will trigger the breakout taking the stock higher to levels of 1300.

RSI has also taken support at the 60-level and turned upwards which is a confirmation of strength.

The stock is on the verge of a breakout from the upper end of the Triangle pattern resistance placed at 1340, a successful breakout on volumes will take the stock higher to levels of 1500. RSI has also turned upwards after forming a positive reversal suggesting bullishness.

Q) What should investors do with stocks hitting fresh All Time/52-week highs. Will these remain to be a strong trading play in June as well?

A) Any stock hitting a fresh all-time high or a 52-week high is a sign of strength, its displays outperformance of the stock, and investors/traders should definitely remain invested in these stocks as they could continue their trend upwards in the month of June.