On the impact of LTCG tax, he explained that investments are decided not by taxation policies alone, but capability of that asset class to grow

Even as the market looks to rebound after a steep fall from their all-time highs, experts at Motilal Oswal Securities believe that a volatile time is in store ahead.

“You may see a lot of volatility this year. There was no volatile moves seen in 2017, but this time there are multiple events which could lead to volatile moves in the market. Political uncertainty, rising interest rates scenario in the US, rates in India going up along with the biggest risk being in the form of crude price,” Gautam Duggad, Head of Research —Institutional Equities at Motilal Oswal Securities told Moneycontrol’s Sunil Shankar Matkar and Uttaresh Venkateshwaran in an exclusive interview.

Speaking on the impact of long-term capital gains (LTCG) tax, he explained that investments are decided not by taxation policies alone, but capability of that asset class to grow, which is a function of earnings growth, PE multiples and macro stability, among other things.

His five big bets include private financials, auto, consumption, select oil and gas as well as IT. Edited excerpts:

The market has been rangebound after the 10 per cent fall from its highs. Any specific reasons for this movement?
There are a few factors responsible broadly. One is bond yields - the way in which it has behaved in the past three months. Also, globally too, US interest rates have gone up. One equation in that was that the cost of capital was very benign for the past three years. You were getting good returns despite flattish earnings but now it has gone up.
Close 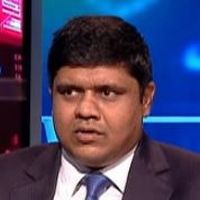 Earnings growth has not recovered yet but It is expected to recover and strong hopes are there for FY19 recovery. Till that time, you have to deal with higher cost of capital and that has brought down market.

Second and most important factor has been policy-related events like introduction of LTCG , which created some nervousness and people booked profits.

The third factor  is political uncertainty. Losses in bypolls had happened and a key ally left the ruling NDA alliance. Plus, midcaps were trading at significant premium to large-caps, which they still are, even after 15 percent correction.

All these factors are weighing on the market. Also, we are coming on the back of a very strong year (30 per cent returns in the Nifty). Thus, I expect the market to be rangebound given the multiplicity of factors at play.

So, will the midcaps see some sort of comeback?
On the contrary, largecaps will outperform in our view. Valuation premium of midcaps and small caps is almost at an all-time high and that has to correct. Midcaps may start to underperform largecaps. They have performed significantly over the past three years. So, a mean reversion can happen.

Midcap is also a function of liquidity. Midcaps are less liquid stocks and even a small amount of selling can bring rates down rapidly. Small buying does the opposite too. They are function of domestic fund flow. They go into midcaps typically and foreign flows typically go into largecaps. However, as long as flows keep coming around Rs 10-15,000 crore per month, I don’t think there will be a big scare in midcaps.

For 2016 and 2017, domestic inflows are more twice more than FII flows. As long as this continues, you will not see meaningful correction from these levels. Nifty is trading at 17.5 times. EPS (earnings per share) estimate is around Rs 595 for FY19. It is not a valuation where people get scared. But then again, markets also don’t follow averages – it undershoots as well as overshoots.

Can current levels on the market be justified?
At 10,000, you are trading at 17-17.5 p/e, at 5-10 percent premium to long period average. And, you are looking at earnings recovery ahead. Typically, when earnings bottom out, markets don’t top out. Both don’t happen together.

There are signs of recovery seen across the board — consumption, investment, private banks etc. all of that point to some improvement in macro and micro.

In an earlier case, post 2014, you had very strong macros such as improvement in twin deficits, stable currency, lower inflation and rise in forex reserves, among other things, but earnings had not picked up. Now, the earnings have picked up but macros have deteriorated. Inflation has gone up, interest rates are showing signs of rising, bond yields are already up 100 basis points. So overall – micros have improved but macro has deteriorated.

How do you expect the Street to perform this year? What are the key risks?You may see a lot of volatility this year. We had hardly any volatility 2017, but this time there are multiple events which could drag it down. Political uncertainty, rising interest rates scenario in the US, rates in India going up along with the biggest risk being in the form of crude price.

If crude price rises, inflation will go up, so will fiscal deficit and so on. The government’s leeway to spend on infrastructure will be hampered and to me that is a big risk.

What is your take on the banking sector, especially in the wake of the PNB fraud case?
The PNB incident has made the market anxious. Clearly, people were beginning to believe NPA mess will bottom out, which it may as NCLT (National Company Law Tribunal) cases are progressing very fast. PNB event just soured the sentiment. Fraud of that scale in a big bank has spooked the market. It raises question mark on governance and robustness of the system. But, I don’t think one needs to be too negative about it as it was a localised fraud. We have always been in favour of private banks and identified several long term themes of Value Migration in our thematic report published in Jan’17. One of them was PSU banks to private sector migration and that can go on for many years.

In case of PSU banks, there are huge NPAs to be taken care of. Resolution of couple of cases will improve sentiments. Will that allow PSU banks to come back and start lending again remains to be seen. Private banks don’t have problems of capital and they will be the largest components of the index. This is due to inherent strong growth that they have. PSU banks have to solve their balance sheet issues first.

How will recapitalisation help?
The money could be used to clean up NPA books. Larger part could go into clean up. We like retail focussed banks as there are no big shocks. The penetration levels are very low in India. That can grow for multiple years at a higher rate. Market share gains will happen. So we like HDFC Bank, IndusInd Bank, AU Bank and RBL Bank. These are house favorites.Are there chances of more rate hikes by the US Fed?
Even if it is 3, or 4, we are talking about additional 25 bps hike. Investment returns are not a function of 25 extra basis points of interest rates. Investors with long term approach may not have big impact. For a day to day trader, this will make a big difference. I don’t have a strong opinion whether it will be three or four hikes. Even if it is four, given their track record, they will prepare the market for it.

Incrementally, it could impact FII flows. But importantly, the earnings recovery story is important.

Nifty earnings now is expected to grow at 20 percent next year. People will invest if there is political stability, Earnings recovery is in place and if the macros are in balance. Then 25-50 bps of fed rate changes will not create much impact..

We expect earnings growth to be 10-12 percent in FY18 and that was due to the low base of last year. For FY19, right now we are building in it is 25 percent growth. But, bulk of growth, 40 percent of that, is Tata Motors, SBI, ICICI Bank and Axis Bank, where risks to earnings growth are there. Also, the impact of Feb’18 RBI circular needs to be seen in 4QFY18 earnings performance of corporate oriented banks. So downside risks to earnings growth exists for both FY18 and FY19.

What could be the impact of LTCG on investments?
Firstly, for many investors, this will not even apply as tax is applicable on gains above Rs 1 lakh. Secondly, investments are decided not by taxation policies alone, but capability of that asset class to grow, which is a function of earnings growth, PE multiples and macro stability, among others.

So I don’t see someone who sees a potential of 20 percent returns not entering just because he has to pay 2 percent on 20 percent gain. It will create some volatility till March 31 as people try to minimize their tax outgo.

How is our central bank expected to treat rate hikes?
At present, we are seeing a reversal of monetary stimulus. Macros are not the sole determinant of market performance. On the other hand, just because macros are good does not mean you will make good money. You need earnings growth too. I don’t pay too much attention to global macros. Ultimately, earnings growth matters. With elections coming up and a subsequent rise in government spending in the hinterlands, what is your take on consumption and rural theme?

I have been a big fan of consumption since 8-9 months and we have published two volumes of rural strategy reports outlining our views on the same. Now you are getting even more prominent signs of rural consumption picking up and corporate commentary on that has turned better. The government will also spend money ahead of elections. Lot of things also depend on how monsoon pans out and I am assuming there will not be a big scare on monsoons.

Speaking of sectoral outlooks, how is IT and pharma placed?
IT is already showing signs of revival. It is a sector which is what we call in our value migration report at the risk of entering phase three of value migration. IT is a big sector and growth rates have moderated. Growth is coming from digitization, AI, robotics and machine learning etc. Legacy part is not growing at the same pace at which it used to grow. Therefore cumulative growth rates have moderated. Therefore, PE multiples may not go back to earlier levels. P/E multiple is in 13-17z range now. Now, there is pick up in global economy. Rupee equation is favourable and commentary has improved. It has become a defensive bet, like quasi -cash. People are hiding in IT and FMCG.

On pharma, stocks have corrected. But, there is equivalent earnings downgrade. Issues pertaining to vendor consolidation in US, pricing pressure in US and regulatory challenges have not dissipated completely. So, I doubt if it will recover in a hurry even though we believe it makes for good contra investment.

What are your five big bets?We prefer names with strong earnings visibility in current market environment. We like private banks, auto, consumption, select oil and gas as well as IT. We like Titan, Pidilite, and Britannia. Among auto companies, we prefer Maruti Suzuki, M&M, and Motherson Sumi. In the banking space, we like HDFC Bank, AU Small Finance and RBL Bank. In the oil and gas space we like Petronet. In the IT sector we like Infosys, Tech Mahindra and Persistent.
Sunil Matkar