Since September 20, most stocks on the BSE 500 index have shed their gains on corporate default fears, PMC crisis and Q2 earnings

It looked like the fortunes of the Indian markets would change last month after the Government slashed corporate tax to fire up the economy which led to a breakout, but bears soon took control of the D-Street, pushing Nifty and Sensex below crucial support levels.

A cut in corporate tax rate lifted investor sentiment which led to a breakout on September 20, but rising trade war tensions and negative news flow from the banking space has hit sentiment and pulled the markets lower.

“A host of negative news has been haunting the market in the past couple of weeks thus restraining the market momentum. Globally, uncertainties like Brexit and delay in resolution of the US-China trade war are major overhangs for the market going ahead,” Paras Bothra, President of Equity Research, Ashika Group of Companies told Moneycontrol.

“Back home, a new set of corporate defaults and the PMC crisis spooked the investors’ confidence. In addition to the above factors, global rating agencies fear that the present slowdown could be related to long-lasting factors,” he said.

Bothra further added that despite corporate tax rate cut by the government, the market failed to hold on to substantial gains registered earlier, partly in anticipation of subdued Q2 corporate earnings growth and partly because of sour sentiment in the financial sector. 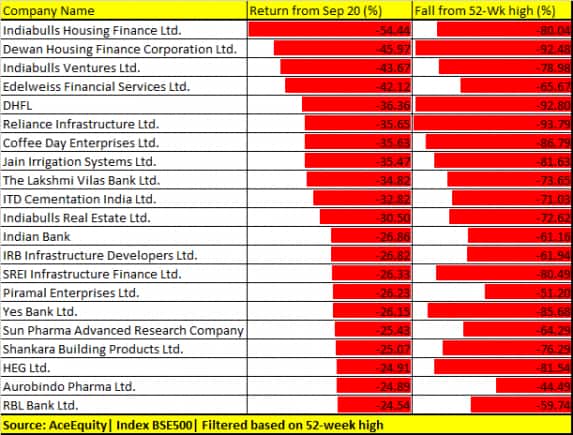 The recent volatility seen in markets could be seen as a buying opportunity for long term investors as more than 400 companies or 82 percent of the top 500 companies listed on the BSE are down over 10 percent from their respective 52-week high, data from AceEquity showed.

As many as 69 companies fell 50-90 percent from their 52-week high including Wockhardt, Rain Industries, Indian Bank, IRB Infrastructure, Inox Wind, Indiabulls Ventures, Reliance Communication, among others.

“Buying into stocks that recently slipped from their highs may be a good strategy for momentum traders but is not advisable for investors,” Romesh Tiwari Head of Research CapitalAim told Moneycontrol.

“Investors should always look for stocks that offer good value and growth prospects for the price and that requires systematic research, patience, and financial discipline,” he said.

There is no fixed or iron-clad secret formula for picking stocks as the markets are by nature "unpredictable". Investors should always look closely at promoters and insiders' actions (buying, selling or pledging of shares) which could give some insight into the future course of action, suggest experts.

Data suggests that most of the stocks in BSE 500 index have wiped off the gains since September 20 on the backdrop of renewed fear of corporate defaults, PMC crisis and expectation of subdued Q2 earnings growth for Corporate India, they say.

“The correction in several stocks is a result of profit booking, as well as concern over muted demand and expensive valuation as the recent government measures, could take time to yield results,” Ajit Mishra Vice President, Research, Religare Broking Ltd told Moneycontrol.

“Some of the good companies are available at an attractive valuation, thus providing a margin of safety. On the other hand, one should exit/book losses in stocks with deteriorating fundamentals, high debt, and corporate governance concerns,” he said.