Majority of domestic asset managers see scope for up to 15 percent further fall in benchmark – Nifty 50 and BSE-Sensex – from current levels amid macroeconomic volatility and tightening global monetary policy, according to the latest edition of Moneycontrol’s Market Sentiment Survey.

Domestic stock indices have already corrected more than 11 percent from their record highs hit in October 2021 but have outperformed other major markets like the US, China and the European Union in that period.

If the worst-case scenario of 15 percent correction from the current level of the Nifty 50 played out, the index would stand below the 14,000 points mark giving up more than 25 percent from the record highs. 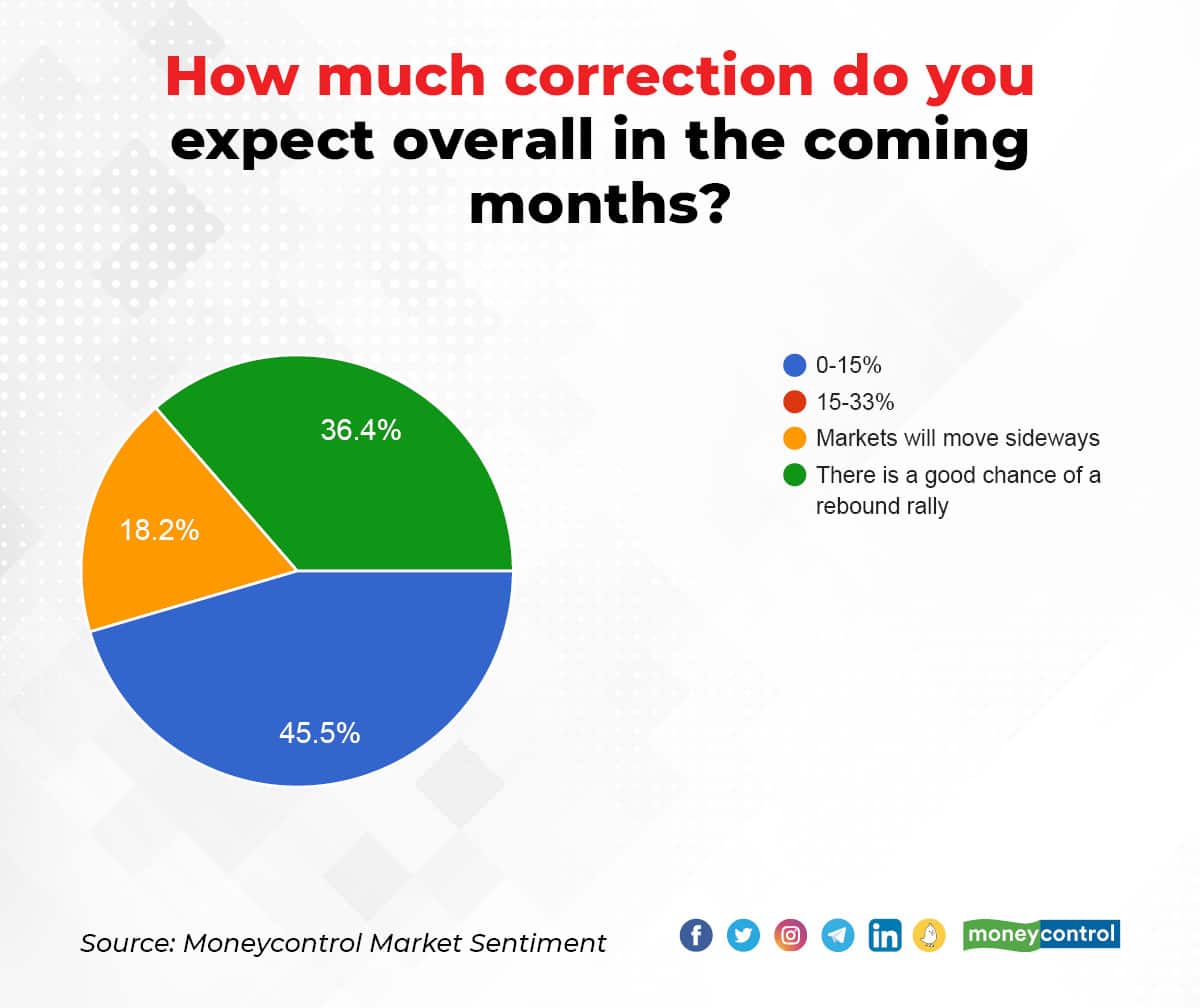 That said, one in three fund managers polled expected a rebound rally in the market after months of consolidation in a 3,000-point range. In terms strategy, four in five fund managers said that they will buy every dip in the market reflecting their optimism for long-term returns and overall economic growth. The optimism of fund managers of strong long-term returns in the market stems from their expectation of Nifty 50 earnings rising 10-15 percent in 2022-23. More than 90 percent of the respondents saw 10-15 percent growth in earnings as compared to 75 percent in the April survey. Given the volatility, banks and fast-moving consumer goods companies emerged as the top choice of surveyed fund managers for seeking refuge from the ongoing market volatility. Those two sectors were followed by information technology and automobiles.

In terms of taking a contrarian bet in the market, 54.5 percent of the participating fund managers recommended going overweight on automobile companies’ stocks while 27.3 percent suggested going underweight on commodity producers. 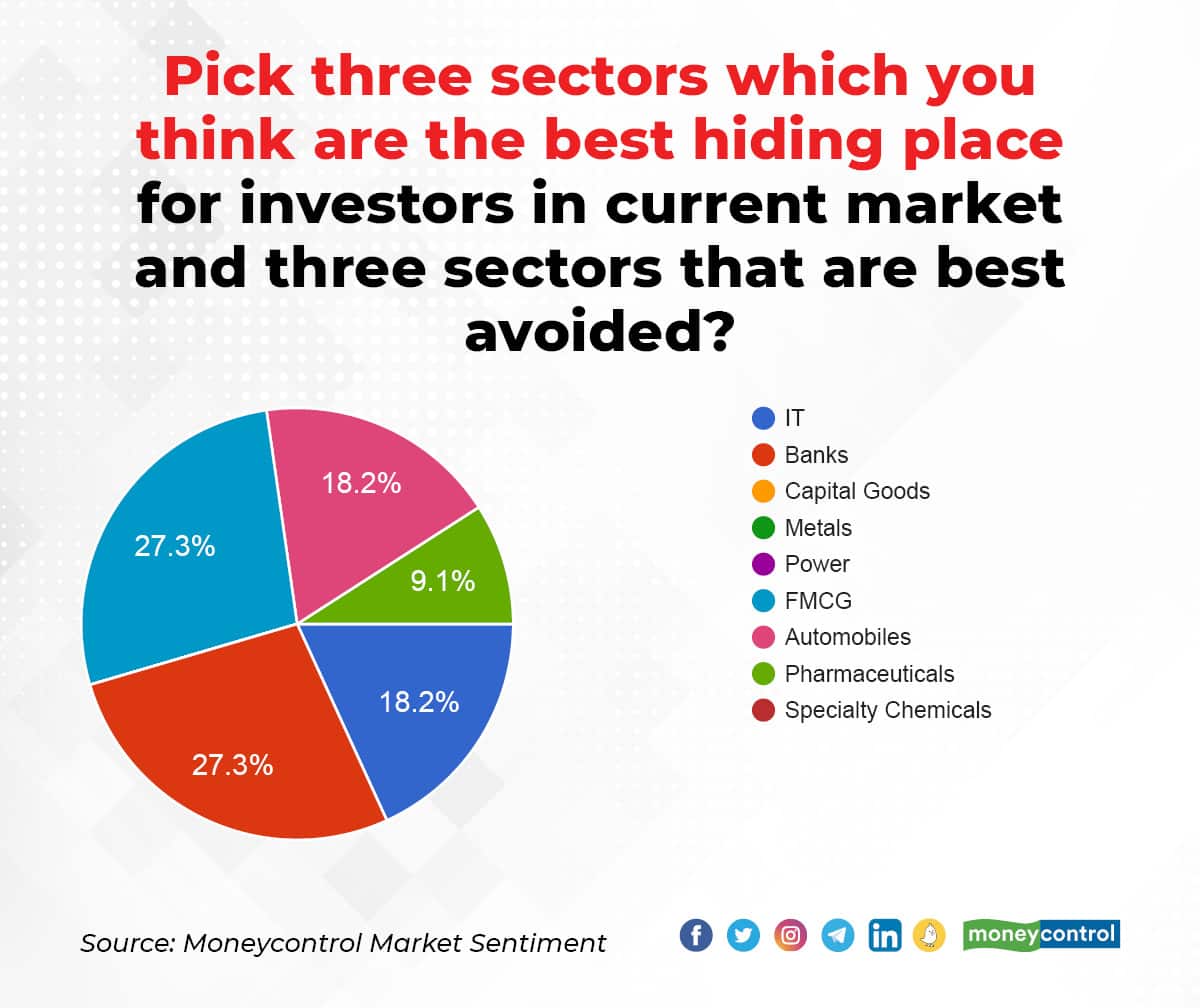 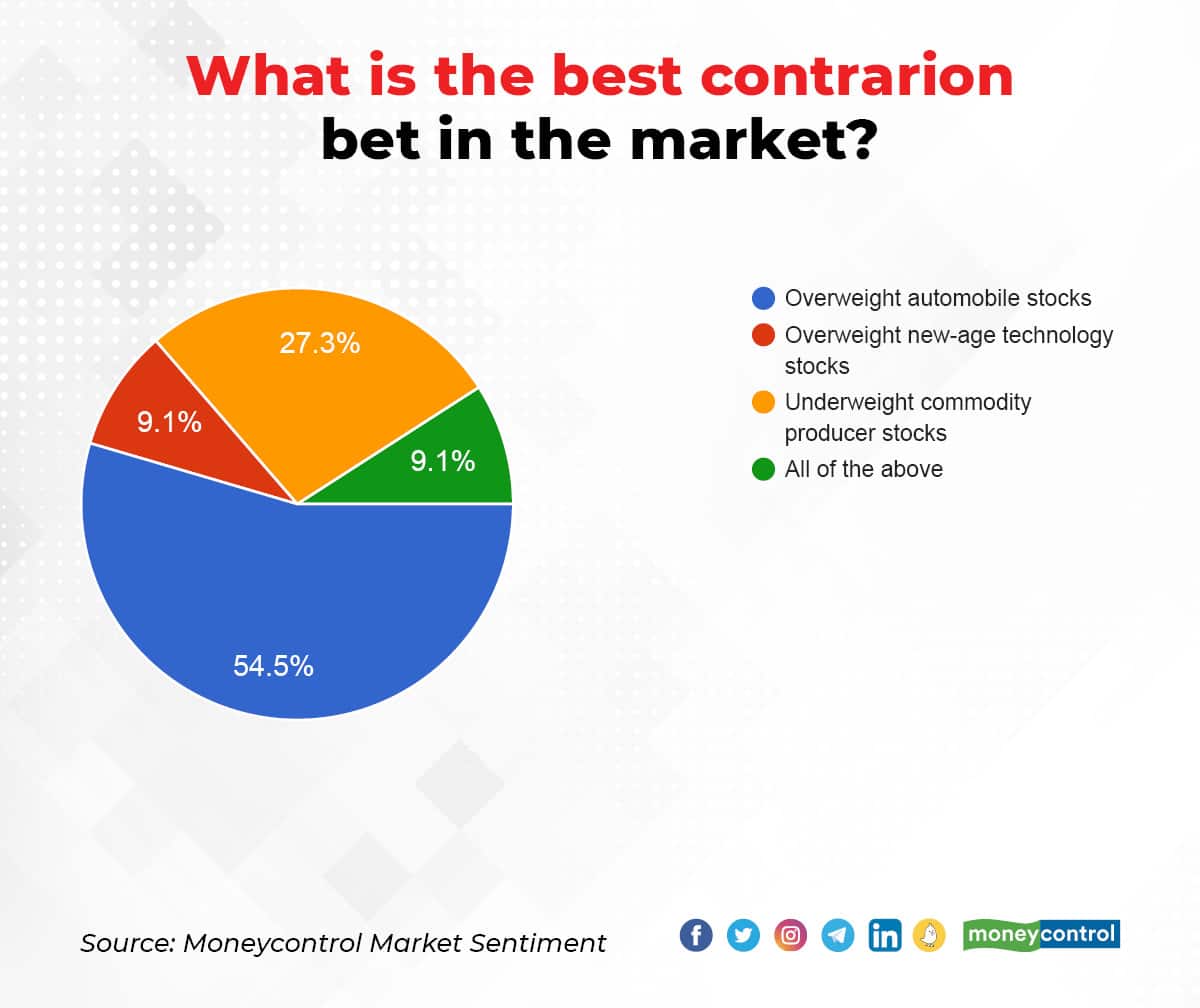 On the macroeconomic front, two in three fund managers expected the Reserve Bank of India’s Monetary Policy Committee to raise interest rates by another 100-125 basis points that will leave the repo rate at 5.4-5.65 percent. Earlier this month, the MPC raised the interest rate by 40 basis points following an emergency inter-policy meeting. 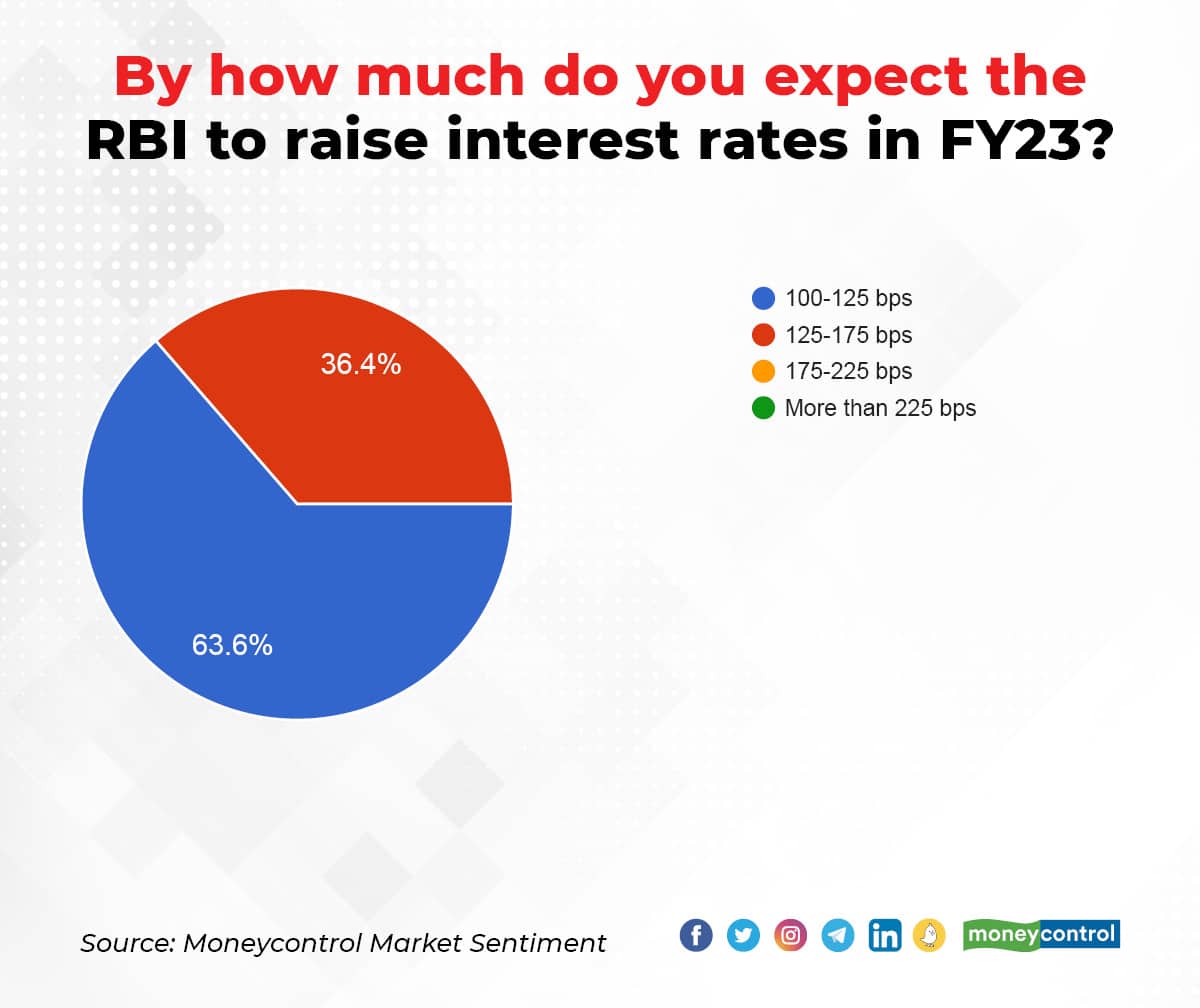 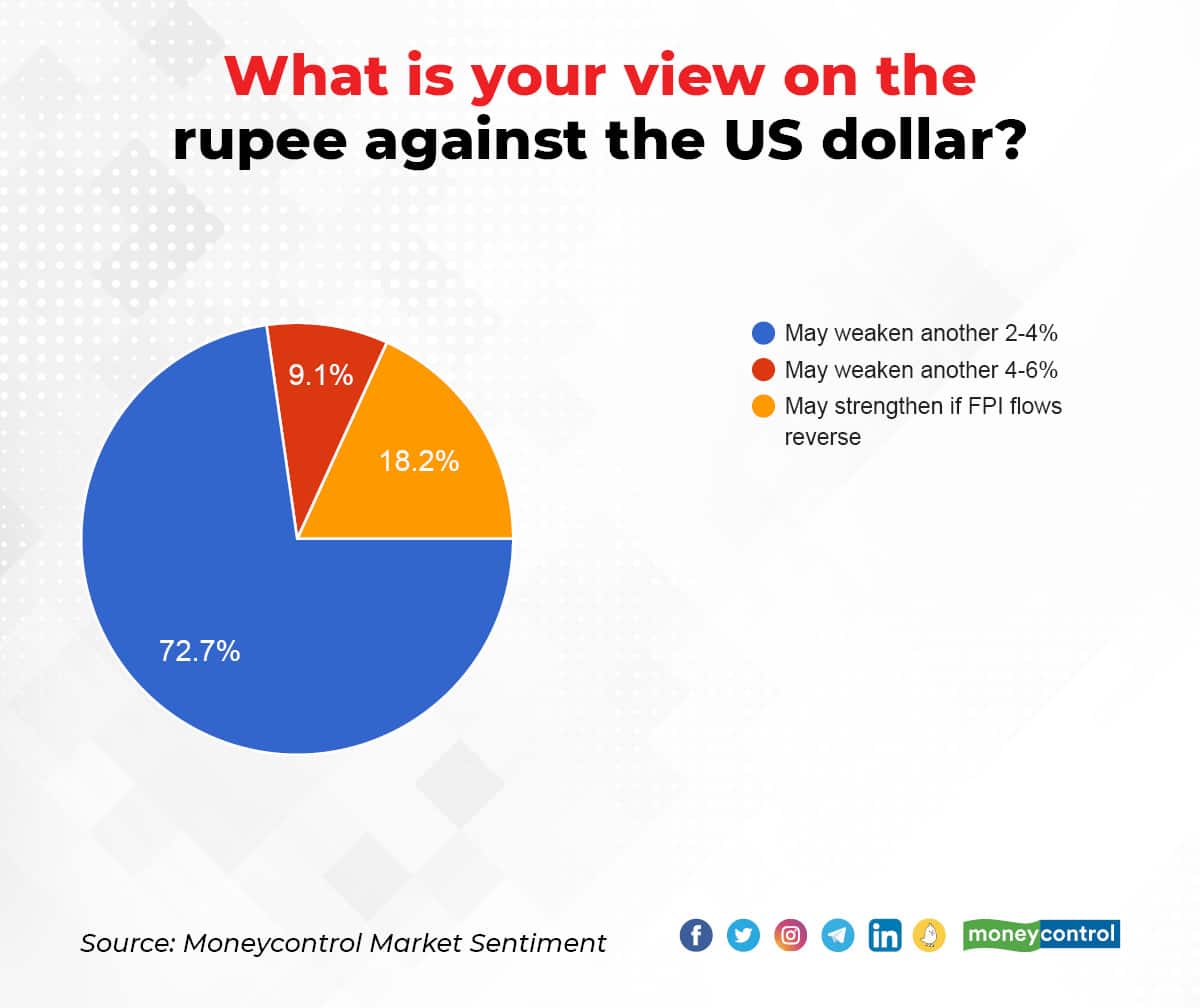 Fund managers were also downbeat on the currency as they expect the rupee to depreciate another 2-4 percent against the US dollar going ahead following a more than 4 percent decline so far in 2022.
Moneycontrol News
Tags: #Market news #Moneycontrol Market Sentiment Survey
first published: May 20, 2022 04:35 pm