172@29@17@243!~!172@29@0@53!~!|news|business|markets|midcaps-likely-to-outperform-nifty-if-market-resumes-uptrend-in-next-few-months-3961751.html!~!news|moneycontrol|com!~!|controller|infinite_scroll_article.php!~!is_mobile=false
Subscribe to PRO at just Rs.33 per month. Use code SUPERPRO
you are here: HomeNewsBusinessMarkets

The recent correction is mainly led by the weakness in global markets, on mounting fear of an adverse outcome of the trade talks between the US and China

From an investment perspective, if the market resumes the uptrend hereon, then the midcap space has a higher probability of outperforming the large-cap space in next few months, Ruchit Jain, Equity Technical Analyst, Angel Broking Ltd, said in an interview with Moneycontrol’s Kshitij Anand.

Q: Sensex and Nifty have fallen massively in May. What should investors do now ahead of election results?

A: After registering an all-time high of around 11,850, Nifty has seen a corrective phase in the last couple of weeks. 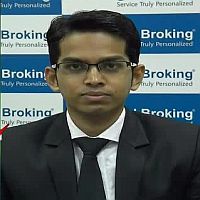 However, if we look at some of the recent historical data, it is seen that the index had shown an impulsive up move from late February to April 2019.

The recent correction, which is mainly on the back of the meltdown seen in global markets, seems to be retracing the previous up move and looks like just a corrective phase of the uptrend.

The retracement supports are placed around 11,220-11,070. Also, the 200-DMA on Nifty is placed around the second support mentioned above. Hence, an investor should use this dip as a buying opportunity and expect a resumption of the uptrend soon.

Q: Do you think the equity market is pricing an adverse outcome in the upcoming election results?

A: The recent up move in late February started after the Balakot airstrike that was conducted by the Indian Air Force.

This seemed to be a huge advantage to the existing government and things seemed to have changed in favour of BJP, which also lifted the sentiments of market participants.

However, the recent correction is mainly led by the weakness in global markets, on mounting fear of an adverse outcome of the trade talks between the US and China.

Hence, we believe that in spite of the correction, markets have not priced adverse outcome and participants are still expecting the election results to be in favour of the existing government.

Q: Given that FIIs have withdrawn nearly Rs 2,800 crore from Indian equity markets in May, how do you see their strategy?

A: In the last three months, FIIs had poured in significant liquidity and had bought equities worth more than Rs 58,000 crore. So, the sell-off figure in this month so far does not seem to be a concern as of now.

As far as their position in F&O is concerned, they had rolled over their long positions in the May series and their Long-Short ratio in index futures at the start of this series was around 75 percent.

Q: Considerable selling was seen in oil & gas and metals. Should investors avoid these two sectors as of now?

A: Within the oil & gas space, we have witnessed some stock specific momentum in the last few days. The index heavyweight Reliance Industries has corrected from its highs whereas ONGC has managed to outperform the broader markets.

The higher degree trend still continues to be positive and hence investors could use this decline to buy heavyweight such as Reliance Industries which is also approaching its 200-DMA support around Rs 1,210.

On the other hand, the metal index has corrected led by the heavyweight Tata Steel which corrected sharply on May 10. Until we see any signs of reversal, one can avoid bottom fishing in this sector.

Q: Does it make sense to invest in beaten-down midcaps if someone is looking at a time horizon of five years or so?

A: If we look at the weekly charts, then the midcap index seems to be more attractive (technically) than the benchmark index.

The Nifty midcap index had shown a price wise correction in the calendar year 2018, while it has consolidated in a range in this year so far.

So it seems that the price-wise correction is already done and now the time-wise correction may also be in its last phase. The 200-SMA on the weekly chart has acted as strong support in the recent past as well which is placed around 16,500.

So, from an investment perspective, if the market resumes the uptrend hereon, then the midcap space has a higher probability of outperforming the large-cap space in the next few months. This view will negate only if the Nifty Midcap 100 breaches 16,000.