Analyst tracking D-Street do not expect further downgrades to March 2018 consensus earnings per share (EPS), in fact, it could be the best in the last five years.

The Indian market has climbed every wall of worry in the year 2017 and the momentum continued in the year 2018 as well largely on hopes that the December quarter could witness earnings revival.

The September quarter was also better than estimates which gave confidence to investors about a possible turnaround in the December quarter. Analyst tracking D-Street do not expect further downgrades to March 2018 consensus earnings per share (EPS), in fact, it could be the best in the last five years.

"The EPS growth in FY 2019 could be best in last five years. The Nifty 50 consensus EPS estimates have been continuously revised downwards for the past three years. This is mainly owing to disruptions caused by the Reserve Bank of India’s (RBI) asset quality review, demonetisation and GST implementation,” Credit Suisse said in a note last week. 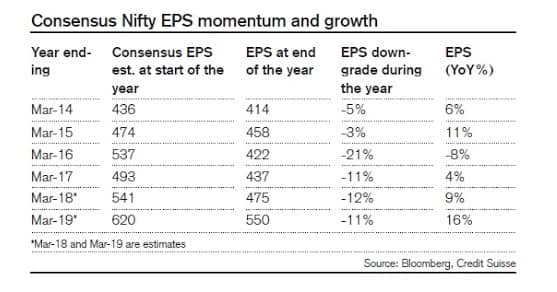 “We do not expect further downgrades to March 2018 consensus EPS, but for FY 2019 over 25 percent EPS, growth looks very optimistic to us. Nevertheless, even after assuming some earnings cut, if EPS settles to mid-teen levels, it will still be one of the best EPS growth years for Indian equities,” it said.

“The much-awaited second half of FY18 earnings season is here, and it has been much-awaited owing to expectations of a good earnings rebound from a low base – demonetisation had impacted select B2C sectors in Q3FY17,” Motilal Oswal said in a report.

“However, a deeper dive in Q3FY18 estimates suggest an interesting trend. The demonetisation-impacted sectors – FMCG, autos, cement, retail, media, and durables will rebound and post strong growth, a considerable push for earnings is coming from sectors that had a higher base -- metals, oil & gas, PSU Banks and NBFC,” it said.

We have collated a list of expectations from the sectors from different brokerage firms for December quarter:

Metals will report another strong quarter on a high base, led by strong underlying commodity prices and healthy volumes – profits are expected to grow by 81 percent on a YoY basis.

Hindalco, JSW Steel, and Tata Steel are expected to post 3.8x, 2.2x, 6.5x jump in PAT while Vedanta’s earnings are estimated to grow 29 percent on a YoY basis.

Autos will report a stellar quarter, driven by low base owing to demonetization and Tata Motors. Tata Motors is estimated to post a profit of Rs26.7 billion compared to a loss of Rs2.2billion in the base.

Axis Bank should post 37 percent growth on low base while ICICI Banks is expected to deliver 9 percent YoY decline in earnings.

While PSU Banks will report 32 percent YoY jump in profits, driven by PNB, BOB, and SBI. However, uncertainty due to NCLT mechanism can impact profits.

Consumer universe will report its first quarter of double-digit revenue growth after 13 quarters and 14 percent PAT growth, a 17-quarter high.

IT sector is expected to report another lacklustre quarter, with 4 percent PAT decline, a multi-quarter low. Amongst the tier-I names, only Wipro is expected to deliver earnings growth of 2 percent while Infosys, TCS, HCL Tech and Tech Mahindra are expected to post an earnings decline of 5 percent, 6 percent, 0.4 percent and 15 percent YoY, respectively.

Healthcare and Telecom will have a lacklustre quarter, as well, with 11 percent earnings decline for Healthcare while Telecom should post another quarter of the loss.

After a seasonally weak monsoon quarter (Q2FY18) and the adverse impact of GST-related uncertainties, we expect revenue growth of our coverage universe to bounce back in Q3FY18. Edelweiss expects the execution to increase 9 percent on a YoY basis.

The positive stance on the sector from medium-term perspective stems from: (1) improving revenue visibility due to strong order intake; and (2) government initiatives like the release of 75 percent of arbitration awards won by construction players.

After 4 quarters of muted growth, the consumer goods sector is likely to see high single to low double-digit volume growth in the December quarter. The Edelweiss consumer goods pack’s revenue and EBITDA growth are likely to be 10 percent and 12.5 percent on a YoY basis (Q2FY18: 6.4 percent and 10.5 percent), respectively in Q3FY18.

Volumes of consumer goods companies which rebounded marginally from GST related destocking is likely to resort to near normalcy. Together with this, soft base (Q3FY17 was marred by DeMon), as well as GST rate cuts, are also likely to aid growth.

Rural market and CSD channel are recovering, albeit at a slower pace. On the international front, the currency devaluation issue of MENA is now in the base and hence growth rate should look optically better.

Top Picks: Dabur, Britannia, and HUL. We also like Nestle and GCPL.

Singapore refining margin is down 13 percent QoQ following a very strong Q2. The Marketing earnings of OMCs could be hit following inadequate retail price hikes in the wake of rising international prices.

In addition to GST headwinds, sustained ramp up in private competition and digital discounts will also weigh on marketing performance.

Reliance (RIL) will benefit from the ramp?up of new capacities and commencement of competitive ethane imports. Higher feedstock costs will weigh on city gas margins. Sustained oil price momentum will hinge on the ramp up in US shale output.

Volumes are likely to rebound marginally from GST-related destocking and soft base (Q3FY17 was marred by demonetisation), as well as GST rate cuts, are also likely to aid growth.

In our view, revenue growth in wood panel category is likely to be higher at 21 percent on a YoY basis led by commissioning of new MDF plant by Century Plyboards, while tiles segment is expected to grow at a moderate 10 percent YoY.

Edelweiss estimate growth rates to be back on track from H2FY18 riding improving macros and favourable base. The Gross margin expansion is likely to be soft since companies have deferred price hikes, but have taken price cuts on account of beneficial GST tax rates, which have been passed on immediately.

All India thermal PLFs improved marginally to 59.75 percent and conventional installed capacity expanded ~1.5GW (up 1 percent) during Q3FY18. Merchant rates seem to have peaked out, at least in the near term, with an average tariff of Rs2.7/unit versus Rs3.5 in Q2FY18.

Initial signs of pick up in power demand are apparently led by improving traction in industrial activity and latent power demand.

However, sustainability of the same is pivotal and key monitorable. Regulated utilities—NTPC (BUY) and Power Grid (BUY) — remain Edelweiss preferred picks. It also maintains a ‘BUY’ on Adani Ports.