Experts see some volatility after pricing in most domestic events and feel that global factors, including coronavirus, may drive market sentiment

The rally in first four consecutive days, helped market recover 75 percent of Budget week's losses in the week ended February 7 — though the profit booking on Friday limit some gains.

Experts see some kind of volatility after pricing in most of the domestic events and feel that global factors, including coronavirus, may drive the sentiment.

"Since the overhang of Budget, RBI and major quarterly corporate results is behind us, the upcoming week could see dilly-dallying of bourses," Umesh Mehta, Head of Research of Samco Securities told Moneycontrol.

As major events are already taken care of, the Street will be largely guided by the global mood which is currently highly dependent on coronavirus, he said.

FIIs remained net sellers in week gone by also, to the tune of nearly Rs 1,000 crore, but DIIs managed to offset by buying more than Rs 2,200 crore of shares.

"FII inflows have remained volatile in the equity markets recently. If the big outflow figures are not seen, it may also lead to consolidation, going ahead," Amit Gupta of ICICI Securities said.

As we are in the last week of December quarter earnings season — which has so far been in line with analyst expectations about — 2,500 companies will release their quarterly numbers this week. These include Nifty50 companies like GAIL, Coal India, Hindalco Industries, BPCL, ONGC, etc.

Industrial production for December and CPI inflation for January will be important data points to watch out for in the coming week, which will be released on February 12.

CPI or retail inflation jumped to 7.35 percent in December due to rise in food prices, which is far ahead of RBI's target range of 4 percent (plus/minus 2 percent). It is likely to remain elevated as the RBI itself in its February policy stated that the inflation would remain above its target range in current quarter (Q4FY20) also at around 6.5 percent and 5.4-5.0 percent in first half of FY21. The same will be around 3.2 percent in Q3FY21.

After the industrial output grew 1.8 percent in November against a contraction of 3.8 percent in October, it would be key to watch out for whether it would expand further or not because the November figure was one of reasons for the momentum built up in market.

WPI inflation for January, deposit and bank loan growth for fortnight ended January 31, and foreign exchange reserves for week ended February 7 will be announced on February 14. Balance of trade data for January will also be released on same day.

Exit polls have predicted that Arvind Kejriwal-led Aam Aadmi Party (AAP) is likely to retain power in the national capital.

Globally all markets are worried about the impact of novel coronavirus on global economy and China — the world's second largest economy and biggest supplier and consumer of several products.

Several manufacturing plants in China are shut and as a result, Goldman Sachs recently cut its Q1CY20 real GDP growth forecast for China to 4 percent from 5.6 percent earlier.

Coronavirus has already taken lives of over 810 people and has infected at least 37,000 people in the China only. It has also spread other countries including India, Thailand, Philippines, UAE, etc.

Hence, it could be one of the reasons leading to volatility in the market in the coming week.

Stability in oil prices amid demand worries in China after the virus outbreak has lifted sentiment in Indian equities.

Experts expect the current stability in prices to help India to balance its fiscal deficit as the country imports around 80-85 percent of its oil requirement. Hence, it could continue to support Indian equities as long as demand worries persist.

International benchmark Brent crude futures continued to trade around $54-55 a barrel levels for couple of weeks now, against $65 levels before this virus outbreak.

The Indian rupee has been in the range of 71-72 against the US Dollar for three consecutive weeks despite negative FII flow and especially after sharp fall in oil prices amid coronavirus crisis.

Experts expect that the currency may remain in the same range in the coming week considering favourable oil prices and that impact of coronavirus on all emerging market currencies would be watched closely.

"Rupee resilience between 71 and 72 is likely to continue, which may also support equity markets from any deep profit booking trend," Amit Gupta of ICICI Securities said.

Rahul Gupta, Head of Research - Currency at Emkay Global Financial Services feels going ahead, if the number of infected cases (due to coronavirus) increases, then it will dent risk appetite even further, putting downward pressure on emerging market currencies. "Next week, we expect USD/INR to trade within 71-71.60, dollar flows related to D-Mart's QIP may cap the appreciation in spot," he said.

The Nifty50 managed to defend 200-DMA which was placed at 11,660 and rebounded over psychological 12,000 mark last week. The index closed sharply higher for the week and formed big bullish candle on weekly scale, though there was Bearish Engulfing pattern formation on daily charts Friday.

The February 7's consolidation seen after a sharp rally in previous four sessions of the week may remain in coming week amid a lack of major fresh triggers, but overall the sentiment may remain positive as long as Nifty50 holds 12,000 mark, experts feel.

"After a sharp rally in the previous week, we might expect some profit booking amid consolidation, so one should refrain from creating an aggressive long position at higher levels," Nilesh Ramesh Jain, Derivative analyst- Equity Research at Anand Rathi told Moneycontrol.

"Although, the short term outlook remains positive until Nifty holds above psychological support of 12,000, while on the upside it has a major hurdle around 12,200 levels. If Nifty manages to surpass 12,200 decisively then we might see Nifty hitting fresh life highs again," he said.

The Option data mentioned above indicates that Nifty could remain in a range of 11,800-12,200 in coming days.

"The Nifty has reverted strongly from the losses posted after the Budget announcement. The previously high Put base at 12,000 strike has again gained open interest pointing towards immediate support for the market," Amit Gupta of ICICI Securities said.

The sentiment indicator, India VIX fell 18 percent to end near 14 levels, which also gave comforts to the bulls last week.

Here are key corporate actions taking place in week ahead: Here are key global data points to watch out for in week ahead: 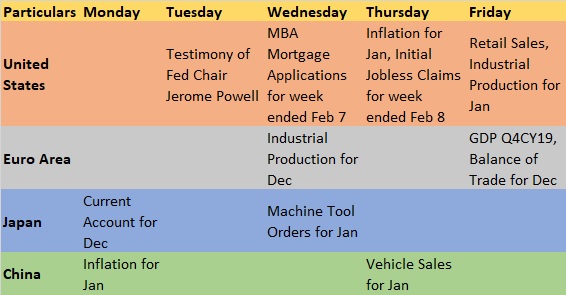