Market not in a bubble zone, best is yet to come; ignore IT, pharma for now: JM Fin

Gautam Shah of JM Financial remains upbeat on the market and sees a significant upside from this point. He recommends staying away from tech and pharma stocks.

With the market surging to all-time high levels, JM Financial remains optimistic about it going forward.

“The market is taking a very measured move past the 9,000-mark, which is a positive. From this point, it is likely to head significantly higher," Gautam Shah, Associate Director & Technical Analyst, JM Financial told CNBC-TV18 in an interview. The best is yet to come and we are not in a bubble territory, he added.

Having said that, he said that a small correction will not be surprising.

Going forward, he expects the banking index to lead the rally. He had earlier given a target of 25,000 for the Bank Nifty and expects it to be achieved in 3-5 months.

So, how do investors approach now? 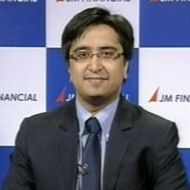 Shah highlighted that the base of the market had now moved higher at 9200. “All declines close to that level should be a buying opportunity,” he said.

The IT and pharma space witnessed a small comeback in the past two-three trading sessions. Is there a revival in the offing? “Simply stay away from these sectors as these are best ignored for now,” he told the channel.

Shah remains bullish on metals as he expects a big breakout soon. Once that happens the index and stocks in the sector will perform well, he said.

He continued to hold on to his stance of a monster rally in PSU banks. This was a segment which underperformed in the past 4-5 years. “We are now seeing breakouts on the monthly charts. When this happens, it gives super normal returns,” he told CNBC-TV18.

Meanwhile, Shah does not see much of a significant upside in capital goods. He prefers larger names in the space and said that there are many stocks available with a 6-12 month horizon that could be looked at.

He also remains positive on real estate and infrastructure. Many stocks have run up in the sector and the sector has come back after 10 years of underperformance, he added.

Anuj: Markets at all-time highs, the obvious question is what next, do you see this market now making a move towards a 10,000 mark?

A: Too early to say that. I think you need to just take it one step at a time. What we have noticed in the last few weeks is that the market is taking a very measured move once it has got past the level of 9,000. What you must have noticed is that the move from 8,000 to 9,000 was really quick and you saw great momentum, the market did not stop at any point of time, but this move beyond 9,000 is a little more measured which I think is really positive because the market is telling you that it does not want to run ahead of itself.

Having said that, I think there is no reason for acrophobia; I think this is a market which is likely to head significantly higher, just that it is going to take its time and the manner in which it is taking out one level after another and the beautiful sequence of higher tops and higher bottoms that we are witnessing, I think that tells you that clearly from a longer term perspective, there is a lot more upside. I think from a near-term perspective, we have been working with 9,500 as a target. We are almost within striking distance of that.

There are certain technical studies which suggest that around the 9,500 mark there could be a pit-stop. So, would not be surprised if there is a smallish correction from around those levels. However, barring that, once the Nifty gets past this particular level, I think that would really open up another 4-5 percent on the upside. Also, what we have noticed is the base of the market has gradually moved higher every time we have hit new life-time highs. So, while in my last interaction I talked about 9,000 being a possible base, I think that has moved higher to about 9,200 and therefore all declines close to that level should be used as a buying opportunity.

Also, there are people in the market who are fearing entering at levels of 9,200-9,300 and I am strongly of the view looking at the charts that there are no signs of topping out, there are no signs of a major reversal, and we are not in bubble territory. I think clearly the best is yet to come and the best is going to be far bigger than what we have seen in the last many years. So, investors need not worry, but traders, you need to always keep a watch on your risk reward and your exit strategy because at levels of 9,300, a 100 point knee-jerk can happen at any point of time and you should be in a position to really digest those moves if they happen.

Latha: What will take us to this 4-5 percent higher gains that you are expecting in the Nifty, who would be the leaders?

A: It has really been the banking story. It has been a very fairytale kind of run that the Bank Nifty has witnessed. In fact, even in our last interaction, I gave a target of about 25,000 for the Bank Nifty which is still about 2,000 points away from where we are right now. So, for an investor I think that is the target to look forward to and I guess we should see those levels in the next 3-3.5 months itself and therefore there is a lot of juice for the Bank Nifty. Obviously if the Bank Nifty does well, it is like the pied piper, it takes the Nifty along with it. So, I would like to believe that the Bank Nifty index should continue to rally.

Yes, it is looking overbought, but in strong uptrends and when you have indices trading at lifetime highs, and when you don’t have levels to look forward to because you are trading in uncharted territory, the markets can just keep moving from strength to strength and in such situations I think it is important to look at the moving averages, a technical study that works very well in trending markets. So, I think the banks will definitely take this market higher.

We spoke about the PSU banks last time and I think many of them are up anywhere between 20-50 percent already and even from current levels we see appreciation of 50-80 percent in the PSU banking space. Private banks, after a little bit of correction in the last few weeks, are now coming back once again. So, I do see strength as well. However, purely from a risk reward perspective, we would be much more comfortable in the PSU banking space.

Sonia: Two spaces that have not participated in the rally are technology and pharmaceutical. All these names are down 6-15 percent for the year. You see any kind of trend reversal there?

A: Not at all; simply stay away. I think these are sectors that will continue to underperform. There will be patches or there will be phases when they will do well and you will get the feel that okay now the reversal is happening, but I don’t think it is going to happen. Clearly the money is not there, the money is not following these stocks. In terms of relative strength, there is nothing to look forward there.

When you see the kind of moves in the markets, particularly the midcap and the smallcap space with so many stocks moving up 5-10 percent just like that, why do you want to commit in sectors which are languishing and are finding it difficult to move up even 3-4 percent. So I do not see any signs of reversal. If you look at the CNX-IT index, it has just got stuck to that 10,000 mark. It might just oscillate in a 500 point range and therefore it is best ignored for now.