Nearly 450 stocks out of BSE 500 reported double-digit gains from their March lows, whereas around 25 stocks were in the red

While the number of COVID-19 cases are still on the rise, the stock market is in upward trend on the hope that opening up of economic activities will bring back growth.

The benchmark indices have in fact gained 37 percent each from their recent lows recorded on March 23.

The rally in global equities on the back of liquidity boost after global central banks infused trillions of dollars into their economies also lifted sentiment on the Street.

Sectoral indices also reported double-digit gains during this period. Pharma was the biggest gainer with 60 up move following lot of demand for drugs which can minimise the risk of COVID-19, while other indices rallied between 27 percent and 51 percent.

While indices witnessed double-digit gains, these 33 stocks out of BSE 500 turned multibaggers in a short span of three months. 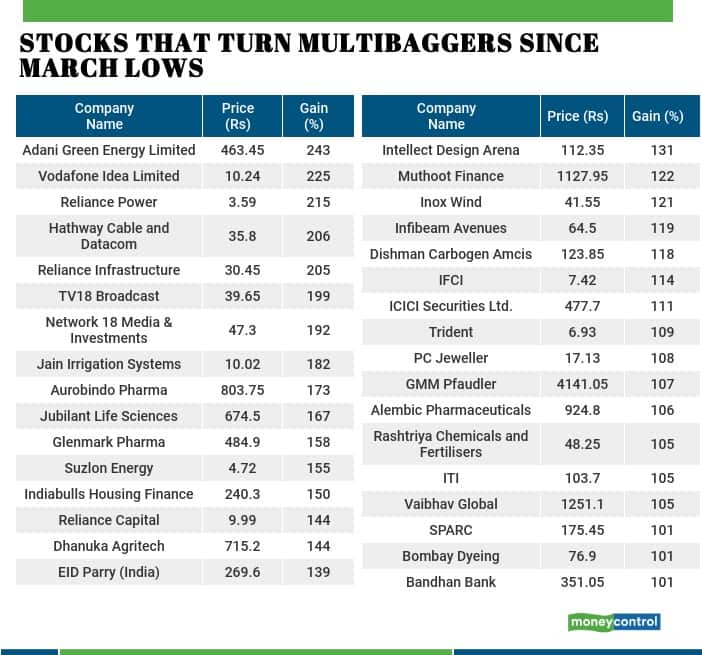 Nearly 450 stocks out of BSE 500 reported double-digit gains from their March lows, whereas around 25 stocks were in the red.

Experts feel momentum is expected to continue going forward but with intermittent correction and consolidation, and if the liquidity continues and vaccine is found for COVID-19 then it could move faster.

"As and when we have an effective vaccine, markets will respond positively at that time. As of now 11,000 seems to be the best case scenario for Nifty-50 based on earnings and valuations," Rusmik Oza, Executive Vice President, Head of fundamental Research at Kotak Securities told Moneycontrol.

The broader markets participation equally with benchmarks was the key in this rally as in previous two years, Midcap and Smallcap indices underperformed significantly to benchmarks after stellar rally of 50-60 percent in 2017.

Management commentaries from various companies across sectors are pointing out towards a pent-up demand which at least takes care of the near term, he said, adding the Mid/small caps have been underperforming the larger peers over the last 2 years.