Lockdown impact: FPIs pulls out money from these 10 sectors in April, where is smart money moving?

Most of the sectors in which FIIs invested heavily over the past 12 months are linked to the economy and any disruption in business activity led to profit-taking, say experts. If the coronavirus situation doesn’t improve, FIIs will continue to pull out money and wait for the market to bottom out.

The Nifty ended flat in April but foreign institutional investors (FIIs) pulled out $1.29 billion from the market, the highest since March 2020. This is in sharp contrast to FIIs pumping in $ 26.8 billion, including $7.6 billion in the first three months of 2021, in equities between October 2020 and March 2021, data from Edelweiss Securities shows.

Banking and financials ($ 1.12 billion) saw the highest outflows in April followed by oil and gas ($466 million) and metals and mining ($ 242 million).

The sectoral weightage in banking & financials now stands at a six-month low of 32.7 percent. Oil & gas is at 11.3 percent and metals & mining is at 2.4 percent.

Most of the sectors that saw outflows are likely to be hit in the short term due to lockdown-like restrictions imposed by various states, which have hampered business activity as India amid record rise in coronavirus cases.

“COVID 2.0 has challenged the GDP growth forecasts and continued lockdowns are further adding to uncertainties. Fear of NPAs (non-performing assets) and a slowdown in traffic activity as per Google index are further pointing towards negative sentiments,” Divam Sharma, co-founder at Green Portfolio Services said.

FIIs were reallocating their money to defensives and value stocks. “Some of the sectors like banking, oil, and gas have seen a huge run-up in FY 21 and are witnessing profit booking from FII’s,” he said. 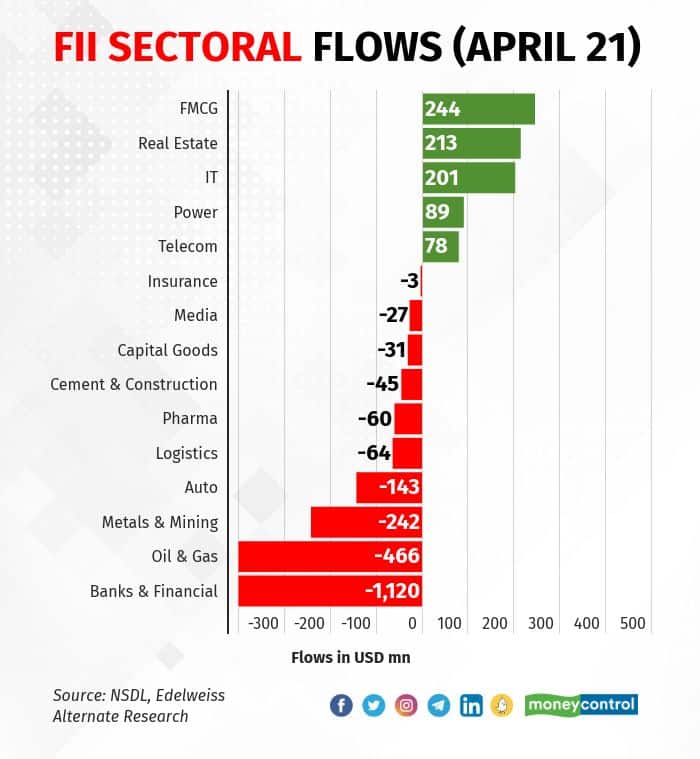 In the last 12 months, FIIs have heavily invested in sectors linked to the economy and halt in business activity triggered bit of profit-taking, experts said.

“India had an unprecedented rise in COVID infections in the month of April, forcing many state governments to impose restrictions similar to lockdown, this resulted in slowing down of the economy,” Atish Matlawala, Sr Analyst, SSJ Finance & Securities, said.

“Sectors like banks, oil & gas, and autos which are directly related to economic activity are expected to take a hit due to the second wave of COVID and hence FIIs turned sellers in these sectors.” The allocation could shift towards defensives if the lockdown gets extended. Uttar Pradesh and Delhi have now extended restrictions till May 17.

“As there is growing concern of the impact of second-wave and anxiety on the street and the country, it would be advisable to revisit the portfolios and rebalance it and prioritise defensive sectors and the stocks which have a track record of doing well in such crisis,” Gaurav Garg, Head of Research at CapitalVia Global Research Limited said.

“If the situation persists like this in the country and with no concrete signs of improvement, institutions are expected to pull out money now and wait for the markets to bottom out from where they can again have value picks and deploy their funds,” he added.