Also read: Market lost over 3% amid Ukraine crisis: All sectors in the red, FII selling continues 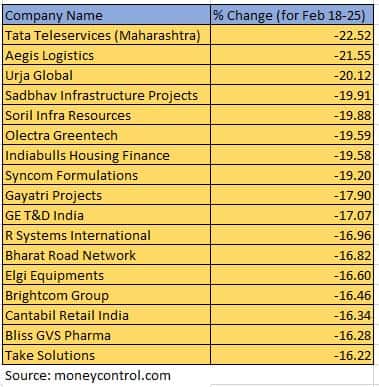 "Our markets started the week on a sluggish note on Monday as uncertainty with respect to Russia and Ukraine was still looming over. Due to this tentativeness, the volatility increased a bit and Nifty kept flirting with the key support zone of 17000 – 16800 for nearly three sessions," said Sameet Chavan, Chief Analyst-Technical and Derivatives, Angel One.

"However, on Thursday, Russia finally invaded its neighboring country which had a complete outburst of fear across the global financial markets. We were certainly not spared with it and as a result, the Nifty first opened with a massive cut and as the day progressed, the sell-off aggrandized to thrash all immediate supports one after another. Before anyone could realize, Nifty slid to 16200 which was the lowest level in last seven months."

"Things looked extremely bleak at one point but fortunately globally there was some relief and hence, our market too had a sharp recovery on Friday to recoup some portion of losses. Despite this, Nifty ended the week below 16700 with a cut over three and half a percent to the previous weekly close," Chavan added.

"Nifty started the week around 17200 but we witnessed significant volatility throughout the week. Initially it seemed that markets have formed a support base at 16800 as it rebounded again from that level, but the same was breached with a gap down opening on the February expiry day. Nifty ended expiry session tad above 16200 but it recovered on Friday with a gap up and ended the week above 16650," said Ruchit Jain, Lead Research, 5paisa.com.

"It was indeed a difficult week for traders as volatility was much higher in the markets which led to swings on both sides. The escalated geopolitical tensions between Russia and Ukraine created panic amongst market participants on the expiry day which led to a deep cut."

"However, off late our markets have been reacting more to the global developments only and hence a recovery in the global markets led to a recovery in our indices as well on Friday," Jain added.

While markets have seen a pullback – volatility is expected to remain high over the next few days. Market will be keeping a close watch on the ongoing Russia Ukraine conflict over the weekend for any further cues.

For the near term, Thursday’s low of 16200 may act as a strong support. While traders need to remain cautious of sharp volatility, Investors can use the current dip to gradually add quality blue chip companies in their portfolios.

Participants shouldn’t read much into a single-day rebound and wait for further clarity. In case of a further rebound, 16,850-17,000 zone would act as a critical hurdle in Nifty.

The looming uncertainty over the geopolitical tension combined with the rising crude would keep the participants on the edge in the following sessions. We thus recommend staying light and keeping a selective approach until the situation stabilises.

The level of 16800 was earlier acting as a crucial support & has now changed its role to that of a resistance. Unless that level gets taken out on a closing basis the index can witness a consolidation in the range of 16200-16800.

Going ahead investors will continue to remain cautious by keenly watching the developments in the Russia-Ukraine war. In such a volatile market a prudent approach is to have a balanced portfolio with a mix of equity, debt, gold, and cash.

It is also a busy week in terms of the release of macroeconomic data points like domestic GDP and Manufacturing & Production PMI data.

Prevalent geopolitical tensions will continue to take centre stage and will be a primary driver directing market direction and investor mood internationally.

If the current state of conflict between Russia and Ukraine continues, markets may sink even further into the red sea. In addition, the domestic economic calendar will have an impact on D-Street, as quarterly GDP results, auto sales figures, and manufacturing PMI readings are all due in the next week.

Given the various trigger points and growing uncertainty, investors are recommended to exercise extreme prudence in the short term and avoid any aggressive trades.

Disclaimer: The views and investment tips expressed by experts on Moneycontrol.com are their own and not those of the website or its management. Moneycontrol.com advises users to check with certified experts before taking any investment decisions.
Rakesh Patil
Tags: #Market Cues #Market Edge #Nifty #Sensex
first published: Feb 26, 2022 10:32 am