We believe the equity markets may not have a lot of upside from current levels, says R Venkataraman of IIFL Securities.

A spending plan of three to five percent of GDP directed at small businesses, low- income households and financial sector along with long-pending reforms can drive a rapid recovery but the absence of such measures can extend the slowdown into FY22, R Venkataraman, MD, IIFL Securities, tells Moneycontrol's Sunil Shankar Matkar in an interview.

Q: The market recovered 31 percent from March lows but in May its again losing steam. Do you think the market is cautious, given the delay in announcing a bigger stimulus package from the government? What are your thoughts on the year ahead?

Though the benchmark Nifty Index is around 25 percent below peak, earnings estimates have also been downgraded by around 17 percent in the last three months and hence the valuations have seen a modest compression. 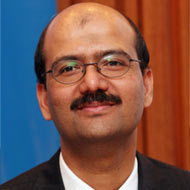 Also, the consensus estimates imply around 11 percent YoY Nifty EPS growth despite the recent cuts. This assumption is quite unreasonable given the weakness in economy and hence we could see further earnings downgrade through the years. A half-hearted government response to the crisis could be a drag on FY22 growth as well. We believe the equity markets may not have a lot of upside from current levels.

Q: Do you think the government will announce a bigger stimulus package? What are the measures that can revive the economy once the lockdown ends?

The government has announced a fairly small package, so far, and although it has dropped hints of a larger spending plan, there have been no announcements so far. The government seems to be reluctant to announce large spending plan either due to the memory of response to global financial crisis that eventually led to macro instability (high inflation, twin deficit, twin balance sheet stress) or on worries of ratings downgrade. However, these fears are not justified as the macro imbalances crept in due to prolonged stimulus rather than the stimulus plan itself. Also, growth rather than public spending is likely to have higher importance for rating action.

Q: Everyone is saying there are a lot of opportunities in the market to pick from. What should one buy to create wealth in the next couple of years?

Apart from pharma, we like insurance as a theme. We expect SBI Life and ICICI Lombard to do very well in the medium term. Companies like Hindustan Unilever will establish their leadership even more strongly, as will Pidilite.

In the banking space, Kotak Mahindra Bank and ICICI Bank will do well. Telecom will also continue doing well and Bharti Airtel should outperform even from here, despite being up nearly 55 percent in six months.

Q: Pharma has been the star performer, with the Nifty Pharma index rising 45 percent from March lows. Do you think the momentum will continue and will pharma lead the next bull run?

Pharma will continue delivering upside over the next two-three years. The US business profitability is set to improve over the next two years. We prefer Cadila Healthcare, Dr Reddy's Labs and Aurobindo Pharma, as they have the best product fit to take advantage of the circumstances. For these three companies, the valuations are also not too rich. The broader market is likely to continue to remain unpredictable for some time.

Q: The auto sector has taken a huge beating. Do you think one should look at the segment now, given the attractive valuations, or is it better to stay away?

Auto should do well from a two-to-three-year perspective. Within the sector, one should limit to Maruti Suzuki and Eicher Motors. The recovery maybe slower in autos in the near term due to some dependence on SME suppliers. However, Maruti Suzuki and Eicher Motors are cash-rich companies. I would also add Bharat Forge as a stock to be picked up when the market bottoms.

Q: Have you seen a change in the behaviour of retail investors in the COVID-19-led steep fall compared to earlier crises (2008 global financial crisis, the year 2000 IT boom, etc.)? Recent data from NSDL and CDSL shows that more than 12 lakh demat accounts opened in March and April alone against 42 lakh in the April 2019-February 2020 period.

Retail investor participation, so far, remains promising. Mutual fund collections, a proxy to retail investor sentiment, remain healthy and suggest that retail investors continue to prefer equities as an asset class. Also, the recent interest rate cuts make investing/saving avenues like small savings and bank deposits relatively unattractive. Gold, as an asset class, has been performing well for last several months. However, the trade data on gold suggests that it remains out of favour with households for now.

Q: Everyone is saying FY21 will be a bad year for economy and corporate earnings. What do you think? Given the coronavirus situation, do you think FY22 will be a recovery year?

The extent of government support will be important for FY22 growth. While a spending plan of 3-5 percent of GDP directed at specific areas like small businesses, low income households and financial sector along with long-pending reform measures can drive rapid recovery, a tepid spending plan or lack of reform measures could prolong the slowdown into FY22 as well.