From humble beginnings, both Kotak Bank and Yes Bank have come a long way over the past decade, becoming institutions of importance to the financial system. While Kotak Bank has created a credible organisation, RBI’s refusal to allow the promoter to continue owning 30 percent means the bank will have to look at acquiring another player to comply with the promoter stake rule (of bringing down stake to 20 percent) by the year end.

Yes Bank, on the other hand, is suffering from a crisis of credibility with RBI curtailing the term of the founder CEO Rana Kapoor. Though it is still early days, one wonders if RBI may be open to the idea of a large sized bank like Yes being steered by a more credible team? Does it make sense for Kotak to look at Yes to so that it can comply with the RBI rule and at the same time, scale up operations. 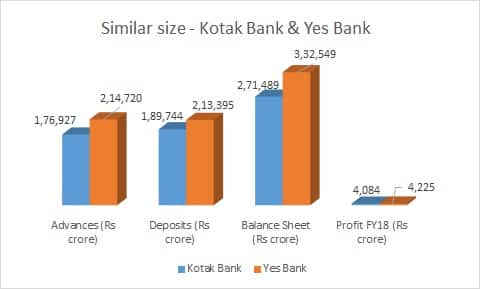 Kotak and Yes are similar in size and both have a formidable track record. Kotak adopted a well-diversified strategy with focus on retail as well as large/mid-corporate, and Yes Bank chose to have a predominantly corporate focus. Many were surprised that Yes was able to maintain asset quality amid the rising tide of non-performing assets in the corporate space. Yes Bank’s loan book is not something that will prima facie excite Kotak, but might be worth a look at the right price. The size of the acquisition that Kotak Bank would be required to do in order to bring down the promoter shareholding is substantial (in excess of Rs 100,000 crore) and there are not too many players that are up for sale of that size. While the name of Axis Bank has been doing the rounds, post the rapid clean-up of the asset quality mess, a successful capital raise and an already enviable liability profile, the stock is being re-rated and the bank looks set to accelerate the growth pedal under the new leadership. 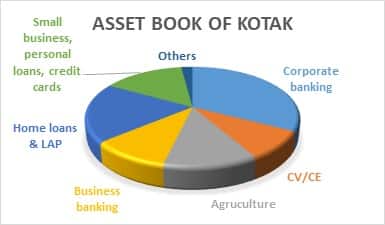 Yes, on the contrary, is in the eye of a storm. While the reported numbers look fine, the issue is about governance and compliance. Under these circumstances, only a name-sake CEO change may not satisfy the regulator. With the asset book not particularly a draw, what else could Yes have to offer?

Over the years, Yes Bank has built a formidable deposit base of close to Rs 213394 crore and close to 57 percent of this comes from low-cost CASA (although at a differentiated rate similar to Kotak’s) and retail term deposits. At the current market capitalisation of Yes Bank, the deposit book is available for 0.22X of its market capitalisation as against 0.9X for Kotak’s (adjusting for value of subsidiaries). Yes has a network of 1105 branches, tad lower than Kotak’s 1391. A growth of close to 4 years can be achieved in one shot.

Mr Kotak is a savvy deal maker and has a successful track record of not over paying for what he buys. The steep correction in the stock price of Yes has completely eroded the valuation premium that it enjoyed prior to this episode.

In the absence of a close scrutiny of the book, we focus on the historic book that suggests that the stock is currently trading at 1.8X its reported book of FY18 (as against Kotak’s trailing valuation of 4.4X banking book). However, the value of the book remains a question mark, depending on the asset quality surprise.

Should Kotak pays a premium (at 2.5X its historic adjusted book), over Yes Bank’s prevailing share price, the promoters’ stake in Kotak Bank will get reduced substantially.

It remains to be seen how regulator decides on the fate of these two entities in the coming months. Till then, from the investors’ perspective, they remain stocks to keep an eye on.