Historical data for last 11 yrs suggests June belongs to bulls; will it be different in 2019?

Benchmark indices have rallied about 10 percent so far in 2019. They have registered most of the gains in May post Lok Sabha election results as a stable government at the Center raised hopes of continuity of reforms

Sensex and Nifty started the sixth month of the calendar year breaking records. Both benchmark indices created new record highs on the very first trading session in June—Sensex hitting 40,312.07 while Nifty climbing to 12,103.05 intraday on June 3.

Historically, bulls have controlled the D-Street in the last six out of eleven years, data from AceEquity showed. 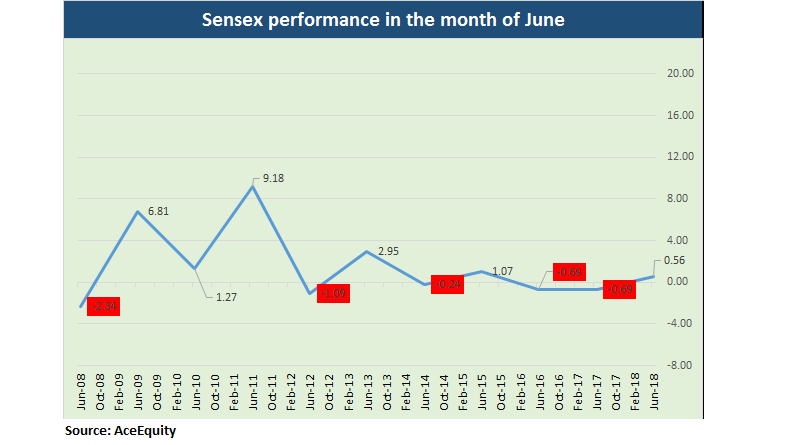 Benchmark indices have rallied about 10 percent so far in 2019. They have registered most of the gains in May post Lok Sabha election results as a stable government at the Center raised hopes of continuity of reforms.

Apart from political stability, fall in crude oil prices, a possible rate cut from the Reserve Bank of India (RBI) and expectation of near-normal monsoon fuelled the rally.

“Firstly, the investors would keep a close watch on the upcoming RBI monetary policy scheduled on June 6. After a thumping victory by the NDA government, the hopes amongst participants have definitely increased for a rate cut in the upcoming policy meeting,” Jayant Manglik, President, Retail Distribution, Religare Broking Ltd told Moneycontrol.

“Further, the progress of monsoon would also be crucial for the markets as any major deficit would hurt the already muted consumption demand in the Indian economy. Additionally, the focus would shift back to global cues, which has been volatile due to US-China trade war and political uncertainty in the UK,” he said.

Although history suggests bulls have an upper hand but the verdict from experts remains fairly mixed. Given the market is trading near record highs, there is a possibility of some profit booking at higher levels.

“June might not turn out to be as hot and fiery as the mood is now and if looked at the current scenario in depth, fresh highs are not supported by enough fire. The volumes are average, FIIs and DIIs have been net neutral amongst themselves and on top of that there are no significant fresh inflows from the domestic investors; SIP inflows are nonetheless stable,” Umesh Mehta, Head of Research at SAMCO Securities, told Moneycontrol.

“These are no conditions for a genuine breakout and therefore this could turn out to be a mirage. Traders might end up buying at the intermittent top and therefore it is time to remain cautious,” he said.

Nifty has already rallied above 12,100 in June but any meaningful upside from current levels remains fairly capped.

“Rollovers towards June series do suggest that we may be entering a short term trending period. It is a matter of time that we may see some trend developing. 11,800-12,200 is seen as a range for now on the basis of derivatives data,” Mustafa Nadeem, CEO at Epic Research, told Moneycontrol.

Foreign institutional investors (FIIs) have been net buyers in June in seven out of the last 10 years, according to data from AceEquity.